My Third Day In Berlin

I started my third day in Berlin with breakfast at Bell Chico again. I ordered the American Breakfast which was three pieces of toast, scrambled eggs, and various other odds and ends. The only thing they got wrong is using little hot dogs instead of sausage. Nobody has hot dogs for breakfast. They should have used little links sausage.

I took the U-Bahn again, the U2 line, all the way to the Zoologischer Garten and finally reached Kurfurstendamm avenue. I was disappointed to find the Kaiser Wilhelm Memorial Church completely covered in scaffolding. The scaffolding was covered in glass which concealed the church. It looked like they were trying to hide it as an office building. So I did not get to see this landmark and I could not take any photos of it. Since the church is in ruins I suppose it does need some repairs every now and then to keep it from collapsing. 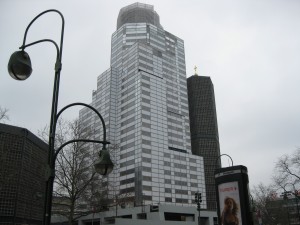 But I did see the Europa Center, the Berlin “broken chain” sculpture on Tauentzienstrasse, the KaDeWe department store, the French Institute in Berlin, and the Story of Berlin Museum which is easy to spot because its street sign is an aircraft wing. 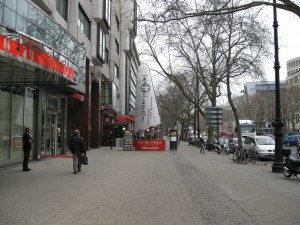 First I went to the Story of Berlin museum. The exhibits were very clever although some people might find them a bit tacky. There was a large group of German teenagers being given a guided tour. I did see a film poster for one of the obscure German movies I want to learn more about, Dr. Mabuse, der Spieler directed by Fritz Lang. According to Wikipedia, this is a silent film which explains how it escaped my notice. I was amused to see Otto Dix’s The Dancer Anita Berber used as a backdrop in part of the exhibit. 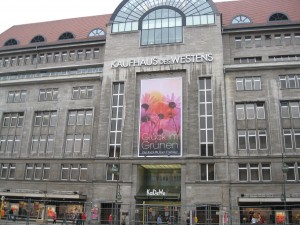 After that I went to the KaDeWe (Kaufhaus des Westerns) department store because they have an extensive newsstand. I took the elevator to the 5th floor where they sell DVDs. I saw a lot of interesting movies but eventually settled on Herr Lehmann, an amusing story about a resident of Kreuzberg. I’ve read the English translation of the novel. I don’t know if I’ll have time to visit Kreuzberg. Maybe I should try to get down there on Friday. At the newsstand on the 6th floor I bought a copy of the magazine dotnetpro, Das Profil-Magazin fur Entwickler. This was my one concession to my profession. They will get a real kick out of it at the office. It should also help me to expand my German vocabulary with terms used in my profession. I also bought copies of the Berlin newspapers, Berliner Morgenpost and Berliner Kurier. The cashiers at KaDeWe don’t seem to speak any English and it was slightly awkward when I tired to pay for the DVD at the newsstand, which apparently is not where you pay for anything except items from the newsstand.

I then went to the Europa Center and took a photo of the water clock. I had lunch at Kentucky Fried Chicken because I didn’t feel up to a real restaurant. The cashier also did not speak English so I was left with the impression that Mitte is the better district for English speaking tourists.

After lunch I took the U-Bahn back to Alexanderplatz and freshened up in my hotel. Then I finally visited a museum on Berlin’s Museum Island. I went to the Neues Museum which now holds the Egyptian collection including the famous bust of the Egyptian queen Nefertiti. This is one of the iconic symbols of Berlin’s museums so it was great to see it. There was a strict “no photography” rule enforced for the bust but you could take photos without flash everywhere else so I got some pictures of skeletons and sarcophagus. I don’t know the plural form of “sarcophagus” because this word is rarely used in the plural. You never stop learning your native tongue. 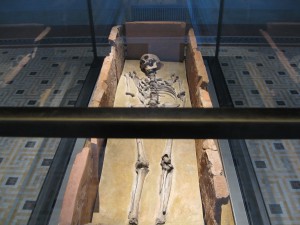 Outside the Altes Museum, were I was just photographing the exterior, I was accosted by some really persistent Romanian Gypsy beggars just like the ones that plague Paris. I had to give some coins to a little beggar boy who just would not go away. They kept asking me what language I speak even though I kept mute. I found a Speigel article that explains it “Berlin authorities are puzzled. A group of Roma families from Romania have arrived and appear intent on staying, despite only having limited tourist visas. The conundrum could be a foretaste of immigration riddles to come.“ The Roma are a plague on tourists all over Europe. I bet they have infested London as well. It may be worthwhile to learn some Romanian insults to use against them.

I had a dinner at Dolores Gourmet Burritos, a restaurant near my hotel. I picked up a free copy of Exberliner magazine at my hotel. Exberliner is a magazine for English expats in Berlin. There must be a lot of people from the UK living in Berlin to support their own publication, printed in full color. According to a restaurant review, its staff likes to eat at Dolores and I did see someone reading Exberliner there. Maybe I’m in the heart of the English expat community!

One Response to My Third Day In Berlin