On Saturday, July 15, 2017 I made my first trip to Gettysburg PA. Gettysburg is two and a half hours from Williamsport so it is not that far away but I don’t like driving south on Route 15. That highway along the Susquehanna River is very boring with few landmarks. I left Williamsport around 7:00 a.m. and arrived in Gettysburg by 9:30 a.m. I parked in the Racehorse Alley Parking Garage. It cost me $10.00 to park there for the day. I parked in the spot numbered 340 which I then had to input into the electronic parking meter near the pedestrian exit. It would not accept cash.

My goal on this trip was to explore the town. I did not visit the battlefield because I plan to make an overnight trip to Gettysburg on August 5th, leaving August 6th. I will have more time to explore the Gettysburg Battlefield on that trip. I am still in the process of creating a custom travel guide for Gettysburg so this was like a scouting party trip to gather intelligence. I took lots of photos to use in my travel guide. The first things I saw were the Lincoln Diner and the Majestic Theater. After walking to Lincoln Square I went down Chambersburg Street where I found the Garryowen Irish Pub. After crossing the street I photographed The Parrot and the James Gettys Hotel. 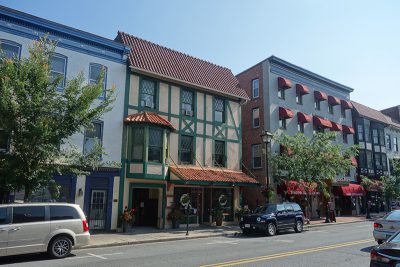 I then walked far down Baltimore Street. There were several establishments I wanted to photograph along this street because the retail stores are not well documented online. I found The Antique Center of Gettysburg and Ping’s Cafe and many other establishments which I haven’t even added to my notes yet. Eventually I made it all the way to where Baltimore Street branches off to Steinwehr Avenue. This area was of particular interest since I have a reservation at the 1863 Inn Of Gettysburg for my overnight trip. I made sure to photograph the Irish Brigade Gift Shop, the Blue and Gray Gift Shop, and Rita’s Ice Custard Happiness which are all located near the hotel. I think I tried to visit the Jennie Wade House at this point but they did not appear to be open even though they should have been open since 9:00 a.m.

The third substantial retail street in Gettysburg is Steinwehr Avenue so I walked far down that street next. I passed the Sunset Ice Cream Parlor which was of some interest since they are based in Williamsport. I also saw the Dobbin House Tavern. I went pass Tommy’s Pizza and the Gettysburg Diorama History Center. I walked as far as the Lincoln Train Museum next to the Best Western hotel before crossing the street to visit the Gettysburg Heritage Center. 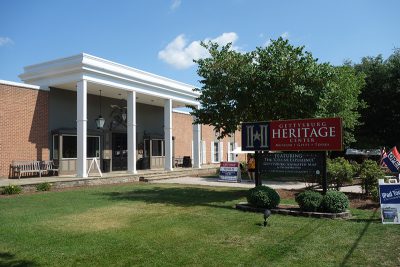 The Gettysburg Heritage Center was the first establishment I entered during my trip. It was a small museum with very few artifacts or exhibits. But it did have several videos to watch with some 3D photos and 3D videos. Admission was only $8.95 and that was reasonable given how little there was to see. I saw a short film in their movie theater which played before a sunken area filled with dummies of Civil War soldiers in a battle scene. The gift shop had an impressive collection of books on the Civil War and Abraham Lincoln. I bought the book Guide to the Battle of Gettysburg: Second Edition, Revised and Expanded which is actually a guide to the Gettysburg National Military Park. I’m not terribly interested in the Civil War but I did see the 1993 film Gettysburg and found it strangely inspiring.

After leaving the Gettysburg Heritage Center I found my way to the nearby Soldier’s National Cemetery where there were a few huge monuments to see. I also found the Lincoln Address Memorial. I hadn’t actually researched this cemetery so I was pleased that I managed to just stumble across what was to be seen there. I walked back up Steinwehr Avenue and stopped off at Sunset Ice Cream Parlor where I ordered two scoops of coffee ice cream in a cup.

I then walked all the way back to Lincoln Square and dropped off the book in my car which was stilled parked in the Racehorse Alley Parking Garage. I stopped in at the Gettysburg Railroad Station which has a small museum and a tiny gift shop. I was then ready for lunch so I went to The Parrot on Chambersburg Street where I ordered a Bacon, Lettuce, and Tomato sandwich. It came with a small cup of coleslaw, some potato chips, and a dill pickle. The potato chips were small but surprisingly good so I ate all of them first. 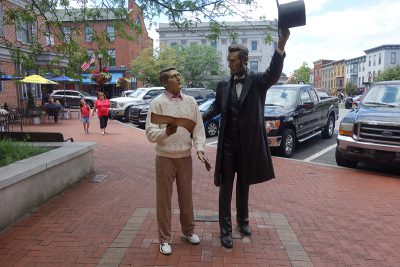 After lunch I circled Lincoln Square and found the cheesy Return Visit sculpture of Abraham Lincoln guiding a tourist. But my major objective was to walk along York Street and photograph all the establishments to be found there. I was surprised to come across the Gettysburg Community Theatre because I had not come across any references to it in my research. It is possible that this is not a genuine community theater. The sidewalk sandwich board was advertising Civil War Voices which sounds like a permanent show intended as a tourist attraction. But after looking at their web site it appears to be a legitimate community theater.

My stroll along York Street concluded my exploration of the downtown area so I ventured to enter a few more establishments. First I tried the Antique Center of Gettysburg, one of those antique malls with glass cases for various antique vendors. Most of the antiques were military memorabilia but there was also a good selection of military books. I’m not really into military stuff so I didn’t find anything I was tempted to buy. I went upstairs but I only found one room with a small amount of goods for sale. It was like an empty apartment up there and not worth climbing the steep steps.

Next I visited the Gettysburg Museum of History which was a free museum on Baltimore Street. This museum was essentially a residential house jam packed with some surprisingly high quality artifacts. Most of the artifacts were military in nature but not exclusively from the Civil War. I also saw plenty of Nazi and World War II artifacts. There was even an Egyptian mummy’s head and a room of John F. Kennedy memorabilia. I had to wonder if all this stuff was authentic but it looked pretty real. I put $5.00 in the donation box since this free museum did not disappoint. It was definitely worth visiting.

The final museum I went to was the Shriver House Museum. This was a private house where Confederate sharpshooters holed up during the Battle of Gettysburg. In the gift shop I paid $8.95 for a tour of the house led by an elderly woman in period costume. She led a large group of tourists through the rooms of the house. It was a little crowded. We visited the parlor, the bedrooms, the sitting room, the attic, and the basement saloon. After the tour was over I went back to the gift shop and bought a small metal replica of a Civil War rifle which made for a good souvenir.

After that I walked way up Baltimore Street and entered the Blue and Gray Gift Shop. They were mostly selling t-shirts although I saw a few swords which may have made a nice gift, but they were a bit expensive. I didn’t really find anything to buy there. So I walked even further along Baltimore Street until I reached the Soldier’s National Cemetery. There I noticed many Civil War monuments across the street on Cemetery Hill. I crossed the street and checked out the canons and monuments on Cemetery Hill. This was the only part of the Gettysburg Battlefield I actually saw on this trip. I also noticed the Evergreen Cemetery across the street where I quickly found Jennie Wade’s grave because there was a family of tourists around it. I was quite pleased to have found that without having done the necessary research to locate it. I wandered around Evergreen Cemetery a bit because it had many fancy tombstones and interesting graves. It was quite similar to many other Pennsylvania cemeteries which I have visited. Most of them have at least one Civil War monument. I used the rest room in the nearby Soldier’s National Cemetery. 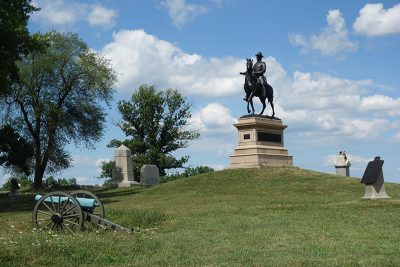 By this time I was getting very hot so I went back up Baltimore Street and bought an Italian Ice at Rita’s Ice Custard Happiness across from the 1863 Inn Of Gettysburg. I then slowly walked back to Lincoln Square and returned to my car. There I discovered that I had left my car window down the entire time I was exploring Gettysburg. I wasn’t sure if I had actually left my driver side window down, but I suppose I did, expecting to get a parking ticket like they issue in Williamsport’s Church Street Garage.

Overall Gettysburg is a great little town for the tourist. I would put it with Jim Thorpe and New Hope as one of the best tourist destinations in Pennsylvania. Like those towns it was a bit too crowded with tourists to qualify as a typical small Pennsylvanian town, but the advantage is that there is more to do there.

I plan to concentrate on the Gettysburg Battlefield during my overnight trip in August. I will head straight to the Gettysburg National Military Park and maybe take a bus tour. Maybe I will be able to find something to do Saturday evening. Meanwhile I am reading the novel The Killer Angels by Michael Shaara at work during my lunch breaks. I can read a chapter a day. The novel is virtually a novelization of the 1993 film Gettysburg because the film used all of the dialogue and even some text which is not dialogue in the book.