Yesterday I made my second trip to Gettysburg, just one week after my first trip. On this trip my goal was to see the Gettysburg National Military Park and more of the battlefield.

I left later than I intended after 8:00 a.m. and did not reach Gettysburg until 11:30 a.m. Along the way I stopped at a Sheetz near Duncannon for a restroom break and an used bookstore in Enola PA. Enola is a suburb of Harrisburg near Marysville on Route 15. Most drivers avoid this part of Route 15 but I follow it just to keep my driving directions simple. Norfolk Southern operates a large rail yard and locomotive shop in Enola. The used book store was Cupboard Maker Books. I think I remember visiting this book store on one of my previous trips to Harrisburg. I looked for some science fiction books but I could not remember the names of the authors I’m interested in so I have to add them to my shopping list on my smartphone. But I did find a copy of The Heidi Chronicles by Wendy Wasserstein which was on my shopping list. I wasn’t sure if anything was going to make this trip particularly worthwhile so I was pleased to have at least found a book I was looking for. 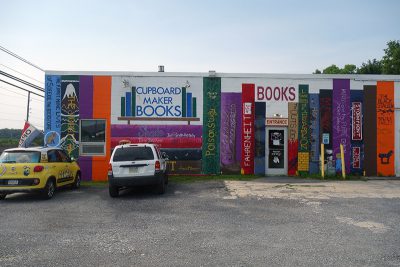 When I reached Gettysburg I took the Baltimore Street exit to go directly to Gettysburg National Military Park instead of going through town. I parked in Parking Lot 3 as recommended by a digital sign which told visitors which lot to use. Parking Lot 3 was almost full of cars but I beat somebody to a parking spot. I was surprised to find the Gettysburg National Military Park so crowded since it was a cloudy day and not an ideal time to visit the battlefield. Fortunately it was only a short walk to the museum and visitor center.

I bought a combo ticket to the film “A New Birth of Freedom”, the Gettysburg Cyclorama, and the Gettysburg Museum of the Civil War for $12.25 and a Battlefield Bus Tour ticket for $30.00 but my sales receipt shows a total of only $42.00 for some reason. I accidentally dropped my bus tour ticket near the rifle display case while tying my shoe but fortunately I noticed it was missing in the line for the film and managed to retrieve it before anyone picked it up off the floor. Good save! I only had time to see the film and the cyclorama before it was time for the bus tour. Actually I had a half hour to kill before the bus tour. It was not enough time to go through the museum so I went to the book store to see what sort of books they had for sale. I located a few books I might want to buy but I didn’t buy anything then because I didn’t want to be carrying anything around the battlefield. 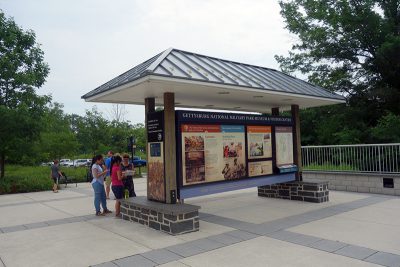 I almost missed the bus tour because I was waiting outside the book store. That is where the buses drop you back off. There is a bus shelter in Parking Lot 2 where the buses depart from, not far from the main entrance kiosk slash message board. I think the Battlefield Bus Tour does not have a set route. What you will see is determined by the professional battlefield guide. Our guide was a Gettysburg former history teacher so she really knew her stuff. She took us to McPherson Ridge where the battle began, the Virginia Memorial with a huge equestrian monument to General Robert E. Lee, Little Round Top where it began to rain a bit, and the Peach Orchard where she talked about General Sickles. We did not leave the bus for photo taking opportunities at every stop; only at McPherson Ridge, the Virginia Monument, and Little Round Top. I was disappointed that we only drove by the Pennsylvania State Memorial and The Angle but I noted how close those sites were to the Soldiers’ National Cemetery parking lot.

After being dropped off outside the Gettysburg National Military Park book store I went back inside to see the Gettysburg Museum of the Civil War. I had a little trouble finding my ticket but nobody was checking for tickets anyway. I saw many display cases of Civil War artifacts but I did not bother to watch most of the videos. The museum was ridiculously crowded. It took me almost an hour to get through the museum. After that I went back to the book store and bought the book The Civil War by Bruce Catton. This is a single volume general history of the entire Civil War. I figured this was a good book to read next because I’m still vague on the causes for the war and how it continued after the Battle of Gettysburg.

I left the Gettysburg National Military Park visitor center and museum around 4:00 p.m. which left me two hours to possibly drive around the battlefield. I was particularly interested in seeing the Pennsylvania State Memorial and The Angle and had a good idea where to find them after the Battlefield Bus Tour. However many of the battlefield roads are one way so it proved to be a little tricky to get there. I think I drove up Taneytown Road from the visitor center and drove through the Soldiers’ National Cemetery parking lot expecting to turn left onto Hancock Avenue. But Hancock Avenue is one way and you can’t go down that way. So I had to drive down Steinwehr Avenue which becomes Emmitsburg Road to United States Avenue. Then I made to mistake of taking Sickles Avenue which only led me back to Emmitsburg Road. I made a left onto United States Avenue again and went further to Hancock Avenue. I did see a large group of Confederate soldier re-enactors along United States Avenue. By driving north on Hancock Avenue I was finally able to reach the Pennsylvania State Memorial, one of the largest monuments on the battlefield. There is an observation deck in this monument but you need to climb a narrow flight of curving stairs to reach it. There was barely enough space for someone going up to pass another person going down. There were a lot of people there so I had to squeeze past several people before reaching the observation deck. After seeing the Pennsylvania State Memorial I proceeded to The Angle which is the furthest point that Pickett’s Charge reached, aka the High Water Mark. This is where Brigadier General Lewis Armistead fell in battle. Lewis Armistead was played by Richard Jordan in the 1993 film Gettysburg. He was one of my favorite characters. I took some photos of the monument which marks where he was mortally wounded. 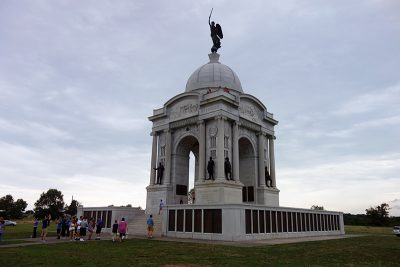 I did not attempt to explore more of the battlefield because it was getting late. You aren’t supposed to be on the battlefield after 6:00 p.m. and it was 5:00 p.m. by then. Clearly I need to study the maps and roads before my next trip on August 5th and 6th. I still want to see Little Round Top, the Devil’s Den, and maybe the Virginia Memorial in better light. 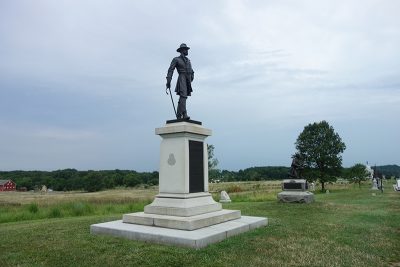 I drove to the end of Hancock Avenue and turned right to park in the Soldiers’ National Cemetery parking lot. This parking lot is far from downtown Gettysburg but it is convenient for free parking if you don’t mind walking. I walked down Taneytown Road to Steinwehr Avenue looking for a place to eat. I was thinking maybe O’Rorke’s Family Eatery but then I saw Gettysburg Eddie’s on Steinwehr Avenue and decided to give that restaurant a try even though it was not in my notes. This proved to be a good choice. Their food was excellent and reasonably priced. The portions were unexpectedly large so you definitely don’t want to order too much. I had the Supreme Nachos and the Deep Dish Apple Crisp. The Supreme Nachos was a huge pile of taco meat, lettuce, tomatoes, and peppers on nachos. It was too much for me to finish even though I was famished. The Deep Dish Apple Crisp came in a huge glass and could have been a meal in itself. But the entire meal cost me less than $25.00. I saw a group of Civil War re-enactors at this restaurant. There were several men dressed as Union generals and one women wearing a dress with a huge hoop skirt. Their costumes were very high quality and looked totally authentic. I like to joke that these people are just more tourists, time travelers. After that heavy meal I went to the souvenir shop next door and bought a Union kepi hat for $20.00.

I then walked all the way to Lincoln Square in downtown Gettysburg and entered the Gallery 30 store on York Street. I was tempted to buy another book but I figured I had spent enough this day. I am also buying more books that I could ever read. On the way back to the car I had to enter the Soldier’s National Cemetery to use the restroom because that heavy meal was running right though me. As long as I was there, I took the opportunity to photograph all the monuments in Soldier’s National Cemetery in the dying sunlight. In particular I saw the Soldiers National Monument gleaming white in the slanting rays of the setting sun.

Instead of driving though town, I went down Taneytown Road until I was able to get on Route 15 North. I stopped off at the Sheetz in Duncannon to fill up on gas but mostly just to get a receipt that showed where it was located. There was supposed to be a thunderstorm that day but it really didn’t rain much until late in the evening as I was a driving home and even that wasn’t much of a storm. But I did not get home until 9:40 p.m. Still, I was pleased that I managed to spend as much time in Gettysburg as possible on a day trip. On my overnight trip in two weeks I will now have more time to drive around the battlefield. I will also have more time to check out the retail establishments and minor museums.