Yesterday I made a day trip to another city in Pennsylvania, Altoona. Altoona is most famous as a railroad town. But is also has a connection with Williamsport as being the birthplace of the science fiction writer H. Beam Piper who eventually moved to Williamsport. Although Altoona is only a two hour drive from Williamsport, I have never visited this city before because I have concentrated more on exploring the eastern half of the state.

I recently bought a dashcam to get some video of the road signs but I didn’t actually record any video because I didn’t study how to use it. I was hoping to get some screen captures to update my driving direction notes. Fortunately I didn’t have too much trouble finding my way around on this trip. I did drive past State College and appreciated the scenic views of the Bald Eagle Valley at the foot of the Bald Eagle Mountain ridge.

I arrived in Altoona at 9:00 a.m., the opening time for the Railroaders Memorial Museum. I saw a short film on the Horseshoe Curve and then saw the exhibits on all three floors of the museum. I also went outside to see the Harry Bennett Memorial Roundhouse. It started to rain then but fortunately it was just a few sprinkles. I found the exit to the walkway around the turntable and bridge. There were many railroad cars in the rolling stock area, some of them badly deteriorating. The Railroaders Memorial Museum reminded me of Steamtown in Scranton. I spent almost an hour and a half at the museum and then drove out to the Horseshoe Curve. I followed the directions on a sheet of paper the museum provides instead of my own directions. The directions were a little complicated but there were some small signs pointing in the right direction at key intersections. It took me approximately 15 minutes to drive out to the Horseshoe Curve. There was some road work going on which reduced traffic to one lane.

Horseshoe Curve was awesome! It was definitely the highlight of my trip. The trackside observation park affords a great view of the valley and mountains. I thought it was very scenic and you would almost want to visit the park just for the view. But the main attraction is the freight trains which go around the curve. There seems to be a train every half hour so you might have a bit of a wait. I should have brought a book along to read. There was a locomotive parked alongside the tracks in its own little fenced in piece of railroad track. I stayed at the Horseshoe Curve for about an hour and only saw two trains; two attached locomotives running alone and a long freight train. You can take the funicular or the steps up to the observation park from the visitor center. I took the funicular to get up there but I took the steps to get back down. The visitor center has a gift shop and a small exhibit area. I did notice one tour bus drop off a load of tourists so some bus companies must include the Horseshoe Curve on their trips. 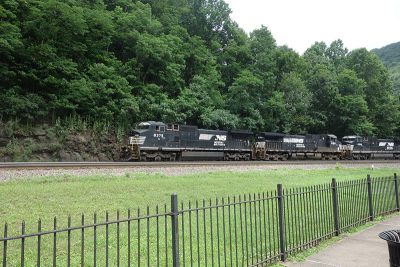 After leaving the Horseshoe Curve I drove back to downtown Altoona but it was a little difficult to find my way. I wasn’t quite sure where to park without getting towed but eventually I parked near the foot bridge across the Pennsylvania Railroad tracks that run south of the downtown area. I left my Railroaders Memorial Museum guidebook visible on my dashboard to make it clear that I was a tourist. While walking across the foot bridge I managed to take a few photos of trains going through the city. Apparently these railroad tracks still get a lot of traffic. 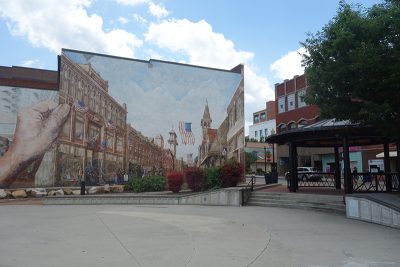 I wandered around downtown Altoona taking photos of everything in sight because this city is poorly documented in photos on the Internet. The downtown did show signs of economic distress with many boarded up storefronts and empty lots. There was not much retail and few restaurants. It was also fairly deserted, like a ghost town. But I took photos of many landmarks like the Cathedral of the Blessed Sacrament, the Mishler Theatre, the Altoona Community Theatre building next to Tom and Joe’s Diner, and the Texas Hot Dogs restaurant which was closed because the owners were on vacation.

Eventually I walked up 12th Street to 16th Avenue, an steep uphill climb. It started to rain as I was climbing the hill and I got slightly drenched but fortunately it did not last long. I forgot to bring my umbrella. After reaching 16th Avenue I walked downhill on 16th Avenue to reach Fairview Cemetery behind the UPMC Altoona hospital. I guess it is kind of convenient having a cemetery right behind a hospital for the patients who don’t make it. Fairview Cemetery is where the science fiction writer H. Beam Piper is buried. Fortunately I did not have to search the entire cemetery for his tombstone because I found a clue to its exact location online and you can even see it using Google Street View. It is in the front of the cemetery closer to the intersection of Willow Avenue and 5th Street, so basically on the far right corner of the cemetery facing the hospital. The Fairview Cemetery was a bit creepy even in the bright sunshine and seemed a bit neglected. The grass was not cut and H. Beam Piper’s tombstone was obscured by wild flowers. I had to tramp then down a little to take photos. Somebody had placed one of his Ace SciFi paperback books beside his tombstone. It was missing its cover and was soggy and deteriorating. I thought it was a fitting symbol of what time does to an author’s work. I have only read one of his novels, The Cosmic Computer, and quite frankly I did not care for it. It seemed very dated and focused too much on mundane world building based closely on the contemporary economic and political systems. I was amused by the term “computerman” as a variation of “spaceman”. The author also predicted a computer which achieves artificial intelligence would still be using punched tape as its output. Well technically H. Beam Piper’s grave was visited by a computerman from the future, the year 2017, since I work as a computer programmer. 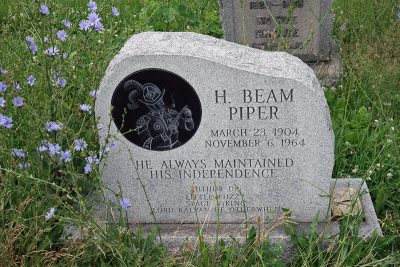 I took some photos of the UPMC Altoona hospital after walking down 4th Street back to Chestnut Avenue. I had lunch at Dickey’s Barbeque Pit. I thought this was a local restaurant but it is actually part of a national chain based in Dallas Texas. I think there was some confusion over what I was ordering because I only got a Just the Pork sandwich and a Big Yellow Cup when I thought I ordered the Classic Sandwich Plate. Fortunately they had some sandwich fixings so I could add special sauce, onions, and pickles to my sandwich. I used the restroom before I left because the sandwich was very greasy.

After finding 11th Avenue I stopped in at the Southern Alleghenies Museum of Art where I saw three exhibits; Kim Williams: View to the Soul, Tim Boyles: Celebrity Status, and William H. Rau: Openings – Urban, Rural, Rail. It was mostly celebrity photos and old railroad photos. According to Wikipedia, William Herman Rau was an American photographer best known for his panoramic photographs of sites along the Pennsylvania Railroad. These photos were in a darkened gallery whose lights only went on if you entered the galley, possibly a novel way to cut down on light damage. 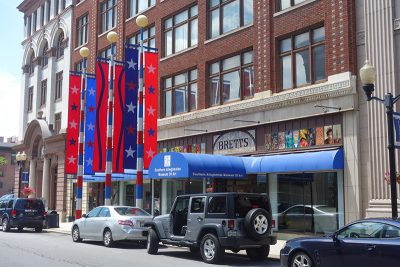 Upon leaving the art museum I wandered around downtown which was mostly deserted. There were some signs of attempted urban renewal along with indications of urban decay. I saw a fancy Veterns Mall and a great mural of the city’s heyday as a major railroad city. I might have wandered a bit further but the sky had darkened and there was a clear threat of a thunderstorm. I did get some final photos of the Cathedral of the Blessed Sacrament which was brilliantly light by the sun against a background of dark clouds. I got at least one great shot before scurrying to my car to beat the rain. 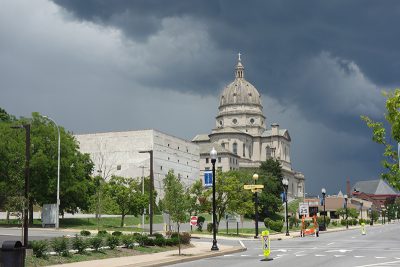 Cathedral of the Blessed Sacrament

Before heading home I did drive to the Logan Town Centre shopping plaza to visit Barnes & Noble. This is practically the only book store in the entire Altoona metropolitan area. I had to wait until a heavy downpour from the thunderstorm had passed before going inside. I bought the book The Children of Odin: Nordic Gods and Heroes by Padraic Colum because I’m not very familiar with Scandanavian mythology.

There does not appear to be enough attractions in the Altoona area to justify another visit but I should probably return to State College after doing more research.