Review of Sweat by Lynn Nottage

On Saturday, June 24, 2017 I saw the Broadway production of Sweat by Lynn Nottage at Studio 54. Although Studio 54 was an infamous disco nightclub in the late 1970s, it is now a Broadway theater managed by the Roundabout Theatre Company. 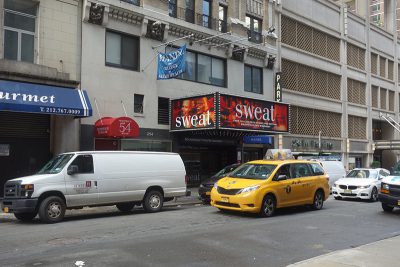 Sweat is most significant play I have ever seen. It is the only play which directly addresses the most important concern of my life, which has been finding decent employment. The play was set in Reading PA, a rust belt city in Pennsylvania which is probably very similar to Williamsport PA. I’ve never been to Reading PA but it is on my list of cities in the state that I plan to visit. Reading PA has a bad reputation for being one of the worst cities in the state. Apparently the city has such a terrible reputation that it attracted the attention of the playwright, Lynn Nottage, who wanted to write a play about industrial decline and its effects upon the working class. Reading PA is just one of many cities in Pennsylvania which have been economically distressed for decades.

The play is essentially a documentary on how NAFTA caused the factories to close down as production moved to Mexico. This also occurred in Williamsport and caused my younger brother to lose his factory job. I have personally never worked in a factory. I eventually found a decent job as a computer programmer and web developer.

Sweat is definitely the sort of play I should have written. I’m a bit jealous that somebody else wrote the definitive play on union busting and factory closings, but we should be grateful that such a play exists at all. It will be very interesting to see if any regional theaters choose to do this play now that its Broadway run has ended. Typically we could expect the Suzanne Roberts Theatre in Philadelphia to do this play since they always include last year’s Pulitzer Prize play in their season. I was looking at the list of Pulitzer Prize plays and noticed that it was identical to the performance history of the Suzanne Roberts Theatre. That is one way to play it safe!

However, this play addresses some controversial issues like union busting, racism, and economic inequality. Sweat will put the commitment of Pennsylvania’s regional theaters to their community to the test. In Williamsport it would definitely require some bravery to include this play in a season because there is a lot of hostility towards unions and working class radicalism even though most of the town’s conservatives are mired in hopeless poverty and bitch endlessly about how there are no decent jobs. These people simply aren’t interested in giving any serious thought to the root of their problems.

But technically this play merely holds up a mirror to the working class and tells us that it sucks to be you. This is the problem with the documentary approach to playwriting. I think there are three possible approaches that a political play can take; the documentary approach, the entertainment approach which merely distracts or comforts us, and the visionary approach. The visionary approach is the one I favor because I think stories should suggest solutions to our problems. The only purpose for our imagination is to run through scenarios, to think about how things could change for us, to dream about how things could be better. Ultimately we will not value any story which does not show us how to handle difficult situations. I think this is why stories about overcoming obstacles without cheating are so popular. There has been a considerable amount of research into the psychology of story in narrative and cognitive theory which suggests that this is why we are “wired for story” as Lisa Cron puts it in her book on writing, Wired for Story: The Writer’s Guide to Using Brain Science to Hook Readers from the Very First Sentence. Our brains have evolved to appreciate stories because it allows us to learn from the mistakes and successes of others. Stories actually have significant value for our survival. Certainly an instructive story on how to meet the challenges of a bad economy would have survival value.

Sweat doesn’t give you any useful suggestions about what to do when your factory closes. It does show the effects this has on a community. It drives many people into drug addiction which we can certainly see with the opioid epidemic that has reached a crisis point. And it drives other people into a life of crime although the only crime committed in this play was the beating of a Latino scab. The play did do an excellent job of demonstrating how people from different ethnic backgrounds were being pitted against each other. The Latino community was being excluded from factory work until the bosses used them to replace the more highly paid, long term workers.

Some of the characters seem a little responsible for their own plight. The play does not try to avoid these character flaws. One worker dismisses the idea of returning to school to learn new skills and another admits to not having any imagination. These are people who have seen factories as the only kind of work to get into for their entire lives. When the factories close down they just don’t know what else to do. Information Technology offers high paying jobs in an office environment but many people have trouble seeing themselves doing this kind of work. This is why I think the visionary mindset is key to dealing with fundamental changes to your ecosystem. When your circumstance change significantly you need to change yourself significantly. You need to transcend your tired and worn out patterns of thinking and see yourself doing something radically different. And this is why we need visionary theater to entice us with dreams of a better outcome.

This entry was posted in General, Theater, Travel, Writing. Bookmark the permalink.