On Tuesday I finally got around to exploring Venice California. My original itinerary called for a trip to Venice on Friday but I was also going to see Weed Shop The Musical on Friday evening and I didn’t want to feel rushed to get back to North Hollywood. Venice is far to the west on the Pacific Ocean coast so it took me two hours just to get there. In Pennsylvania, driving for two hours would put me several towns away from home but in Los Angeles you won’t even have left the city.

I got off the bus at a traffic circle and walked down Windward Avenue to reach the Ocean Front Walk. I saw the Touch of Venice mural and the letters that spell V-E-N-I-C-E across the street. After taking a few photos of the beach I quickly went into Small World Books and bought three books; Open 24 Hours by Suzanne Lummis (a Los Angeles poet), Stage Kiss by Sarah Ruhl (the playwright), and Wild Child by T.C. Boyle (a Southern California novelist). 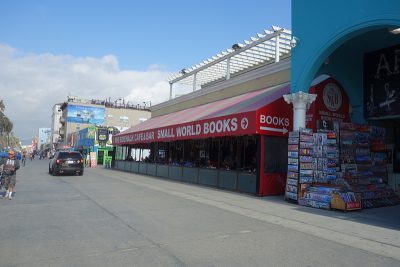 After that I walked along Ocean Front Walk as far as the On the Waterfront Cafe. I walked back along Ocean Front Walk to Its Sugar and then walked up North Venice Boulevard. I walked pass the Abbot Kinney Memorial Branch Library. Eventually I reached my goal and photographed the Beyond Baroque Literary Arts Center, the Social and Public Art Resource Center (SPARC), and the Pacific Resident Theatre where I picked up postcards for Two Henrys: A New Play by Kenneth Jones and A Touch Of The Poet by Eugene O’Neill. I would have liked to have seen A Touch Of The Poet by Eugene O’Neill but it didn’t open until November 5th. I had to fly home that day. 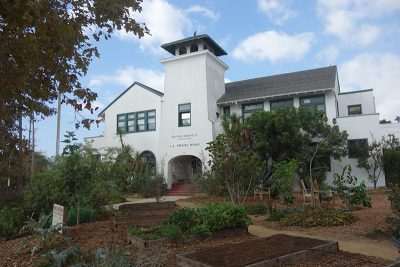 One of the reasons I wanted to visit Venice was its literary association with the Beat writers. I’ve read the book Venice West by John Arthur Maynard which explains how much of the beatnik mythos developed in Venice California. Unfortunately all trace of the Beat poets has been erased except for the Venice Beach Poets Monument which is a few quotes by historic Venice Beat Poets on a public restroom wall.

I then walked back to Abbot Kinney Boulevard and quickly found Mystic Journey Bookstore where I bought The Shaman & Ayahuasca by Don Jose Campos. This was a significant purchase given my interest in visionary art and shamanism. 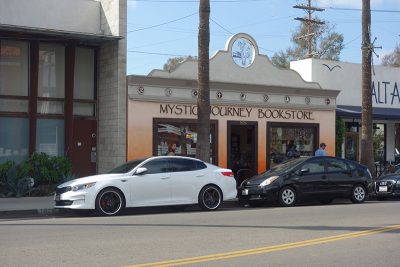 I went to Lemonade for lunch because I could see that they had restrooms for customers and I desperately needed one after that long bus ride. The greeter had to explain how to place an order since it was a complicated process. Basically I took a tray and pointed to dishes that I wanted. Each portion cost $2.75 and consisted of an exotic fusion of vegetables and maybe meat. I had something with yellow cauliflowers and grapes, string beans and pineapple chicken, and something that looked like Kiwi slices covered in pepper with beef cubes. I also had watermelon rosemary lemonade. This meal only cost me $12.26 which was quite reasonable. After placing my tray on a table I immediately headed for the restroom.

After lunch I walked the length of Abbot Kinney Boulevard and took as many photos as possible even though I had not fully researched the establishments along this street. Venice is incorporated into Los Angeles but it is a city in its own right and I did not have time to research multiple cities for my trip.

I then walked east and eventually found the canals by following Dell Avenue. I crossed all four bridges and took plenty of photos of the canals. I saw a few other tourists and many cars went by on the one way street forcing me to the side of the road. 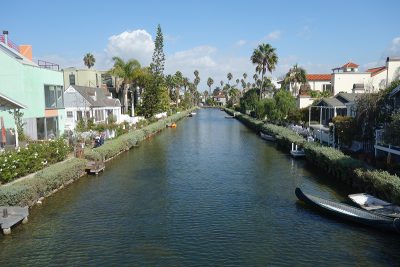 After that I took another stroll along the Ocean Front Walk. Many more stores were now open and the boardwalk was a bit more crowded but I did not see a single girl in a bikini. I did see a lot of homeless people and many of them were street vendors. There were also many young black men trying to give people their CDs which is a well known scam.

Eventually I got tired of walking in the hot sun so I took the Metro Rapid Line 733 to Downtown LA but instead of going all the way to Union Station I got off at 7th Street and walked west to the 7th Street Metro Center. I took the Metro Red Line to the North Hollywood Station. 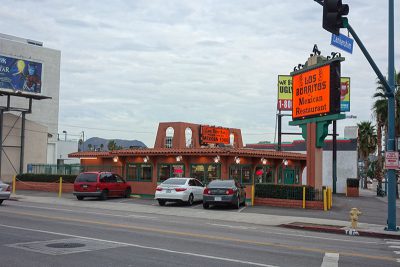 Back in North Hollywood I continued my efforts to have dinner at local restaurants. I stopped in at Los Burritos and ordered the carne asada plate. In Latin America, carne asada is specifically beef, usually skirt steak, flank steak or flap steak, grilled and served as slices. It is usually cooked with a certain amount of searing to impart a charred flavor. Carne asada can be served as a main dish or as an ingredient in other dishes. I ordered it to go. This plate also came with three corn meal tortillas, mushed bean mole, a small salad, flavored rice with a small amount of carrots, and two small containers of sauce or salsa. Los Burritos was right next to my hotel so it was convenient but I don’t care for Mexican food so I only tried them once.