My final three days in Los Angeles were devoted to studio tours. On Wednesday I had a tour reservation for the Paramount Studios Tour. Paramount Studios is the only film studio still located in Hollywood. So I took the Metro Red Line to the Hollywood / Vine Station. According to my directions, the south west corner of Hollywood Boulevard and Argyle Avenue would be the benches alongside the W Hollywood Hotel. The bus sign there read discharge only so I decided to walk to Melrose Avenue. I proceeded to walk down Argyle Avenue. When I reached Sunset Boulevard I walked pass the Hollywood Palladium Theater so I took photos of that and then noticed El Centro Avenue. Since the Circle Theater is on El Centro Avenue I decided to walk down that to find it. El Centro Theatre still appears to be under renovation and I think I attracted somebody’s attention by taking photos of the place.

I arrived way too early at Melrose Avenue, around 9:00 a.m., so I walked along Melrose Avenue to Raleigh Studios. I then walked to the Coffee + Food coffee shop and ordered an iced latte and a muffin with egg, bacon, and avcado. I spent a lot of time chewing the ice from the iced latte (it was mostly ice) while starring at an Olivetti typewriter. After that I walked even further west on Melrose Avenue pass Vine Street and then headed south on North Arden Boulevard pass the Christ the King Roman Catholic Church and saw the Ravenwood Aparments building and the El Royale Apartments building which caught my eye.

I noticed a Stephanie Feury Studio Theatre above the Coffee + Food coffee shop while walking back to Paramount Studios. I waited on a bus stop bench until exactly 10:30 a.m. and then went to the Paramount Studios Tour entrance. I had to go though a metal detector and have my shoulder bag inspected right at the door upon entering. I forgot to take my camera out of my pants pocket. I saw a group of well dressed people in the tour waiting area but some of them appeared to be Asians. There was a restroom in the waiting area which I had to use. The waiting area had some costumes on display and a wall of photographs. Eventually my tour guide, Cody Dobie, introduced himself and it turned out that I was the only person to show up for the 11:00 a.m. tour. A family was supposed to be part of the tour but they did not show up. Later the tour guide found his walkie talkie was turned to the wrong station which may be why they did not hook up with us. But as it turned out I got a personal tour which made me feel quite special. He gave me an audio device so I could hear him clearly over any background noise. Cody mentioned that he was also the program coordinator at the W Hollywood Hotel. 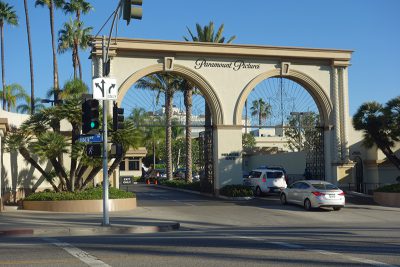 Since I cut my cable TV years ago I was way behind on contemporary television shows which really left me clueless about many of the shows and productions being filmed on the Paramount Studios lots. We went into a storage area with some neat props including lots of science fiction movie props. We entered the sound stage where they film the TV show Grace and Frankie starring Lily Tomlin. That was a fascinating glimpse into the production work space with computer stations, green screens, and the framework of a house like a hardware store mock up of drywalls and wall frames. There was no ceiling because that is where the lights are placed and the film cameras are lowered. There was a fake beach in the back yard. I had to leave my camera on the floor of an office because it was not allowed on the set. When we got back my camera was missing! Fortunately somebody had found it and was going to leave a note. My camera was returned to me. 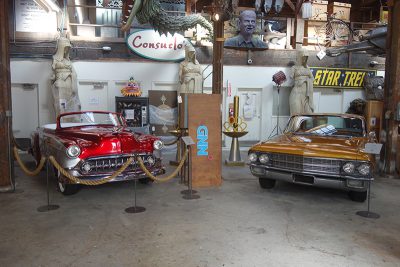 I got so see the stage set for Dr. Phil and was told where his wife sits and what is special about her chair and her extra requirements.

I saw one celebrity in a pink robe, but I was not familiar with her. Best guess it was Emma Roberts, related to Julia Roberts, currently starring in the TV show “Scream Queens”. This was near the parking lot they can flood for filming water scenes.

Other things I saw; the Hollywood sign from the studio lot, Lucille Ball’s office and her park, the New York City facades and the trees they rent for $500 ,the Forest Gump bench and the Paramount Theatre. Cody used an iPad to play scenes from movies filmed on the lot. We got around on a golf cart. He mentioned that the biopic Hitchcock was filmed at Paramount Studios so I bought the DVD of that film when I got home. The tour lasted two hours.

Although I can be a bit of a snob, I like movies as much as the next person so touring a Hollywood studio was a big thrill and made the business seem more real to me. Movies are the collective dreams of our culture. I’ve often given thought to the enormous significance they hold for millions of people.

After the tour was over I walked up Vine Street back to the Metro Red Line station. Along the way I photographed the Pickford Center for Motion Picture Study and Ricardo Montalban Theatre again. I took the Metro Red Line to the Vermont / Sunset Station because earlier in my trip I had noticed that this subway station puts you close to the Dresden restaurant, Skylight Books, and the Soap Plant / Wacko store and gallery. I wanted to take photos of all these establishments. 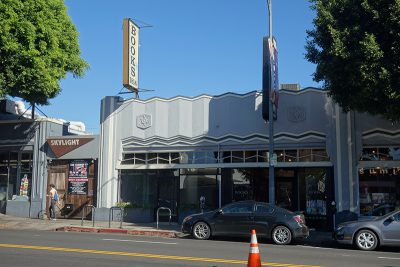 At Skylight Books I bought three plays; Enron by Lucy Prebble, Radio Gulf by August Wilson, and The Lyons by Nicky Silver. At Soap Plant / Wacko I bought Mexican Graphics by Antoni Cadafalch. This was an expensive book, $44.95, $49.00 total. I was very pleased with this purchase since it appears to feature the artwork of contemporary Latino graphic artists which I found inspiring after a brief exposure to it at Olvera Street. I was hoping to find a good book on that style of art and I did! I also found a Rozz Williams Christian Death postcard advertising a book. I have a lot of Rozz Williams CDs which I’ve owned for a long time. He was part of the California Deathrock subculture which I used to be into, but had forgotten. I probably should have explored that angle for my trip. 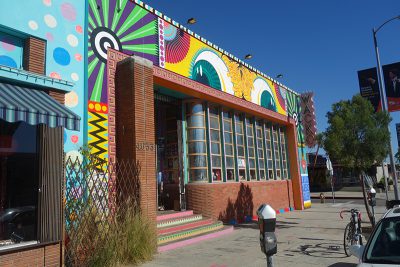 After returning to the hotel, I had dinner at Denny’s across the street. I ordered a Chocolate Peanut Butter Shake and Grilled Cheese with Chicken Noodle Soup. Service was a bit slow but the food was good.

After returning to the hotel, I walked down Lankershim Boulevard to Odyssey Video where I bought some videos. Then I went to Blastoff Comics where I bought an old science fiction novel, The Asylum World by John Jakes. I like this sort of random encounter with culture that often occurs during my travels. It is very inspiring and gives me hope that my trip will lead to some significant new influence.