I began my final week in Los Angeles on a mission to visit the Miracle Mile where several more museums are located. I took the Metro Red Line to the Hollywood / Vine Station. I think I saw the mayor of Los Angeles standing in front of the North Hollywood Metro Station, in-between the escalators, giving a news conference on Measure M. On the train, there was a sheriff checking TAP cards and he caught a few miscreants with invalid cards.

At the Hollywood / Vine Station I wanted the Metro Local Line 217 but I wasn’t sure where the bus stop was located. It was located where there are benches near the Deja Vu Showgirls strip club. I took the Metro Local Line 217 bus to Wilshire Boulevard. This was several blocks south of Hollywood Boulevard and too far to walk. I arrived at Wilshire Boulevard near the Petersen Automotive Museum. There was a lot of street construction in the area. They were working to extend the Purple Line.

I walked pass the Los Angeles County Museum of Art to the La Brea Tar Pits and arrived shortly after it opened at 9:30 a.m. so I was in time for the 10:00 a.m. showing of the Titans of the Ice Age short film at the 3D Theater. When the movie was over I used the restroom. I then examined all the exhibits and took lots of photos of Ice Age animal skeletons. I even walked through the Atrium. I then walked around outside and saw several of the tar pits. The tar pits really do smell like asphalt. 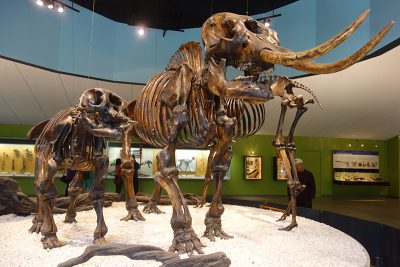 I entered the Los Angeles County Museum of Art shortly after they opened and found my way through the Ahmanson Building to the BP Grand Entrance where the ticket booths were located. I paid $25.00 for General Admission and Special Exhibits which only got me a ticket for the Guillermo del Toro special exhibit for Halloween. 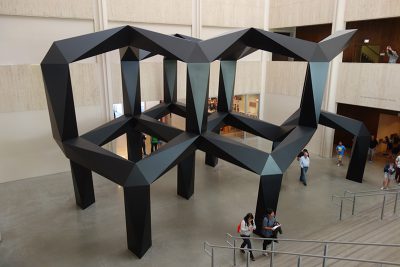 I took hundreds of photos of the artwork. Nobody said anything to me about it not being permitted. Eventually I stopped at the Coffee & Milk cafe and had an almond croissant and a honey latte. I had to ask directions for the Guillermo del Toro: At Home with Monsters exhibit. This exhibit was a geek’s delight and even featured wax figures of Lovecraft and Poe. There were lots of movie props, weird artwork, old comic books, and video compilations of clips from Guillermo del Toro’s movies. Although I wasn’t terribly familiar with the the name, I have seen many Guillermo del Toro films including Pan’s Labyrinth, Hellboy, Mimic and Pacific Rim. But he has done many other films which I have not seen. I saw an amusing film clip of a Mexican wrestler fighting vampires. This was The Silver Angel from the series The Strain, a television series based on a Guillermo del Toro novel. At the gift shop I bought a Guillermo del Toro Trilogy boxed set of DVDs which cost an astounding $108.95. It includes the films; Cronos, The Devil’s Backbone, and Pan’s Labyrinth. 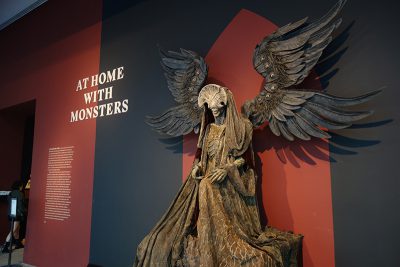 In the Broad Contemporary Art Museum, not to be confused with The Broad Museum downtown, I saw the huge sculpture, Chris Burden’s Metropolis II. This was a huge model of a city made from what looked like erector sets. You could walk up some stairs to a balcony to look at it from above.

I went to the Pavilion for Japanese Art which has a spiral ramp and saw Japanese Painting: From the Zen Mind and Awazu Kiyoshi, Graphic Design: Summoning the Outdated. I also saw their collection of netsuke, which are small carvings used to secure the cord at the top of the kimono sash.

I saw some black people filming a black fashion model in the sculpture garden as I was leaving. I rarely encounter fashion model shoots in New York City but I think I saw two in Los Angeles.

After leaving the museums I walked up Wilshire Boulevard and photographed the SAG-AFTRA building and the El Rey Theatre. I also happened to photograph the CBS Radio skyscraper and the Craft and Folk Art Museum, which was closed, and the Petersen Automotive Museum. 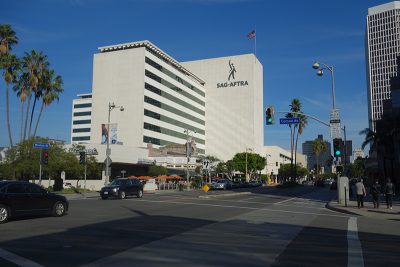 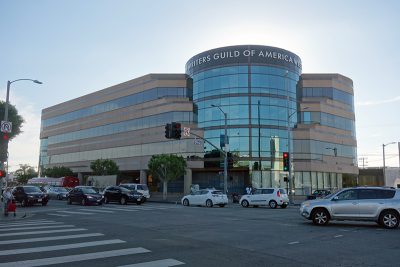 I got back to Hollywood Boulevard by taking the Metro Local Line 217 bus. I walked west to see the WeWork buidling and the Hollywood Gateway Sculpture. Then I walked all along the length of Hollywood Boulevard taking better photos with the sun striking one side of the street at an angle, illuminating buildings. I found a KNBC 4 News van outside the Cahuenga Video Adult Books Store which prevented me from going in there!

There seemed to be heavy security outside the Hollywood / Vine Station. When I got back to North Hollywood Station I went to Vicious Dogs and ordered a Chili Cheese Dog and Onion Rings to go. When I got back to the hotel I discovered I got French Fries instead of the Onion Rings but I did not mind. That was my second visit to a neighborhood restaurant for dinner. I didn’t want to end my trip without having checked out the restaurants in North Hollywood where I had expected I would eat.