My flight from Williamsport was canceled on Saturday, after we had gone through security and were seated on the plane, maintenance warning required an abort of takeoff, so I had to come back to the airport on Sunday. This means I lost a day from my vacation. In the future it may be better to drive down to Philadelphia International Airport and fly from there.

I was seated on the aisle on the plane that left Williamsport but there was nobody in the window seat so I moved and got a good aerial view of the Lycoming Mall and the Berwick Nuclear Power Plant. At the Philadelphia International Airport I took a bus shuttle all the way from the F terminal to the A terminal. I like to joke that you need to take a plane to get from one end of that airport to another because it is huge. Being in the Philadelphia International Airport was interesting because I’ve been doing lots of travel preparation for future Philly trips. I saw the SEPTA train that shuttles passengers from downtown Philly to the airport.

During the 6 hour flight to Frankfurt Airport I watched three movies on the inflight entertainment system; The Tourist (how appropriate), Mr. And Mrs. Smith (also starring Angelina Jolie), and most of Red. I had a long layover in Frankfurt before a Lufthansa flight to Berlin’s Tegel Airport. I had to go through passport control and then security again to get to terminal A, but at least they don’t make you remove your shoes. During the long wait I found an ATM (Geldautomat) and used my debit card to withdraw 200 euros. There were free newspapers in the waiting areas so I used the opportunity to stash some German newspapers which you cannot obtain in the United States. The biggest news story was Guido Westerwelle’s decision not to run for re-election as FDP leadership. I had to learn a little about German politics to study the nation’s culture because the German news covers it a lot. I found a bookstore and bought a Berlin map (better than the one I brought), a small Berlin guide book (Polyglott on tour brand), and a copy of Tip Berlin magazine, a magazine I was unable to obtain at home.

During the hour flight on Lufthansa, announcements were made in German first and then in English, the opposite from the US flight. I was handed a Corny Free candy bar as I boarded the plane. This is an amusing example of the bizarre use of English in German products to seem fashionable. Is “corny” an adjective meaning the candy bar will not be corny? Television shows can be corny, but not candy bars. Or does it mean you can be assured that this candy bar will not contain corn? You certainly would not expect corn in your candy bar.

I had a window seat on the Lufthansa plane but did not see anything interesting out the window as we made our descent to Berlin except for lots of apartment blocks. After landing and collecting my bag, my biggest challenge was finding a taxi to the hotel. This is a fine example of those travel details which are simple enough, but require some experience because nobody ever explains how it is done. And it is hard to figure out when you are barely functioning due to jetlag. Finding the exit was easy enough, but once outside there was a line of taxis queuing up for a position in two taxi lines. Just waiting on the sidewalk was not doing me any good because this seems to be where cars will pick people up. After observing the scene for awhile, I carefully crossed over to the the taxi line, which is sort of a traffic island, and moved forward until a taxi driver beckoned me over to him. I just handed him a piece of paper with my hotel address printed on it in big letters. That was one bit of business I came well prepared for!

As we drove around Berlin, I observed all the signs and little details. Before this trip, I had a prescient dream of wandering a Berlin neighborhood which made a peculiar impression. I was amazed to receive the same impression at one point in this drive. It is highly unusual for a dream to accurately portray someplace you’ve never been before. In my experience, dreams are incapable of presenting anything that is not a distortion based on actual experiences. Of course, my dream did not show me exactly what something looked like in Berlin, it was more like a matching impression. Still kind of amazing because after seeing countless photos in Berlin, everything looks quite different in real life and makes a very different impression from what you expect based on photographs. 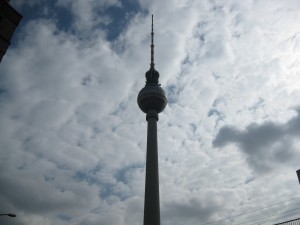 Now where was I? The taxi driver seemed to be driving all around Berlin but eventually we drew closer to the television tower and I recognized streets from Google Street Maps. I was worried that my hotel would give me some grief because I did not show up yesterday but they received my email and everything was cool. My credit card was rejected though because I forgot to notify them that I would be in Berlin. Fortunately, I have two credit cards. You should definitely hang on to your credit cards, even though they jack up the rates, because I don’t think it is as easy to get another card as it used to be.

I’m staying at a designer hotel which is truly a designer hotel, in the sense that it seems like something Apple would design. There is one big button for the lights and nothing works as you would expect due to the clever design. In the Information Technology business, designing something this way in complete disregard for usability would deserve a lengthy rant.

After freshening up I went out for some sightseeing. It was only my intention to take some photos of the television tower but I keep going until I had walked all the way to the Brandenburg Gate and snapped photos of almost every sight in Berlin. I even ventured past that into the Tiergarten and found the Soviet Memorial. Mitte seems compact enough to walk if you have good shoes. That reminds me that TSA security in the United States will no longer allow you to have gel inserts in your shoes. So I put a pack in my checked bag but forgot they needed to be cut to size. Since you cannot pack scissors this presented a problem. I had to cut them to size with a kitchen knife.

My research on Berlin really paid off because I knew exactly what to look for to find all the landmarks. The only landmark I had trouble finding was the Marx-Engels Forum statues of Karl Marx and Friedrich Engles which has been moved and enclosed in a chain-linked fence. I get the impression that Karl Marx isn’t getting too much respect in Berlin these days. However, there is still a lot of construction going on. 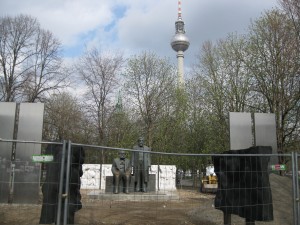 Unfortunately, the Reichstag Dome was closed to visitors. I don’t know if that was just for today or if it will be closed indefinitely for security’s sake. I remember reading that it may be closed after Germany received some threats. I did take many photographs of the building. 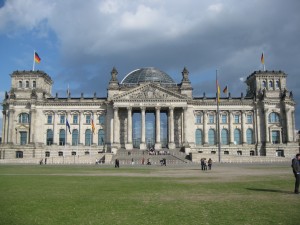 I’m not having much luck with my German. I don’t think my pronunciation is anywhere near good enough. It certainly is useful to be able to read a little German though. Fortunately, Germany really is a bilingual country with English being the preferred secondary language. So far I have found everyone capable of switching to English. I’m really impressed! But you do need to indicate your native tongue as soon as possible to provide the right social cue. I have decided to start every interaction with a “Hello” to get us into English mode. You definitely don’t want to remain silent and keep them guessing.