Having explored the Upper East Side the previous day, my goal on the fifth day of my vacation was to explore the Upper West Side. I had rarely ventured into the Upper West Side on previous trips so there were a few things for me to see, mostly around the Columbia University area. I had breakfast at Pret a Manger since that became my routine. I had a cup of coffee, a parfait, a mozzarella and tomato croissant, and a small bottle of orange juice. At 7:37 a.m I went to the nearest Duane Reade and bought 6 inch scissors, a gel heal cup, and foot blister Band-Aids since by that time I had a few blisters. In the end I only suffered from two blisters due to my tight shoes, one my one little toe and one on the back of my heel of the other foot. 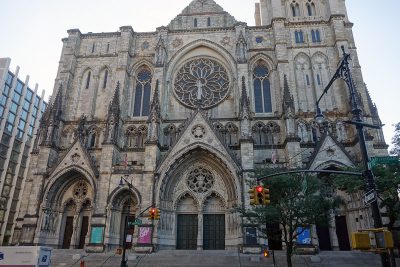 Cathedral of Saint John the Divine

I walked to the 50th Street Station and took the 1 train uptown to the 110st Street Station on the Cathedral Parkway. I photographed the subway exists since this was a station I’ve never used before. I walked to the Cathedral Church of St. John the Divine and photographed the Peace Fountain. I couldn’t really enter any other areas of the garden. I discovered the cathedral does not open until 9:00 a.m. even though they put out the Enter Here sign. Not being able to visit the cathedral, I walked up Amsterdam Avenue to Columbia University. I took photos of the Low Memorial Library, the Alma Mater Statue, the Butler Library, and the Miller Theatre but I didn’t actually attempt to enter any building or explore the campus. Once again, I got the impression that foreign dignitaries were being entertained at the college so it may not have been wise to poke about. From there I quickly found the entrance to Barnard College. I saw a curious wooden duck sculpture in the crosswalk leading to the college but I didn’t even cross the street. I circled around to the block to take photos of St. Paul’s Chapel. There were actually a lot of grand buildings in the neighborhood which I could not identify. Visiting Columbia University was kind of extra meaningful since I mentioned the college in my last play. In fact, it occurred to me that this play might do better than I expect since it would be great for high schools to do this play as part of their career counseling. My play could prove to a sweet little money maker! 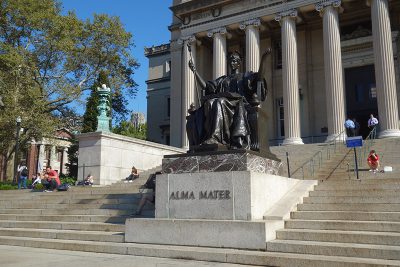 I walked  back down Amsterdam Avenue to the cathedral and found the Book Culture book store which was open. I bought the book What Blest Genius? by Andrew McConnell Scott for $29.34 at 9:22 a.m. This book is about the jubilee that helped to establish William Shakespeare as a literary god. I had heard about this book, and although it was not on my shopping list, it seemed the best book I was likely to find on the drama shelf. I then located and photographed the Nicholas Roerich Museum but it did not open until 12:00 p.m. noon. So I walked back to the Cathedral Church of St. John the Divine where I was finally let in. It only cost $5.00 admission since the cathedral was being renovated and there was not much to see inside. Both times I attempted to walk straight in since most churches will not charge you to enter. The chapel was kind of spooky since it was covered in scaffolding and looked like the backstage of a theater.

I walked back to Columbia University but this time I only saw an additional fountain to photograph. I proceeded to the General Grant National Memorial. I watched a  film in the visitor’s center before crossing the street to enter the tomb. There was not much to see except for two sarcophagi and a few bronze busts of Civil War generals. I then walked south along Riverside Park to 107th Street near the Nicholas Roerich Museum. The museum did not open until 12:00 p.m. noon so I sat on a park bench reading my book, What Blest Genius? 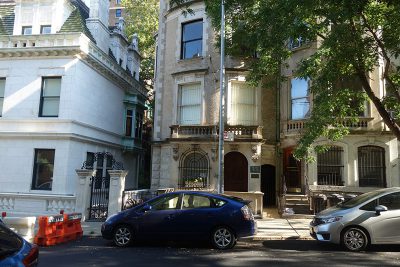 The Nicholas Roerich Museum had two floors of paintings and exhibits and mostly photos along a hallway on the ground floor. I left a $3.00 tip. Nicholas Roerich was a Russian-born artist whose work focused on nature scenes from the Himalayas. H.P. Lovecraft mentions his paintings in his Antarctic horror story At the Mountains of Madness and that is enough to make Roerich part of the mythos. I would not go out of your way to visit the Nicholas Roerich Museum but it is pretty cool if you are in the area. On Saturdays they are only open from 2:00 p.m. to 5:00 p.m. so it would have been difficult to fit this place into one of my day trips.

After seeing the Nicholas Roerich Museum I was done with the Upper West Side so I took the 1 train back downtown to the 50th Street Station. I walked up to 52nd street to photograph some theaters and then up to West 54th Street to photograph Studio 54 again. Then I saw Stephen Colbert filming alongside the Ed Sullivan Theatre. He appeared to be taking a baseball bat to a car windshield with a maybe a guest on his show?? I saw a crowd around them trying to take photos and I managed to take a few myself. That was pretty much the only celebrity I have seen on the street. I went back to my hotel to drop off my book. 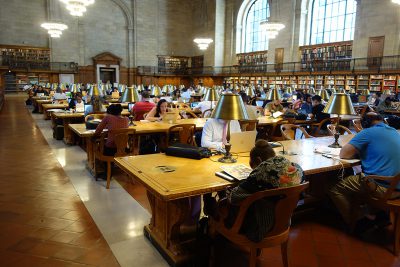 Since my trip to the Upper West Side did not take all day I was able to proceed to do some things on another day’s itinerary again. I walked to Bryant Park and visited the New York Public Library. I made a mental note to add its hours to my notes since that information was missing. At the Stephen A. Schwarzman Building I saw watercolors by travel writer William P. Rayner. He trekked across Southeast Asia, India, the Middle East, and North Africa. I found the Picture Collection room and pulled out a folder to browse through drawings. Most of the drawings appeared to be from pages torn out of magazines. This was kind of interesting but completely random. I wandered through the building and found a few reading rooms but there was not much to see. I also found the library gift shop. Most public libraries do not have a gift shop and I was tempted to buy something but I was already over my quota on books. However, it could be good place to buy commemorative books on my future trips to NYC. 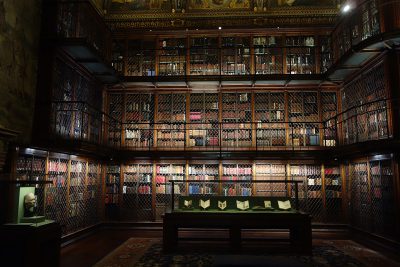 After leaving the library I quickly walked to the Morgan Library & Museum to sneak in a visit before they closed. Both the New York Public Library and the Morgan Library & Museum were on my itinerary for another day so I was getting ahead of schedule. The admission to the Morgan Library & Museum had increased to $22.00. They seemed to be setting up for visiting dignitaries.  I saw metal detectors being set up and when I left there was a lot of security gathered around the entrance which made me nervous. I saw the Morgan office and library and took some great photos. I even saw a page from a William Blake illustrated book, America: A Prophecy. There were a few interesting exhibits on opera; Drawing the Curtain: Maurice Sendak’s Designs for Opera and Ballet and Verdi: Creating Otello and Falstaff—Highlights from the Ricordi Archive. I saw both a First Folio and Second Folio of Shakespeare’s plays bound in leather as part of the Verdi exhibit and that really made my visit worthwhile because I’ve recently read a book about the textual differences in the Shakespeare folios. The museum guard asked me if I understood the writing and then realized that the books were in English. I’m not sure what that was all about. At the gift shop I bought Verdi’s Shakespeare: Men of the Theater by Garry Wills. I am not familiar with any operas based on Shakespeare’s plays so I was curious to know more. Part of the reason to travel and visit museums is to be exposed to new art but to be honest I rarely follow up on what I’ve seen.

I went to the Hourglass Tavern at 6:00 p.m. This was a very cramped restaurant but I was given a table by myself down stairs. I had a prix-fixe dinner of pork chops with mashed potatoes. The meal began with a bowl of chicken soup and ended with tiramisu. I drank several glasses of water because I was thirsty. After this pre-theater meal I saw Linda Vista at the Helen Hayes Theater. This was one of the two straight plays I saw on this trip. Linda Vista was written by the playwright Tracy Letts so I expected it to be a great play. I did not have my ticket delivered to me so I had to go to the box office to get my will call ticket. A line did not form outside the theater because we were allowed to wait in the lobby, but it took me awhile to figure that out. 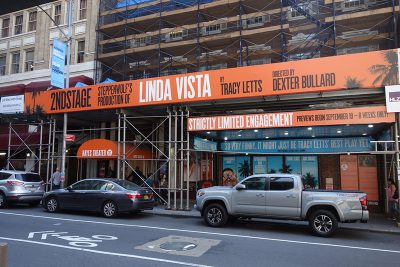 My seat was below the level of the stage so I was looking up at the performers. The play began with Ian Barford carrying in boxes to move into his new apartment. The stage set revolved to reveal a living room with a kitchen area, a bedroom, a camera repair store, a karoke bar, and a restaurant. There was nudity and simulated sex in this show, twice! This seems to be a new trend on Broadway. I don’t really mind it, but I think the audience should be forewarned about simulated sex scenes.  There was some mention of the nudity but the simulated sex was a surprise and I think it is meant to be kept a surprise.

Somebody began grunting really loud during the first act. The management had to threaten to throw this person out. It caused a bit of a stir. Ian Barford managed to work a snide remark about the grunts into one of his lines. Everybody laughed at that. They were watching Stanley Kubrick’s Barry Lyndon on a flat screen TV at one point in the show. This really lent a surprising degree of realism but I have to wonder if they got permission to show that clip. I liked Linda Vista because it was about a guy my age but it did make him out to seem a little pathetic. I don’t like my protagonists to seem like real losers but I often leave them without a job since I end the play with them getting fired. I don’t think Linda Vista has been published yet but I intend to buy a copy of the script.