On the sixth day of my vacation I gave a day to Brooklyn. I probably should have spent more time in Brooklyn since I’ve done Manhattan to death, but I did not have enough time to do extensive research. I had breakfast at Pret a Manger again and got my usual; a cup of coffee, a parfait berry yogurt, a mozzarella and tomato croissant, and a small bottle of orange juice. I went to Duane Reade to use their ATM and withdrew another $80.00 at 7:56 a.m because I had run out of my stash of cash.

I took  the 7 train at Times Square to Court Square Station in Queens and then transferred to the G train. I got off at the Bergen Street Station to explore the Boerum Hill neighborhood although there really isn’t much to see there. I located and photographed the Invisible Dog Art Center even though it was not open. I also located and photographed a Mosaic House which showed up on Google Maps. But I have no idea what the story is behind it. I initially went down the wrong street but I quickly found the right street. I then walked to the Books Are Magic book store in Cobble Hill. I bought the book Anna Ziegler’s Plays One at 10:16 a.m. This book was published by Oberon Books, a UK company, so I thought Anna Ziegler was a British playwright but she is actually an American playwright born in Brooklyn. That may explain why Books Are Magic had this book on their drama shelf. Now that I was in the Cobble Hill neighborhood I photographed the Cobble Hill Cinemas. 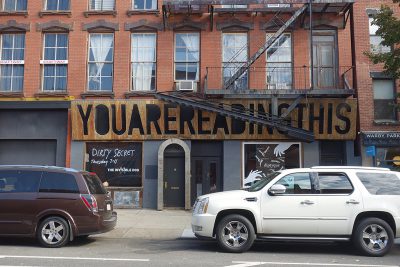 I then walked north on Court Street to reach Atlantic Avenue. I walked many blocks east to reach the Brooklyn Academy of Music cultural district. I did not see Roulette Intermedium but I did locate Fire Lotus Temple which was covered in scaffolding. The Fire Lotus Temple is a Zen temple. I’ve read a few books on Zen Buddhism and have a lot of respect for that religion, but they have nothing to tell us about the visionary aspect of spirituality and mysticism which is better exemplified in shamanism. 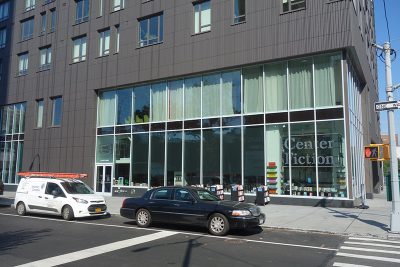 The only place I visited in the BAM cultural district was the Center for Fiction, an organization devoted to fiction writers which had recently moved into a new building. I bought the book In Other Words by Jhumpa Lahiri because I liked the cover which pictures a young woman reading in a library. This is a book about a writer’s struggles to learn Italian and I may have heard about this book when I was studying Italian for my trip to Rome and Venice. I was cheated out of $2.00 in change when I bought this book so I guess the Center for Fiction is totally intent on taking money off of writers. 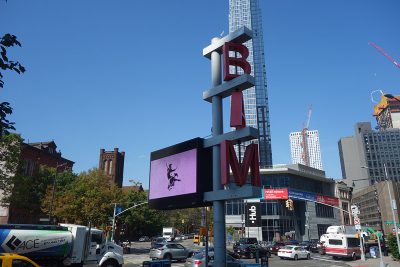 I photographed some of the art institutions in the neighborhood; the Brooklyn Academy of Music, the BAM Tower, the Mark Morris Dance Center, and the Polonsky Shakespeare Center. The only thing new I stumbled across was the MUSE Academy, a private school for early childhood instruction in the creative and performing arts. I found that as I was circling around the Brooklyn Academy of Music to photograph the Apple store at the rear of the BAM Tower, also known as 300 Ashland. Brooklyn now has a lot of residential skyscrapers and is beginning to look like Manhattan.

At the  Barclays Center I took a Q train to 42nd Street Bryant Park. This train did not make the expected stops so I will have to look into that. As usual some subway performers took the opportunity to pester riders as the train was making its long way from Brooklyn to Manhattan. I think they take advantage of the extended time between stops. I dropped off my books at the hotel and had lunch at Pret a Manger. This time I sat outside and for once they gave me a tray. I had a Ham and Swiss baguette, a can of coke and blood orange, and my usual parfait.

I photographed the New Dramatists and Actor’s Studio then walked far west on West 46th Street to the Intrepid Sea, Air, and Space Museum. At 1:48 p.. I bought a ticket with my credit card which came to $33.00. I’ve seen the Intrepid Sea, Air, and Space Museum on a previous trip but that was before they got a space shuttle. I took an elevator to the flight deck and photographed lots of planes. Then I went into the hanger where they keep the space shuttle Enterprise. They insisted on taking my photo as they do at some of the more tacky attractions but I didn’t want to buy any photos of myself. I did take many photos of the space shuttle but it was huge and filled the hanger so you could not get it all into a shot. I think they should have kept it on the flight deck so you could take a photo from a distance. There were a few exhibits on the space shuttle and a physics demonstration designed for kids. After that I went to the control tower, explored the hanger deck with its many exhibits, and saw the crew sleeping quarters. I went back outside to the flight deck and took photos of the Concorde all the way towards the back. At this point it began to look like rain and I did not have my umbrella. But I did take time to tour the USS Growler, a submarine docked beside the USS Intrepid. First I saw many interactive exhibits which I don’t remember from my previous trip. I didn’t waste much time on those but hurried down the missile bay to crawl through the ship. Several people were in front of me but I managed to take photos of almost every room. I remember thinking the sleeping quarters were almost as small as my hotel room. After leaving the submarine I did rush back to my hotel to beat the rain. 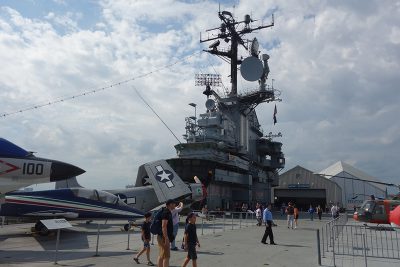 I had dinner at Chik-fil-A because we don’t have that restaurant chain in my area. I ordered a Chick-fil-A’s original chicken sandwich, waffle fries, and a coke. I had to ask for some sauce and they kept me waiting for a good long while before asking me what I wanted. I had my orange umbrella with me because it was starting to rain. I spilled some sauce on my white dress shirt and tried to remove it in my hotel room. 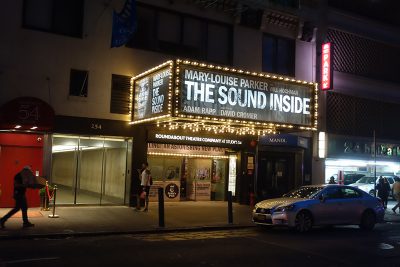 That evening I saw the play “The Sound Inside” by Adam Rapp at Studio 54. This was the second straight play I saw on my trip. This was also the second time I’ve seen a play at Studio 54. We did not form a line outside because you could wait in the lobby. We formed two lines in the lobby under some chandeliers. I had a front row seat for this show. At one point Mary-Loise Parker sat on the stage right in front of me. If she had come any closer it would have been to climb into my lap.

The stage was mostly keep completely dark and black with sets appearing out of the abyss. I liked the tree that appeared like a spectral apparition in the background. Stage sets moved forward or receded magically and the stage lighting picked out the actors in the darkness. The play was about fiction writers or novelists, and mentioned Dostoevsky often. It sort of had a surprise ending because I was guessing that the student was just a character the lonely professor had written into being. I was completely wrong about that. The student was real the whole time. Instead the play was about suicide and the character who actually committed suicide was not the one you expected. I kind of like my idea of the student being just in the head of the professor, but that is a bit too predictable.

I loved this play because it was very serious and it concerned writers. The lonely professor of creative writing getting involved with a student is a bit of a cliché but I think Adam Rapp might have some actual experience in this area. I hope I never have to teach writing or literature. I just don’t think that is appropriate for a visionary writer. I kind of anticipated this possibility in my play Charcoal Sketches but I considered how the muse would sabotage an inspired artist who gets too comfortable and lazy.