The Trip Home From Boston

I wasn’t going to blog about my final day in Boston since it was just spent on the trip home, but there are a few details I should record for future reference. 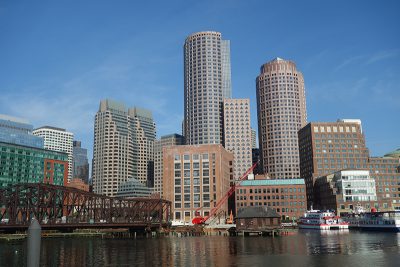 I had breakfast as usual at Caffe Nero and then I walked around the Seaport District Harbor Walk to take some final photos of the Boston skyline. I waited until about 10:00 a.m. to check out of my hotel. I used the touch screen tablet to check myself out of the hotel and got a print out of my bill. Then I went to the Courthouse Station and used the SL1 Logan Airport bus to get to the airport instead of taking a taxi. I did have to wait for a second bus since the first one was too crowded for me to enter with my luggage. My plane would not depart until 5:00 p.m. so I had plenty of time. When I arrived at the airport the bus made stops at every terminal so I was able to get off at the American Airlines terminal. Fortunately my big piece of luggage which was my checked bag was not over-weight. I had bought a lot of books but I tried to limit myself to thin books. My carry on bag had to be examined when I went though security. Once I was through security I immediately went to a food court and ordered a Quarter Pounder, fries, and coke at a McDonald’s. After eating I found my gate B6 but I did not sit there since several flights would be leaving from there before mine. I sat near the restrooms and spent several hours reading a book on my Kindle. I was reading A Wizard of Earthsea by Ursula K. Le Guin. 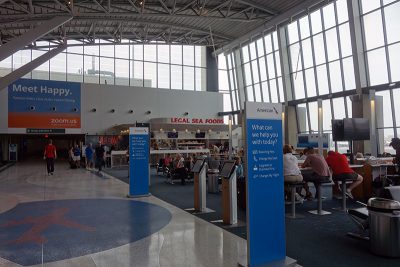 After what seemed like an eternity, it was time for my flight to depart for Philadelphia. I tried to use the in flight entertainment on my smart phone over WiFi but although I could connect, every movie I tried to see expired. This was annoying but it was a short flight so I could watch the music videos I had saved on my phone. I also read more of A Wizard of Earthsea on my Kindle. When we landed, our plane was kept on the runway for around three hours because there had been a thunderstorm which backed up the arriving flights. I think they also closed the gates due to some stray lightning. This really annoyed me because it grew dark by the time we finally arrived at our gate. We were kept so long on the runway that I was able to finish reading A Wizard of Earthsea by Ursula K. Le Guin.

Fortunately I didn’t have any trouble finding my way home even though I had to drive in the dark. I managed to leave the Economy Parking lot and get on the correct highway using the very precise instructions I created after previous trips. Finding a shuttle bus to the Economy Parking lot was a little tricky. I had to ask a taxi stand attendant for directions.

Unfortunately, this trip to Boston was extremely expensive. It will probably be the last major vacation I will go on for a long while until I can pay down my credit card debt. My arthritic knee was troubling me during the entire two weeks so that may be something I will need to see my doctor about. When I can afford it, I am thinking of spending a week in New York City. I’ve seen everything there is to see in New York City but I could do things in the evenings which I have been unable to do on my day trips. I would also like to spend some quality time in New York City for a change, instead of these rushed day trips.

I think my trip to Boston was worth it. I made it a cultural trip and learned a great deal about the Boston theater community, its technology community, and the important universities Harvard and MIT. This was my very first visit to New England and the last major East Coast city I had yet to see.

This entry was posted in General, Travel. Bookmark the permalink.