Springtime in the Poconos

Today I went on a bus trip to the Poconos. Susquehanna Trailways rarely offers tours to the Poconos so I jumped at the chance. I was fortunate that this trip was not canceled because there were only 14 passengers. They usually cancel tours when they cannot get enough passengers to make it worth while. The fact that this day trip was not on a weekend was probably a factor. I had to use a vacation day to make this trip.

I was exploring the Poconos extensively in 2014 but I didn’t do any of the things included on this tour. The Poconos area interests me because it is culturally similar to Central Pennsylvania with a low cost of living but it is much closer to New York City. If I had to move I would try to establish myself in the Poconos but the area has virtually no Information Technology industry. 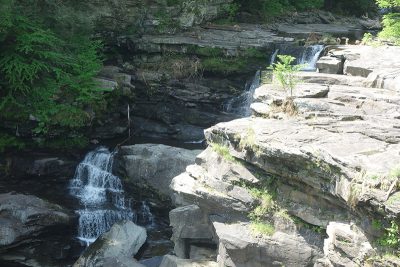 The second stop on the tour was The Waterfront at Silver Birches where we had lunch. This place looked familiar to me and it turned out to be Ehrhardt’s Waterfront Resort under a new name. I sat next to the tour escort and she remembered a previous trip to Steamtown National Park that included lunch and a show at Ehrhardt’s Waterfront Resort. She was also the escort for that previous trip and she remembered me. The Waterfront at Silver Birches looks out on Lake Wallenpaupack. We had slices of turkey, roast beef, mashed potatoes, stuffing, cranberry sauce, and even a small cup of tomato juice which I thought was an odd touch. For desert there was a small slice of cheesecake. 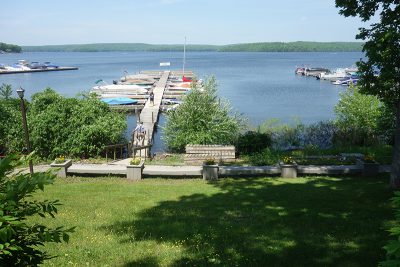 The Waterfront at Silver Birches

I should note that there were three tour buses from different bus companies and we seemed to be going to the same places all day so I’m not sure who put this tour together. There was a Catawese Coach Lines bus from Shamokin, PA.

The final stop on the tour was a train ride on the Stourbridge Line. This excursion line was not running back in 2014. Strangely enough, we got on the train in Hawley and got off in Honesdale where the tour buses met us. I didn’t even know that Hawley had a train station. Technically all of the days activities were centered around the same small area of Hawley. 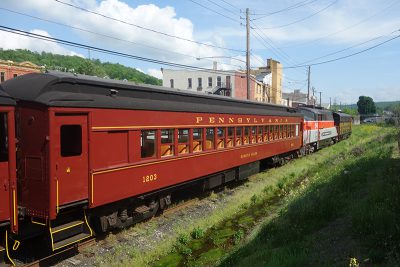 We left Honesdale around 4:00 p.m. and I got home at around 7:00 p.m. so it wasn’t as late as a New York City trip. During the long bus ride I was mostly reading Robert A. Heinlein’s The Puppet Masters on my Kindle. I’d been warned that this 1951 science fiction novel was horribly sexist and it did prove to be hilariously sexist. Robert A. Heinlein writes like a total horndog. It is so over-the-top sexist that it almost seems like a parody. However, it is still an remarkably good science fiction novel. It was responsible for the whole “brain slug” trope.