I took the Red Line to Park Street and then the Green Line to Science Park but I wound up getting on and off several trains to get closer to that final Green Line station. It was not immediately apparent how to reach the Museum of Science but I followed some other tourists. I saw the dinosaur statue outside the museum. I used the final ticket in my CityPass but I also bought a planetarium ticket for Moons at 1:30 p.m. As soon as I entered the first exhibition hall I began to experience problems with my digital camera. It would not zoom and none of the function or menu buttons would work. It wouldn’t focus or adjust for lighting unless I turned it back on while pointing at something. I tried changing the battery but nothing helped. Later in the day this problem mysteriously disappeared but it was quite upsetting for most of my time in the exhibits.

I found the Colby Room rather quickly but you could not go inside. I managed to take some good photos of Triceratops Cliff even though I could not zoom. I saw a special exhibit on crocodiles. 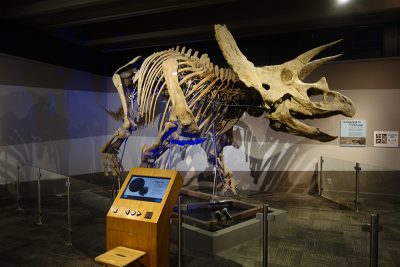 I saw 4D: The Martian in the Blue Wing, Level 2. 4D meant the seats vibrated, wind was blown at you, confetti rained down, and most annoyingly water splashed in your face.

At the Riverview Cafe I grabbed a Cranberry Turkey Sandwich, a Yogurt Parfait and bottle of orange juice. As I was eating I discovered that my digital camera was performing normally again.

I used the ATM in the Museum of Science to withdraw another $200.

I checked out the Mugar Omni Theater and the Charles Hayden Planetarium and walked through the Museum Store where they were selling the book Data and Goliath: The Hidden Battles to Collect Your Data and Control Your World. I tried to re-enter the Blue and Green Wings but the gate keeper would not let me pass. I was supposed to get a hand stamp and they tore the ticket out of my CityPass book so I had no proof of prior entry. This really pissed me off. I still had to kill over an hour before the planetarium show. I went outside briefly and bought a raspberry Popsicle and then a bottle of lemonade. Eventually I saw the Moons planetarium show which was pretty cool and informative.

I left the museum around 2:15 p.m. and it looked like a thunderstorm was coming when I got outside so I went directly back to my hotel to avoid any more disasters that day. 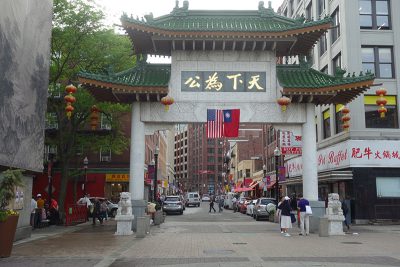 But around 5:00 p.m. I went out again with my umbrella and took the Silver Line to South Station. I got out at South Station and walked to Chinatown to photograph the Freedom Gate and various Chinese restaurants. I walked up Washington Street and photographed King’s Chapel, Marliave, and Emmet’s Irish Pub and Restaurant. I had made a reservation at Marliave for 6:30 p.m. I ordered escargot and a glass of sparkling white wine. The restaurant was very dark so I could not see what I was eating but the snails tasted like mushroom. 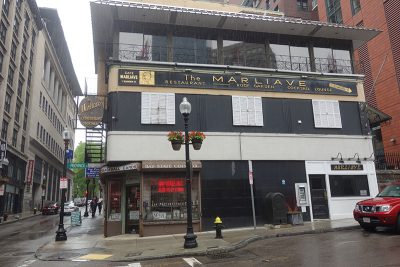 After eating I visited the Granary Burying Ground and then walked all the way to Faneuil Hall where I saw some kids playing stringed instruments and an Asian girl playing her violin. I then walked back to the hotel taking many photos in the dying light of late afternoon.

This entry was posted in General, Travel and tagged Chinatown, Marliave, Museum of Science. Bookmark the permalink.