On my fifth day in Los Angeles I spent the entire day at Universal Studios Hollywood. This theme park was a lot of fun and I can understand how somebody might come to Los Angeles just for this. It was also the most expensive activity of the trip because my One Day Anytime Admission was $115.00. I could have saved $10 because I did visit on a specific day as intended but I wanted to give myself some leeway to change plans. 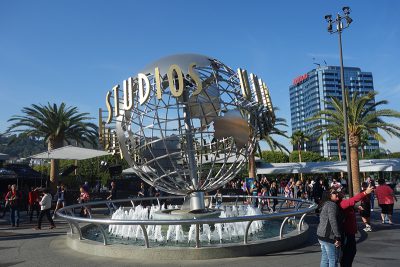 I took the Metro Red Line to the Universal City Station which is just one stop from the North Hollywood Station. In fact, my hotel is where some people stay when they just want to visit Universal Studios Hollywood. There was crosswalk over the freeway to the free shuttle tram which takes you up a hill to the theme park entrance. I think you could just walk but that would have been tiring. They scanned your right forefinger for entry so I guess a non-human would be out of luck.

The first ride I went on was the Wizarding World Of Harry Potter. After walking through the dark castle with animated paintings you go on the virtual roller coaster ride which was an amazing 3D experience. I’m not sure how much of the ride was real but it did feel like I was being hurled around. The 3D scenes looked very real and required wearing 3D glasses. I used the restrooms in this section of the park and even the restrooms had a Harry Potter theme with appropriate sound effects.

Next I did the Studio Tour which included King Kong 360 3D and the Fast & Furious Supercharged 3D. The tour was more like a theme park ride than a real tour but it did go through some studio lots and there was some television filming going on. I saw the War of the Worlds plane crash set which was very impressive, the flash flood, and the Jaws and Earthquake staged events.

After that I saw the Waterworld show with live stunts and explosions. I’ve never seen that movie which flopped but the live show was very exciting and featured some real actors who have appeared in various television shows. I took a lot of photos during the show trying to capture the explosions and the other action. Some of the people in the soak zone got splashed with water. This is probably the only live action movie you would ever see and just like a musical with live dancing and singing, it is quite magical to see all this stuff go on in real life right in front of you. 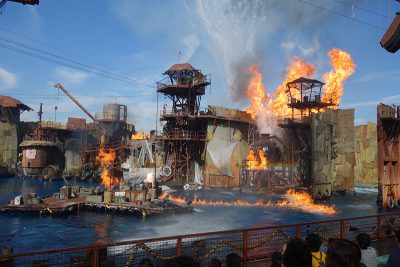 When the show was over I took the many escalators to the lower lot and rode the rides; Revenge of the Mummy, Transformers 3D, and Jurassic Park which got me a little wet. Most of the restaurants in the park were closed so I had to eat at Panda Express where I ordered Plate #5; Orange Chicken and Korean Beef plus a large coke.

After eating lunch I returned to the Upper Lot and saw the Special Effects Show which had a large audience. Then I rode the Simpsons Ride which was another virtual 3D ride. It was really hard to tell how much of the ride was real. But all of the rides were a lot of fun and genuinely exhilarating and thrilling. I think the Wizarding World Of Harry Potter was the most extreme ride. That one really had me scared because it was kind of hard to figure out what was really going on and it jerked you around pretty hard. 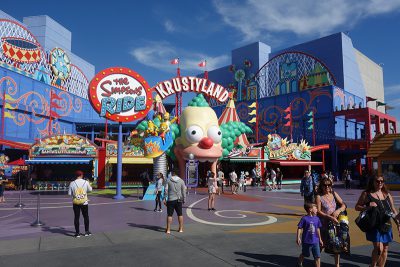 There were some costumed characters wandering around and I swear the Frankenstein monster came right at me after I took his photo.

After leaving the theme park I went shopping at the Universal Citywalk which is outside of the actual theme park but nearby. I bought a Sitting Horus statuette at Upstart Crow. This statuette was pretty nice but not real expensive. It satisfied my craving for something Egyptian and mystical. Hollywood has always had a fascination with Egypt and mummies. I also bought the Doctor Strange: The Way of the Weird graphic novel at Things From Another World, a cool comic book store on the Universal Citywalk. I’m not into comic books but there was a Doctor Strange movie coming out and I like mysticism and anything weird. 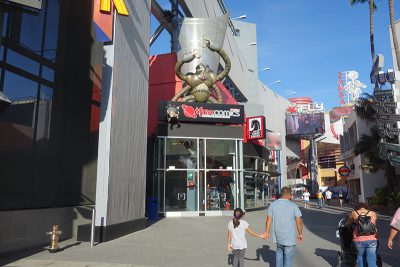 Things From Another World

That evening I attended the opening ceremony of the Lit Crawl L.A. There was a poetry reading outside the North Hollywood Station. This was a very fortunate literary event because I planned my trip to take place over Halloween and not to coincide with anything else that was going on. I was not familiar with any of the poets there so I will attempt to identify them now. First up, there was Jessica M. Wilson, founder and director of the Los Angeles Poet Society. And I saw Juan Cardenas, vice president of the Los Angeles Poet Society. This organization had a table set up to distribute information and sell books. Alejandro Molina did a little dance with his poem. He is also an actor and a playwright which must explain his urge to perform. Jeffrey Alan Rochlin was associated with the Cobalt Cafe. Jeffrey Martin was the black poet. He has some photos from the Lit Crawl L.A. on his Facebook page so I’m sure he was there. I can also identify Radomir Vojtech Luza and Doren M. Damico with the streak of white in her hair. 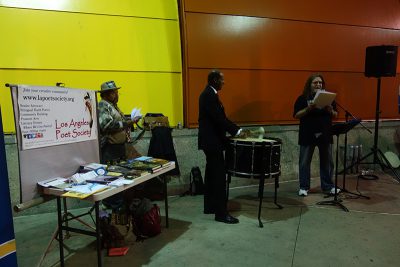 I did buy the poetry anthology Coiled Serpent which I saw Jessica M. Wilson holding up. It features many Los Angeles poets. I had to order the Coiled Serpent book on Amazon because I did not find it in any Los Angeles book store. Probably the only Los Angeles poet I’m familiar with is Charles Bukowski and I almost forgot that he lived most of his life in Los Angeles. Later on I came across a mural featuring Charles Bukowski and I made sure to get a photo of it. I also like the poetry of Gerald Locklin who writes very witty and self-deprecating poems but he is more closely associated with Long Beach. 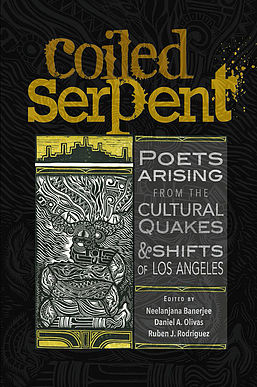 There was a local representative attending the event to show her support for the arts. And there was a drum circle to accompany the poetry reading. I got a Los Angles County Public Library book bag filled with a few goodies including a copy of the Los Angeles Review of Books Quarterly Journal for Spring 2016. Unfortunately I could not attend any of the other Lit Crawl L.A. events because I had a play to see that evening.

I was pleased to make this literary event part of my trip because I like to explore the culture of the cities I visit. There is always the idea at the back of my mind that I will discover something useful for my own creative endeavors. This is probably true of my extensive research into the New York City theater community but I don’t tend to get anything out of other trips to fully justify the expense. My interest in poetry has waned but I’ve never completely lost interest. Frankly I think being a playwright is a lot more glamorous than being a poet.

Which is why I really looked forward to the play I saw that evening. I saw The Horla by Andy McQuade at the Sherry Theater on West Magnolia Boulevard. This small storefront theater was in North Hollywood so I was able to walk to it. Technically this show was part of the NoHo Fringe Festival but this festival seemed poorly organized and was comprised of only a few shows by participating theaters which just included the shows they were doing anyway. At least that was my impression. Only nine people showed up to see The Horla in a theater that probably could only have seated fifty. It was a very small black box theater. For awhile I thought I would be the only person in the audience which would have been awkward. I think I actually meet Andy McQuade because a man with a British accent greeted me and gave me the only program they had. Apparently they forgot to bring the other programs. 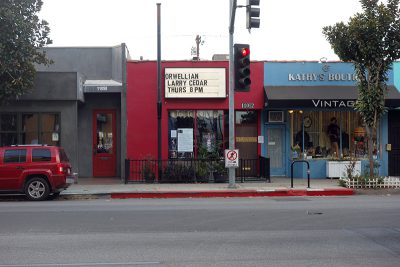 The Horla began with a short art film which was actually a bit haunting and some stage smoke which was a nice effect. The play itself was basically a one person show starring an attractive young actress who gradually went mad. Frankly that was a bit tedious. At one point I saw a cockroach scurry across the stage and the roach held my attention for the entire time it was visible. It is really mean of me to mention that but I cannot resist being witty. The actress was upstaged by that cockroach. But seriously, she gave a great performance. I did feel a little existential dread watching her lose her mind in that shabby room.

That was the first of three plays I saw during my trip. I probably should have tried to see even more but I didn’t want to go out too much late at night.