On Tuesday I spent the day exploring downtown Los Angeles. I took the Metro Red Line to the Civic Center Station. This took 42 minutes according to my photo timestamps. I quickly located the Dorothy Chandler Pavilion and Walt Disney Concert Hall on Grand Avenue. Then I went to the Mark Taper Forum and took lots of photos of that after crossing Grand Avenue to reach the plaza. I then walked to the Cathedral of Our Lady of the Angels on Temple Street and entered its courtyard to take some more photos. But I didn’t try to go inside. 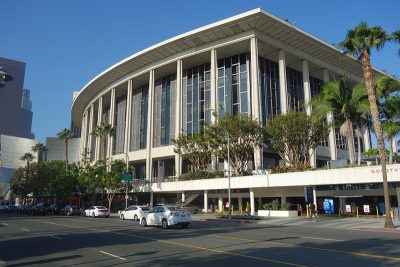 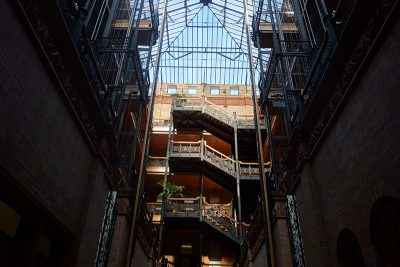 After that I continued to walk south on Broadway looking for various historic theaters. Most of these old theaters have been abandoned and you’ll only see their marquees but a few have been restored and put to use. I saw the iconic Los Angeles Theater and several others; State Theater, Tower Theater, Orpheum Theater, Globe Theater, Rialto, Palace Theater, and Roxie Theater. This part of downtown was pretty shabby and reminded me of how gritty cities used to look.

I saw a Two Boots Pizza place but they did not have any interior seating. Two Boots Pizza has become my favorite place for a cheap bite to eat in New York City. I saw Eastern Columbia Building which had a model being photographed in front of it. I never added this landmark building to my notes because I was rushed to complete my trip planning. I only walked as far down Broadway as the New Mikado sushi house on Olympic Boulevard.

On the return trip up Broadway I came across a labor union protest by the Garment Worker Center. They were protesting Ross Dress for Less. One of the protestors handed me a flyer which I accepted in order to document the incident. I had noticed an Univision 34 Los Angeles Noticias news van parked in front of Ross earlier. They must have been there in anticipation of the union picketing. 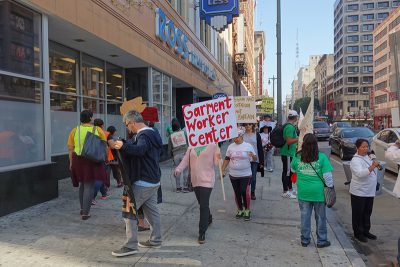 I walked back to Civic Center Station and took the Red Line to Union Station. I took many photos at Union Station to document the transit hub layout for my notes. I found the entrance to the Patsaouras Transit Plaza where you can catch various buses. I saw the entrance to Red and Purple Rail Lines (subway) and the Gold Line (in the underground passageway). I used the restroom which only had three stalls. The restrooms appeared to be used by the homeless. I walked through the underground passageway to Union Station West and went outside to find Olvera Street and El Pueblo de Los Angeles State Historic Park which is on Alameda Street.

I explored Olvera Street and El Pueblo de Los Angeles State Historic Park. Olvera Street is filled with many stalls selling Mexican trinkets. Most of the merchandise was cheap stuff so I wasn’t tempted to buy anything. I did see lots of Day of the Dead sugar skulls (Dia de los Muertos). I’m fascinated by excessive make-up and face painting. Some of the Dia de los Muertos artwork I saw was pretty cool since it was exotic and a little morbid. I was inspired to check out Mexican art and later on I did find a book on Mexican graphic design. There was a small art gallery which I visited just before going down the street of shops. I walked through the Avila Adobe which was a small museum for the oldest existing home in the city. I also visited the museum for the Tropical America: Oppressed and Destroyed by Imperialism) mural by David Siqueiros. I saw a NBCLA.com channel 4 news van at the El Pueblo de Los Angeles State Historic Park. Just another instance of the many news vans I encountered. I’ve never been to Mexico so this was my first encounter with Mexican culture although I understand this was not very authentic. 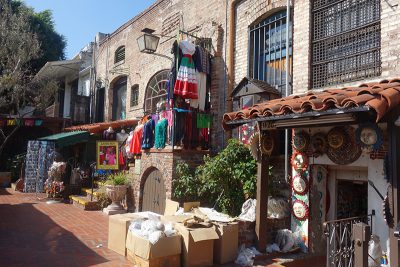 I returned to Union Station and took the Red Line back to the Civic Center Station to visit The Broad. Based on my photo timestamps it must have taken me an hour and a half to get inside. The museum is free but a long line forms to get in and they take their sweet time allowing people to enter. I took a lot of photos of the artwork so I could identify it later. I’m always inspired by an art museum visit and I always intend to follow up on the experience but I never do. I get a lot of inspiration but I never create anything. The wait for the Infinity Mirrored Room would have been two hours so I skipped that! There was no Cindy Sherman special exhibition even though one was indicated in the museum guide. I did see some Pop Art and several Andy Warhol silk screens. But there really wasn’t a lot to see to make the long wait worthwhile. I was too annoyed to buy anything in the gift shop. 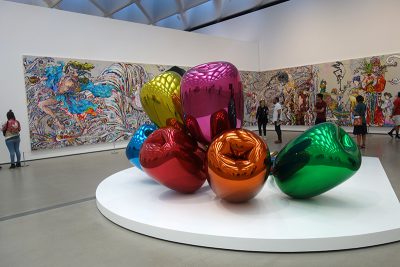 While standing in line I noticed the entrance to the REDCAT, a theater and performance space in the Walt Disney Concert Hall complex, so I made sure to get some photos of that after leaving The Broad. The nearby Museum of Contemporary Art was closed but I did take some photos of Nancy Rubins’ monumental stainless-steel sculpture Mark Thompson’s Airplane Parts (2001), purchased by MOCA in honor of founding member Beatrice Gersh in 2002, installed at the museum’s plaza. 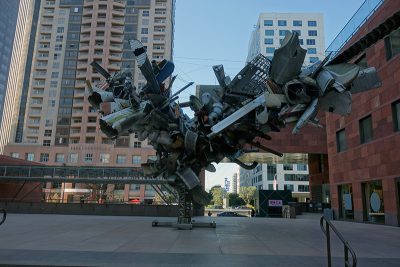 Next, I walked to the Los Angeles Central Library but I did not go inside. From there I walked to the Pershing Square Park where I saw some LAPD cops wearing cowboy hats and riding horses. I did not know that Los Angeles had wild west sheriffs but lots of cops act like gunslingers nowadays. 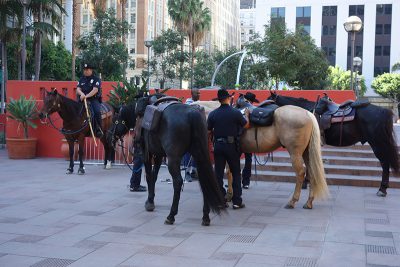 By that time I was getting pretty hungry so I went to the Grand Central Market where I had a Pollo Guisado (chicken stew) at Sarita’s Pupuseria. It came with two tortillas which I stuffed with stew and mole. I also had a small can of coke. This was Salvadorean cuisine. The pickled cabbage slaw was interesting.

I bought two books at the Last Bookstore; The Performance of Heartbreak and Other Plays by Scott Caan, and The Plays of Anton Chekhov translated by Paul Schmidt. Scott Caan is an Hawaii Five-0 actor and a local Los Angeles playwright. I had to show my receipt on the way out and get a circle drawn on it.

This was a busy day for me. I walked all over downtown Los Angeles and according to my pedometer I walked 4.5 miles or 24,755 steps. Downtown Los Angeles is just one of the many urban areas you could explore in this immense city. That is why I decided to devote two weeks to this city instead of the usual one week.