On my first weekday in Los Angeles I mostly did a little shopping. I also got a little more familiar with the public transportation system. First I took the Metro Red Line to the Hollywood Highland Station. I located the Hollywood Museum, Mel’s Diner, and the Hollywood High School which I had overlooked the previous day. I walked all the way to the Hollywood Pacific Theater and then up North Cahuenga to a CVS Pharmacy where I bought an umbrella because it did rain a little that morning. Later on I bought a detailed street map of Los Angeles because the WiFi was briefly unavailable in my hotel room last evening and I had no way to find things on a map.

I walked down Orange Street to Sunset Boulevard and took the 2 Local Bus to the Samuel French Film & Theatre Bookshop. This was an important goal for me because this book store is devoted to scripts (film scripts and printed plays) just like the Drama Book Shop in New York City. The Samuel French Film & Theatre Bookshop is famous among playwrights and screenwriters and serves as a hub for the Los Angeles writing community. I bought four books because they had everything I was looking for and plays tend to make for thin books. I bought The Elaborate Entrance of Chad Deity by Kristoffer Diaz, Rest by Samuel D. Hunter, King Hedley II by August Wilson, and Gem Of The Ocean by August Wilson. Samuel D. Hunter is one of my favorite contemporary playwrights because he writes sensitive plays about everyday people struggling in the mundane world. August Wilson is famous for his cycle of ten plays, The Pittsburgh Cycle, which serves as the most significant body of work for African Americans. But for me August Wilson is just the most successful playwright from Pennsylvania. 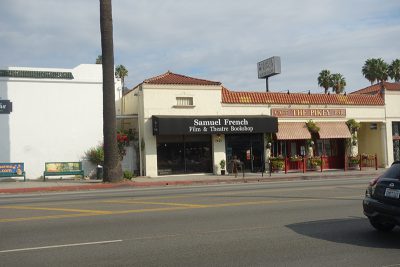 Since I arrived at the Samuel French Film & Theatre Bookshop just before it opened, I walked a little further up Sunset Boulevard before buying those books. I came across some interesting establishments like the International Cinematographers Guild and the Motion Picture Editors Guild. After taking the 2 Local Bus back to Orange Street, I stopped in at an In-N-Out Burger where I ordered a cheeseburger with fries and a medium coke. This was my first chance to try an In-N-Out Burger since the one in San Francisco last year had been way too crowded. After leaving the restaurant I discovered a hole in my pants pocket as some of my change fell out. This was the only real problem I had during the entire trip.

When I got back to Hollywood Boulevard I walked all the way to Larry Edmunds Cinema Bookshop which was open on Mondays and bought two books; The Kept Girl by Kim Cooper and Devising Theatre by Alison Oddey. These were used books with some grime on them and they were quite expensive, probably the original full price. But I thought the Devising Theatre was the best book in the store on the practice of theater and I shall strive to actually get something out of it. 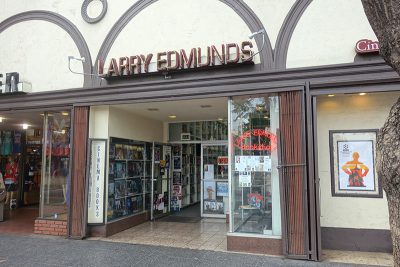 I took the Metro Red Line back to the North Hollywood Station since I now had several packages to carry around. My hotel room had not been cleaned so I quickly went back out. In anticipation of a need to follow my directions to a theater to see a play later that week, I took the Metro Orange Line to Laurel Canyon Boulevard and photographed the Eclectic Company Theatre. The Eclectic Company Theatre is the only connection I have with North Hollywood since that is were the First Stage Playwrights’ Express was held last year. This writer’s group will do a staged reading of anything you care to submit for $70 and send you a DVD. I sent them a 15 minute comedy sketch I wrote but they did a terrible reading and misspelled my name. Still, I think there should be more opportunities for a playwright to get something done if he or she is willing to pay for it. I mean no questions asked opportunities where nobody is serving as a cultural gate keeper. This was a short bus trip so it was worth it even if it was only to take some photos. The bus bays did not match the diagram I had in my notes and I later discovered that there was another set of bus bays to the east of the Metro Red Line North Hollywood Station. I thought the Orange Line bus bays to the west were the only ones. Bays 2 to 4 were for disembarking only. You did not use your TAP card on the bus, but at a sort of fare post at the station. That was a little confusing. You should definitely plan a few unimportant trips using public transportation just to get the hang of things before going on a lengthy ride to someplace where you need to be on time. 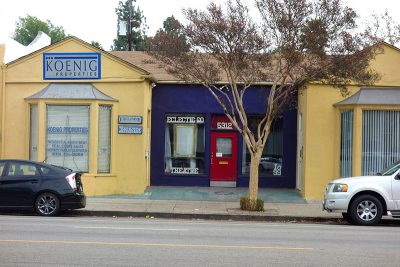 After getting back to the North Hollywood Red Line Station on the Orange Line Bus I walked to Walgreens on Magnolia Boulevard and bought a pair of nail clippers and a 115 piece sewing kit to repair my pants pocket. I made sure to ask for a bag since in California they change 10 cents for a plastic bag and they will not give you one if you don’t ask for one.

To kill some more time before returning to my hotel, where the room had not been cleaned, I went to Laemmle’s NoHo 7 on Lankershim Boulevard and watched the film Kevin Hart: What now? at its 1:50 p.m. showing. I thought this was going to be some kind of black action movie I’d never heard of but it proved to be a comedy show in a big stadium in Philadelphia. Kevin Hart is funny but his comedy routine is basically just him telling amusing stories that seemed pretty tame. Nothing about his act seemed the least bit adventurous. For instance, his act featured a bit about a scary racoon. I paid $8.00 for the ticket and bought a small coke which proved to be pretty big.

This was the first day on which I kept my pedometer in my pocket to see how much walking I was doing. I walked 3.2 miles or 17,957 steps. During my trip I did develop a large blister on one of my small toes but that was the only injury and I came prepared with bandages for blisters.