For the first day of the Labor Day weekend I drove to Jim Thorpe PA. This was my forth trip to Jim Thorpe PA. It is my favorite small town in Pennsylvania. I suppose I could come to like New Hope PA more but that town is too far away to visit often. My agenda on this trip was to try to see something new. I’ve already explored Jim Thorpe pretty extensively but I did manage to check out some more places. 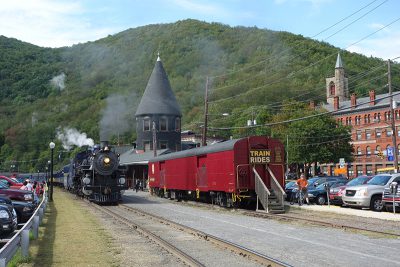 I arrived in Jim Thorpe PA at around 9:45 a.m. I didn’t want to reach my destination early in the morning because most of the stores would not be open. I wasn’t going to take a lot of photos on this trip but I had a new camera so I took plenty of high quality photos anyway.  The first thing I did was walk all the way up Broadway and further west on West Broadway than I’ve ever ventured before. I came across what might be an art gallery but the sign was very general “Food Art Drink”. I also saw a house painted purple and a very weathered three story building with a bay window. I’m always attracted to ruins more than anything else on my travels. I wondered if this place was for sale. I imagined converting it into some sort of groovy bohemian honky-tonk. It was probably too far from the downtown area to get much commercial traffic.

I turned back and walked back downtown. By then it was past 10:00 a.m. so I could go to Sellers Books, which had moved next door to China Garden. There I bought a collection of short stories by Anton Chekhov. Although I’m mostly interested in his plays,  Anton Chekhov is also famous for his short stories. Then I went to Soundcheck Records and bought a CD, Go – the Very Best Of Moby. I’m not very familiar with Moby but I do like his cover version of New Dawn Fades, the most despairing song ever written. I used the restroom at the visitor’s center in the train depot before returning to my car to drop off my purchases.

My next goal was to get something to eat. Just about the only thing left for me to do in Jim Thorpe PA is to try a different restaurant, so this time I went to Broadway Grille in The Inn at Jim Thorpe. They were still serving breakfast so I ordered a cup of coffee and Eggs Benedict. I don’t think I’ve ever had Eggs Benedict before. It is two halves of an English muffin each of which is topped with Canadian bacon, a poached egg, and hollandaise sauce. This wasn’t a very fulfilling meal but it was reasonably priced. 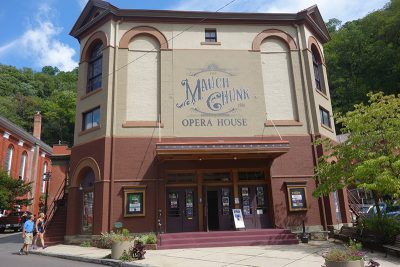 After lunch I walked back up Broadway and finally entered the Mauch Chunk Opera House which had its doors open. I saw the stage and the seats but the theater was darkened. I guess the place was only open so you could look at a few pieces of artwork but there weren’t enough to qualify as a gallery. Some day I will have to make an overnight trip to Jim Thorpe to see a show at the Mauch Chunk Opera House. I then walked back downtown and went south on Susquehanna Street to take photos of Woods Ice Cream, an establishment I don’t have in my notes. Then I walked up Race Street where I saw a classic car, a 1956 Studebaker Commander. On a previous trip I had seen a different classic car parked at the same place. I stopped in at Serendipity which is an antiques store that mostly sells old books. I found a copy of The Barretts Of Wimpole Street by Rudolf Besier, a play based on the romance between Robert Browning and Elizabeth Barrett. This book was on my wish list so I was pleased to have found it. 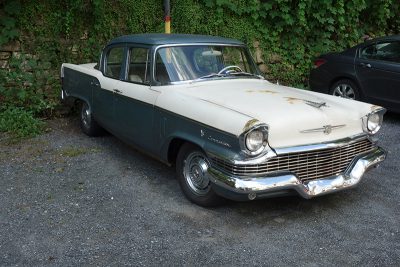 By then it was Noon and I could have gone home but I still wanted to see if Jim Thorpe had anything left to offer so I went to Pocono Biking and rented a bike to ride on the Lehigh Gorge Rail-Trail. This wasn’t planned so I didn’t know what to expect. You have to fill out a waiver form to rent a bike and give them your identification to keep until you return the bike. It cost $21.49 for the bike shuttle and $21.50 for the bike rental so the total was $42.99 which seemed pretty expensive. They gave me a green card for the bike and a red card for the shuttle bus plus a wristband which served some mysterious purpose since I was not required to wear it. I remember my bike was #55. Although the bike rental was unexpectedly expensive, I guess it was worth it since the bike ride lasted for several hours and it was incredibly fun.

The shuttle bus drove us all the way north to the Rockport Access Point near Weatherly PA. This is about five miles from Jim Thorpe PA. This made me a little anxious because I knew I would have to ride the bike all the way back to Jim Thorpe.  Fortunately the bike trail was all downhill from Rockport to Jim Thorpe. According to the Pocono Biking brochure this is 15 miles of trail so it is pretty remarkable that it is all downhill for that entire length. But indeed that was the case and I did not have to exert myself much. Before heading south, I rode north a little ways to see the Buttermilk Falls at Mile 120. Then I began the long trek south back to Jim Thorpe. The entire trip took me three hours, from 1:00 p.m. to 3:50 p.m. Fortunately I had one bottle of Sparkling Ice with me but I did get a little dehydrated. I also should have brought my bike helmet. The bike ride was long but very pleasant since the scenery was incredible. There were a lot of people on the bike trail so I constantly had someone coming up behind me. Along the way I saw many rafts on the Lehigh River doing whitewater rafting. I also saw a few other waterfalls, railroad tracks, bridges, and a few railroad cars. I was even able to stop and see the abandoned railroad tunnel which is like going into a cave. As I got closer to Jim Thorpe I was able to ride under the new 903 bridge. They have not torn down the old bridge yet. This bike ride was definitely one the greatest experiences I have had in my travels through Pennsylvania. I would definitely do it again but I would be a little better prepared. 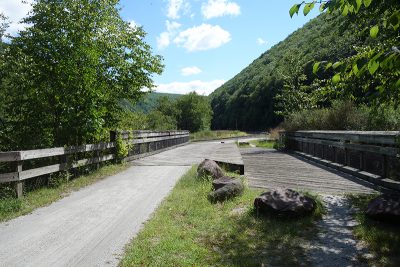 Although I expected to be exhausted by the time I got back to town, the 15 mile bike ride was so easy that I wasn’t ready to go home just yet. First I climbed Packer Hill to take some photos of the Packer Mansion. Climbing up there was actually more exhausting than the bike ride! I did come across something I had not noticed before, Kemmerer Park, which is a small park across from the Harry Packer Mansion. This park wasn’t very big but it was pleasant enough and sort of hidden away. It seemed to be designed for children with swings and play areas. After that I walked to Woods Ice Cream to treat myself to some strawberry ice cream. 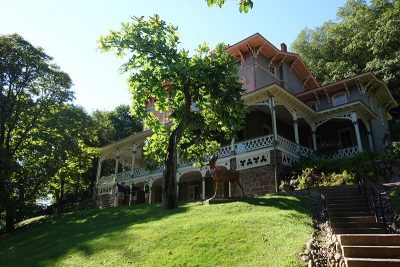 The final thing I did before heading home was to drive up Flagstaff Mountain to find the lookout where you can take some incredible views of Jim Thorpe from a high vantage point. Unfortunately Flagstaff Mountain Resort seems to have the best view blocked off but there was an overlook where I could take photos of the valley. Further up Flagstaff Road there was a property developer offering a free overlook view but this was a view to the east.

This trip was the best trip to Jim Thorpe PA I’ve had to date. Unfortunately I think I have really exhausted the possibilities by now. Still, Jim Thorpe is a very picturesque town and worth a casual visit.