Yesterday I made my second trip to Brooklyn. For this trip I concentrated on Williamsburg, a neighborhood in North Brooklyn which has become the new bohemia. This neighborhood is undergoing rapid gentrification so I saw a lot of construction and new high rise condominiums replacing factories and older housing. I took lots of photos since Google Street View and various tourist photos don’t reflect the recent changes in Williamsburg.

The Susquehanna Trailways bus dropped us off in front of the Times Square Church even though they are no longer supposed to use that spot. This was a bit of a problem when it came time to be picked up since the street was narrowed for construction and our bus really blocked the street to pick us up. Fortunately everyone was there on time and we got on the bus in record time. But I’m getting ahead of myself.  I walked to the 49th Street Subway Station outside Olive Garden on the north end of Times Square across from the TKTS Ticket Booth. I took the N train down to Union Square and transferred to the L train. I’ve heard that the L train is usually very crowded but it wasn’t crowded at all around 10:30 a.m. I got off at the Bedford Avenue subway station which is the famous portal to Williamsburg in Brooklyn.

I walked west on Driggs Avenue to Metropolitan Avenue which is one of the streets I extensively researched. I went north up Metropolitan Avenue to Wythe Avenue which I followed east to find National Sawdust. I’m not going to continue to describe which streets I walked along since I wandered quite a bit. National Sawdust is a music venue. The exterior features a very colorful mural. The interior has a very futuristic studio design but I did not go inside. This is one of the establishments which is poorly documented on the Internet so I took plenty of photos. Further along Wythe Avenue I saw the Wythe Hotel, the Brooklyn Brewery, the Brooklyn Bowl music venue, and the Output nightclub. It was particularly difficult for me to find any decent photos of the Output nightclub online while researching my trip so I took plenty of photos of its exterior. 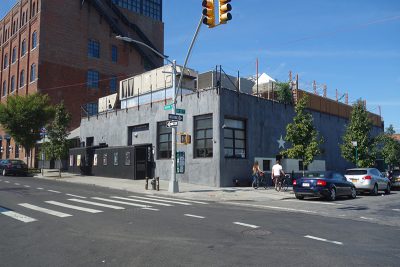 After that I did some more walking around Williamsburg including Bedford Avenue, the main commercial drag which is filled with retail stores, trendy boutiques, and fine restaurants. I saw the Apple retail store and the WeWork office space, signs of how gentrified the neighborhood has become. Eventually I followed Metropolitan Avenue far east to find the Knitting Factory and the City Reliquary Museum. After walking under the Brooklyn Queens Expressway I found other establishments on my list; Fool’s Gold Records, Desert Island Comics, and Norman’s Sound and Vision Records. 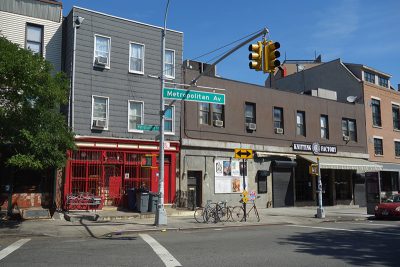 I’m not sure I understand the process of gentrification. Young artists flock to an urban neighborhood with cheap rent and make it a hip and trendy neighborhood. Then the retailers follow and open up quirky boutiques and interesting restaurants. Finally the developers catch on and begin to put up condominiums. At that point, the neighborhood has been fully gentrified and rents go way up so the young artists are pushed out to the next neighborhood, which will be Bushwick. I can sort of understand this process if a neighborhood had become famous through its association with many creative people, but in New York City this appears to happen far too quickly. Brooklyn is rapidly becoming the new Manhattan. There are so many skyscrapers in downtown Brooklyn that you can’t even tell if it isn’t Manhattan in the random photo. So Williamsburg is a bit past its prime as the new bohemia but it was still cool to visit someplace where contemporary bohemians are making cultural history.

The first actual activity I engaged in besides snapping photos was to have a meal. I went to Caracas Arepa Bar, a Venezuelan rum bar and arepa restaurant. I’m glad I choose one of the great ethnic restaurants that Brooklyn is known for and not a more conventional tourist trap restaurant in the theater district. I ordered Yoyos, sweet plantains with white cheese, fried in a cinnamon plantain batter. A plantain is like a banana, although not as sweet. However, the Yoyos tasted just like bananas, but it was a little exotic and very delicious. I ate them all up! I also had a Manhattan Rum which made me a little drunk and an arepa, which is a maize flour patty stuffed with meat, sort of like a hot pocket but a lot more exotic. This was a very interesting sample of Venezuelan cuisine. There was also a Tunisian restaurant I was tempted to try but unfortunately I can only eat one meal within a few hours. 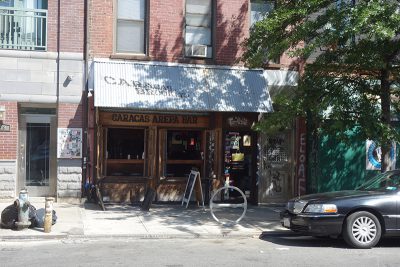 After lunch I was ready for some shopping. I didn’t immediately start shopping because carrying bags around makes it harder to take photos. But by then I had been taking photos for two hours straight. First I went to a huge record store, Rough Trade, on North 9th Street. I made a list of CDs to buy but unfortunately the store’s selection was not extensive enough to include the obscure albums I’m looking for. I was only able to find an album by St. Vincent, a fairly well known singer. However, while doing my research on Williamsburg I came across a great new band, Mother Feather. I bought their self-titled debut album and I love every song on it. I’ve played a few of my favorite songs dozens of times on heavy rotation. I also like the band’s look which is very glam, sort of cabaret with a hint of the Egyptian. Mother Feather has played at various music venues in Williamsburg like the Knitting Factory, the Music Hall, and the Brooklyn Bowl. Damn, I just realized that I forgot to take a photo of the Music Hall!

My next goal was to visit a few bookstores. First I went to Spoonbill and Sugartown Booksellers on Bedford Avenue where I searched for a long time to find just the right book to buy. Eventually I found the theater section and a paperback copy of The Hot l Baltimore, a play by Lanford Wilson. After that I went to Book Thug Nation on North 3rd Street, across from Mast Brothers Chocolate. I could not find any plays there so I had to settle for Kafka Was the Rage: A Greenwich Village Memoir by Anatole Broyard. This is a memoir of New York City’s previous bohemia so it was an appropriate selection. 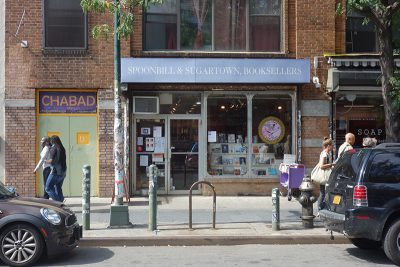 I didn’t do any more shopping after buying the books. I did stop in at the Artists and Fleas, an indoor flea market where various vendors sell homemade craft items, but I did not find anything to tempt me. I spent the next few hours wandering all around Williamsburg taking photos of establishments on my list; the Hall at MP, the Brooklyn Art Library, and the Brick Theater. I also visited the tiny museum, the City Reliquary Museum, which has an eclectic collection of New York City relics. It only cost $5.00 admission since the museum only fills two rooms.

I must have visited Artists and Fleas after the City Reliquary Museum because I also found the Smorgasburg, a Brooklyn flea food market, at the nearby East River State Park. I didn’t buy any food since I wasn’t hungry but I did pay $5.00 for a bubble tea because I was thirsty. I took some photos of the Manhattan skyline from the shore of the East River State Park. There were also many high rise condominiums in the area. I wasn’t really planning on going to the Smorgasburg but I’m glad I fit that in. 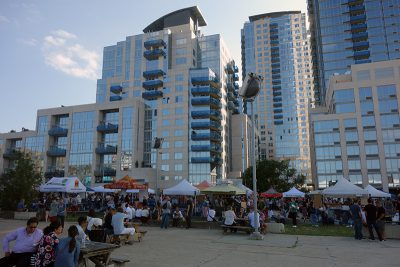 At that point I was getting pretty tired of walking in the hot sun so I found my way back to Bedford Avenue and walked west all the way to Broadway where I took some photos of the Williamsburg Bridge, Peter Luger Steak House, and the Williamsburgh Savings Bank. I also took some photos of the M and J trains as they went by on the elevated tracks to and from the Marcy Avenue Station. 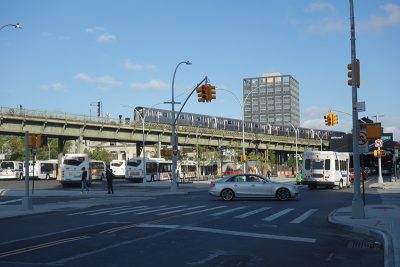 Instead of walking all the way back to Bedford Avenue to take the L train back to Manhattan, I went to the Marcy Avenue Station and wound up taking a J train back to Manhattan. The Marcy Avenue Station was featured in the Disney film, The Sorcerer’s Apprentice. Unfortunately I don’t have the J train in my notes and I didn’t even have my M train notes on my smartphone because I forgot to copy the latest version of my New York City notes to it. I have created a separate travel guide for Brooklyn which I’m currently working on. So when the J train crossed the Williamsburg Bridge into Manhattan I didn’t really know where to get off. Its final stop was Chambers Street which I knew would be far downtown. So I got off at the Bowery Station which was a good decision. This put me in the vicinity of the New Museum of Contemporary Art on the Bowery, so I took some photos of that. I knew McNally Jackson Books was in the area on Prince Street so I went there. This is one instance where my travel guide came in handy as I needed to consult my notes to find the book store. At McNally Jackson Books, I bought two plays; The Happiest Song Plays Last and Elliot A Soldier’s Fugue by Quiara Alegrí­a Hudes and Last Exit to Brooklyn by Hubert Selby Jr. I’d seen a worn out, used copy of this book at Book Thug Nation but I preferred a new copy.

I wasn’t quite sure where to find a subway station to take me uptown and thought I would have to walk clear across Manhattan to find one, but I quickly came across the Prince Street Station entrance for the N train which I took up to 42nd Street. I walked through Times Square which still has a lot of street construction going on and eventually made my way to 9th Avenue where I had pizza at Two Boots Pizza, between West 44th Street and West 45th Street. Two Boots Pizza has replaced Obao in Hell’s Kitchen as my favorite place for a quick bite that won’t be too expensive. I had a slice of the Night Tripper, which was really hot with some sort of green chili sauce on it. I had to buy a can of Pepsi in addition to a Peach Honest Tea since it burned my mouth. I won’t order that particular pizza again. Two Boots Pizza is a small place without a lot of seating but it never seems to get crowded, unlike Obao.

My exploration of Williamsburg Brooklyn was a great success and provided some fascinating insight into a real New York City neighborhood where creative people are making things happen. Unfortunately, the L train is going to be shut down for repairs for well over a year and this is expected to have a big impact on Williamsburg. It may even affect Bushwick which is the neighborhood to the east that is currently being colonized by artists. I plan to explore Bushwick next but probably not until next year. For the rest of the year I only have two trips planned, Gettysburg next month and then my major two weeks vacation in Los Angeles. I really can’t afford to make any more trips besides those two.

When the bus stopped at the Delaware Water Gap’s Pennsylvania Welcome Center, I heard about the explosion in Chelsea. Some of the passengers must have been able to get the news. Fortunately, that happened around 8:30 p.m. which was shortly after we left the city. I was not in the Chelsea area at all during the day. It is disconcerting that bombs are being placed in the quieter New York City neighborhoods.