I’ve been driving north to Tioga County so often that I’m no longer blogging about it. Usually I do the same thing on every trip. I go to Colton Point State Park and do some brief hiking to the lookouts for the vista views. Then I go to Leonard Harrison State Park and take some photos from its more lavish lookout. And finally I go to Wellsboro and buy a book at From My Shelf Books and maybe have lunch. On my last such trip I did discover another trail at Colton Point State Park, the Barbour Rock Trail, which is handicap accessible. That trail leads to yet another vista view.

However, on Saturday I found enough different things to do that it is worth a blog post. First I went on an Ole Covered Wagon Tour. I’ve heard about this but I did not know where the place was located. It happens to be very near Colton Point State Park off Route 6. I was able to make a reservation online. The summer classic tour is only $25.00. I arrived a half hour early and used their portable toilet located behind the Ole Covered Wagon Tour shack. That is worth mentioning because after a long drive or a two hour covered wagon ride you are going to need to go to the bathroom. There were a few bikers on the tour which wasn’t surprising because hordes of bikers can always be seen in Wellsboro. I think bikers just like the scenic drives in Pennsylvania. They really congregate in some of the tourist towns like Wellsboro, Jim Thorpe, and New Hope. 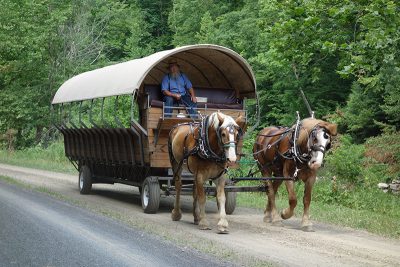 The covered wagon tour took two hours and went along the Pine Creek Rail Trail. That was the first time I’ve been down along Pine Creek. A few cars passed us on the trail and according to the tour guide this is allowed if you own a cabin on Pine Creek. We did see a deer which came down to the creek for a drink. The wagon stopped so we would have time to see the deer and take some photos. Everybody had to get off the wagon before it could turn around for the return trip. The tour guide had us pass around some photos from the lumbering era but I’ve seen many such photos before from my collection of local history books and travel guides. We also got to pass around some horse shoes and a nail.

After the tour was over, I drove back to Wellsboro and bought a book at From My Shelf Books. I bought Bodega Dreams by Ernesto Quinonez because it was on my New York City Amazon wish list. Then I went to Harland’s Family Style Restaurant for lunch. This place has escaped my attention because it is not located on Main Street. But I tend to drive pass it now that the From My Shelf Books store has moved. I ordered the Pine Creek Burger which came with fries. Service was a little slow but the restaurant was pretty nice, one of those old fashioned places that you can’t find anymore. 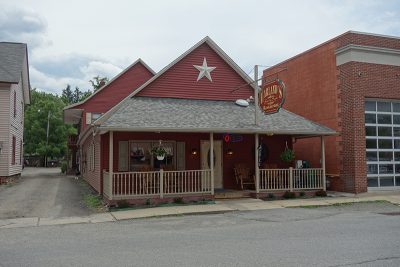 After lunch I drove to Hills Creek State Park using my GPS device. This state park was a bit difficult to find and my GPS had me driving along rural gravel roads until I was completely lost. But I did manage to find the state park. Actually I only got lost on the way back. Hills Creek State Park has a lake and a public beach but the hiking trails don’t seem particularly interesting. I parked at the Tauschers Trail trailhead and hiked through the pine plantations. I saw lots of cabins along the trail. Eventually I came out to the lake area and found the public beach. There was a refreshment stand where I bought an ice cream cone. There was a good sized crowd at the public beach and some people were having reunions at the pavilions. 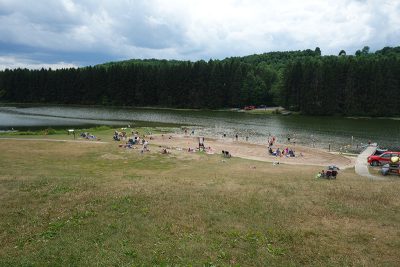 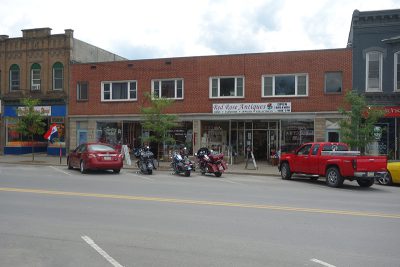 In conclusion, I did four new things on this trip to Tioga County:

I like driving north to the Pennsylvania Grand Canyon because it is a very scenic drive and it is the closest tourist destination for me.