Trip To NYC To See The Crucible

I saw another Broadway play yesterday, The Crucible by Arthur Miller. I’ve been seeing a lot of Off Broadway plays but for this trip I wanted to see something on Broadway, no matter what the cost. I didn’t particularly want to see The Crucible by Arthur Miller because I associate that play with boring English class material, but this production promised to be really creepy with horror film style special effects. This production of The Crucible is better than a trip through a haunted house!

Since the play did not begin until 2:00 p.m. I spent the morning in the vicinity of Union Square. There are several theater establishments in the Union Square area I wanted to find, even though I’ve explored the area before. I used my Metrocard to take the subway from the 49th Street station (outside Olive Garden in Times Square) downtown to the Union Square Station. I think I took an R train. One of the things I’ve finally figured out is that you don’t have to wait for a particular train. The N, Q, or R trains all take you to Union Square Station so just get on the first train that arrives regardless of its letter.

In the Union Square area I quickly located the Daryl Roth Theatre, the Lee Strasberg Theatre and Film Institute, Vineyard Theatre, and Irving Plaza. The Lee Strasberg Theatre and Film Institute was my inspiration for spending part of my day in Union Square. I’ve been reading several books on acting in order to understand the actor’s place in the theater community. You could say that theater exists for the sake of actors and not for the sake of drama as a form of literature. However, that is a cynical viewpoint and I have been pleasantly surprised to learn that many theater actors are actually intent on being great artists. I find that very encouraging. The theater actor uses his imagination to become the character, so the world of the imagination is very important to the actor. I have a powerful imagination which I can use to give illusions the force of reality so I can understand this aspect of their craft. However, there is a significant difference in that my imagination is not well suited to creating characters or a story. But a story is just a narrative applied to random events in order to give life meaning. I can appreciate the longing for meaning in life and creating a story gives life its significance. You could argue that a fictional narrative is not the true story or the truth of life, but human beings are incapable of understanding the world in any other way. Our scientific understanding of the universe actually goes against human nature and causes depression if taken too far. And as far as character goes, I can appreciate the desire to reach beyond the surface of relationships to really connect with another person by revealing deeper emotions, the hidden life of the deeper self. I’m interested in depth psychology even if I’m not interested in character as an abstract concept in and of itself. So given that understanding I think I can relate to actors. In any event, the entire world is entranced with the performance of actors, especially movie stars, and it is worthwhile to figure out why that is. Why do we worship these people as our new gods? There is an answer to this question.

There are also many book stores in the Union Square area so my secondary mission was to do some shopping. At the Alabaster Bookshop, a very small book store, I bought Five Plays by Anton Chekhov, translated by Marina Brodskaya. I’ve read all of Chekhov’s plays a long time ago but he is one of the most influential playwrights, probably only second to Shakespeare. I’ve forgotten what some of his plays are about and this has made it difficult to understand some of the frequent references to his work found in much of theater discussion. For example, all of the books on acting I’m reading mention Chekhov and Stanislavski. I think I can justify re-reading these plays in different translations. I also went to the Barnes & Noble store at Union Square and located their Drama section on the fourth floor. They had a large selection so I was tempted to buy many books but eventually I settled on John by Annie Baker and Vanya and Sonia and Masha and Spike by Christopher Durang. Both of these plays are set in Pennsylvania. 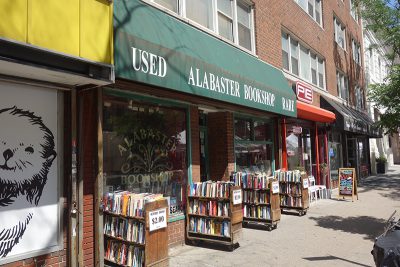 I had a list of establishments to locate and I managed to find every single one; Forbidden Planet, Classic Stage Company, The New School, and Quad Cinema. Near the Quad Cinema I came across the 13th Street Repertory Company which wasn’t on my list but I took a photo of that too. I also walked all the way to Gramercy Park and took photos of the Players Club and the statue of Shakespearean actor Edwin Booth. This statue is located in the middle of the park which is not open to the public so I took the photo through the iron gate using my camera’s zoom. 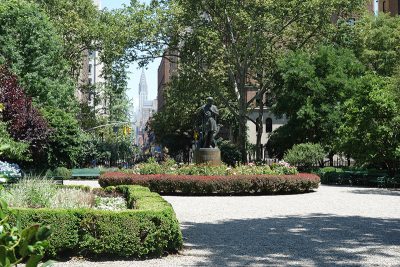 After finding everything I came to see, I returned to the Union Square Station and rushed back uptown to be in the vicinity of Broadway in time to see The Crucible. I got on a Q train and had to get off at 42nd Street since its next stop would have been 57th Street, too far uptown from where I wanted to be. As it was, I had to walk uptown 6 blocks to reach 48th Street. After taking some photos of the Walter Kerr Theatre, I wandered around the neighborhood looking for someplace to eat after the show. I found the Sombreo Mexican Restaurant on 48th Street and made a mental note to try that place. But I actually went to a Starbucks at the Worldwide Plaza where I had a large, iced coffee and a yogurt. 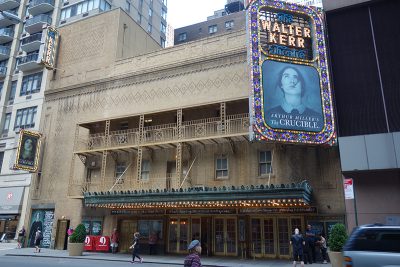 I have written a separate theater review of The Crucible in my previous blog post. I thought it would be funny to review the play as if it were a serious attempt to practice the dark arts. So here I will only mention a few details of the experience worth noting. First, the line to get into the theater was surprisingly long even though I arrived a half hour early. There was somebody at the head of the line to check bags but he only shone his flashlight into the bag without really examining the contents. I had a shopping bag of books and my small Pacsafe shoulder bag which I use if I’m not wearing a jacket with pockets for my stuff. After finding my seat, I located the men’s room which was located on the left and up a flight of stairs. The show ran for three hours so I wanted to empty my bladder. However I must have been so dehydrated that I didn’t find it possible to urinate at all.

I had a front row seat so I got a good view of Saoirse Ronan, the star of the show. She appears in all the advertising for the show. But I did recognize two other actors. Ciarán Hinds who plays the Deputy Governor Danforth looked familiar to me. He has appeared in many films, but none that I’ve seen so that is a bit strange. Wait a minute, he was in the film The Woman in Black and I probably remember him from that. Thomas Jay Ryan played Thomas Putnam and I recognized him from Travels With My Aunt by the Keen Company.

After the play was over I went immediately to the Sombreo Mexican Restaurant on 48th Street where I had a drink and a three course meal from the Pre-Fixe Dinner menu; garden salad, Chicken Fajitas, and Chocolate Mousse. I had to assemble the fajitas myself but at least I got to make them the way I like them. This meal cost me $50.00 so it was not cheap and too expensive for Mexican food. 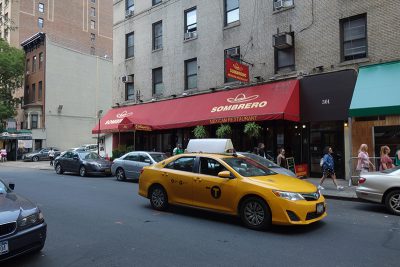 After dinner I walked all the way to Last Rites Gallery on West 38th Street, ten blocks downtown. This is the only art gallery in my custom travel guide and the only art gallery I wanted to visit. Last Rites Gallery specializes in gothic art and art that explores the darker side of our imagination. I saw the artwork of Henrik Uldalen, whose paintings remind me of the work of Francis Bacon, and paintings by Odd Nerdrum.

This trip serves to keep my theater mania at a high pitch. I want to feel mania bordering on a dark obsession to fuel my playwriting ambitions. On the other hand, I want to manage this mania so it does not consume me. After all the theater can be a harsh bitch. The theater treats everybody like a beggar and rejects the vast majority of her suitors. I have to keep reminding myself that I am feeding theater to my ravenous vision and it is my vision which truly fuels my mania. My imagination is awesome and self-sustaining, inspiration feeding into itself, but it does require an object. I wonder what theater artists would think if they knew what I was really doing?