Today I explored the city of Wilkes-Barre. I visited this city briefly three years ago but it has become a top priority since my older brother moved into that area. He now lives somewhere between Ricketts Glen State Park and Wilkes-Barre. So to reach Wilkes-Barre I drove along an alternative route on PA-118 East instead of using Interstate 80 East. I drove through Dallas PA and then used PA-309 South to reach downtown Wilkes-Barre.

I took 390 photos while walking around Wilkes-Barre. The reason I took so many photos is because it is hard to find any photos of this city. Nobody seems to be that interested in poor old Wilkes-Barre! I couldn’t even find decent photos of the college campus or landmark buildings. It is frustrating trying to plan a trip when you can’t find many photos of your destination. My 390 photos will be a bonanza for future explorers of Wilkes-Barre, assuming I take the time to title and tag all of my photos on Flickr. Wilkes-Barre has probably never seen such an avid tourist, taking photos of everything in sight.

The first order of business was to find someplace to park. On my previous trip I parked on the street and had to worry about feeding quarters into a meter. On this trip I found a big parking lot on South Pennsylvania Avenue where I could park all day for only $3.00. This put me in the vicinity of the Stegmaier Brewery building, the Jewelcor Building, and an abandoned railroad station so I took photos of all that. Unfortunately it was a bit cloudy throughout the morning but my new digital camera takes decent photos under low light conditions. 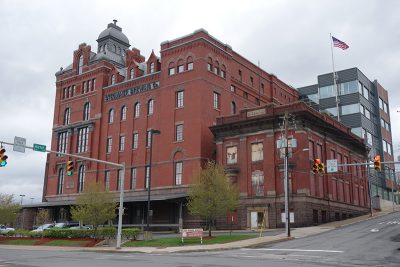 After that I proceeded towards Public Square and took photos of City Hall and Best Western Genetti hotel where the Oyster Restaurant is located. I took lots of photos around Public Square and then walked along South Main Street. I went pass Barnes & Noble, Boscov’s, Martz Trailways and then took a photo of the Wilkes University gate. I could not find a single decent photo of this university entrance gate online. You would think that surely somebody would have taken a photo of it. Not being able to find any photos taken in a city suggests to me that nobody finds your city the least little bit interesting. 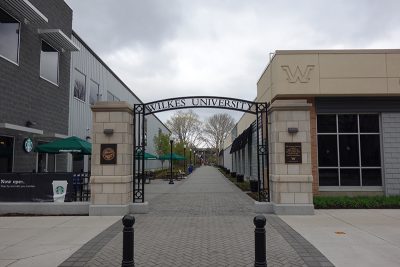 I took a few photos of Wilkes University properties but I did not wander too far onto their campus. However the campus is pretty much part of the downtown area so it is not like you are trespassing. One building I made sure to locate was the Dorothy Dickson Darte Center, the university’s performance art center.

Once back over the Market Street Bridge I took photos of the big hole left by the demolition of the Hotel Sterling. Then I walked through the campus of King’s College and found the Luzerne County Courthouse. I then walked back and fourth along River Street to take photos of many buildings fronting River Street. I should mention that I don’t mind this sort of activity because I love to look at old buildings with interesting architecture. Part of the appeal of travel is to see new places and notice details that would escape you if it was a familiar sight. I could sort of do this in Williamsport by walking down a familiar street and taking photos of what catches my photographer’s eye. 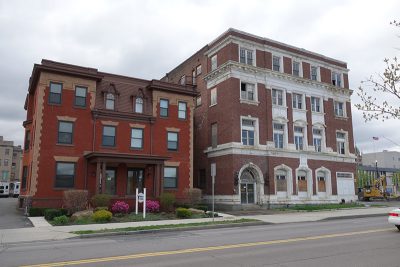 At this point I really needed to find a restroom so I walked to Barnes & Noble which was open by then. I had to ask for the key to the restroom although the lady from the information desk actually opened the Men’s room door for me. Their selection of theater books was thin so I bought Simon Stephens: A Working Diary (Theatre Makers). I’ve never heard of this British playwright because I don’t follow British theater as closely as American theater. However, I see that he wrote The Curious Incident of the Dog in the Night-Time which I’ve heard about, but which I don’t really know.

After buying a book at Barnes & Noble I picked up a copy of  The Weekender and Electric City, the free weekly entertainment tabloids. These provide valuable insight into the local culture. I returned to my car to drop off these purchases. From there I walked all the way to Hazle Street where I expected to find the manufacturing facility of Nardone Brothers Pizza. Unfortunately there was a fire at this bakery and the business never rebuilt this manufacturing facility. I found it all boarded up. It was a waste of time to walk that far but I did see an interesting abandoned factory which looked very creepy. 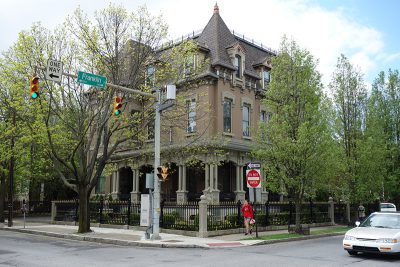 I then walked back into town and found the Frederick Stegmaier Mansion. From there I wandered around the Wilkes University campus some more and eventually found my way back to Public Square. I searched for a place to have lunch and found What the Fork, a small fast food place. The interior was kind of shabby, as if the establishment was still being constructed. I ordered a Bacon Burger and a Fountain Drink. At that point I was getting kind of tired of walking around Wilkes-Barre. The sun was not coming out so I was unlikely to take any better photos. I did buy a copy of the local newspaper, The Citizen’s Voice, before returning to my car.

It was still kind of early so I entered the GPS coordinates of the Wyoming Valley Mall into my GPS device and managed to drive to the Wyoming Valley Mall, although not exactly according to the instructions. The Wyoming Valley Mall is quite similar to our Lycoming Mall but it did not have a book store. I went to f.y.e. (for your entertainment) and bought a Blu-ray DVD of Tomorrowland for $29.67 which was kind of expensive. This was the movie I saw in San Francisco so it has some sentimental value for me. 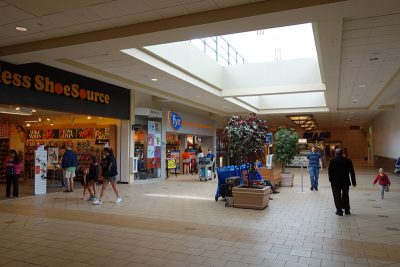 I bought the DVD at 12:56 p.m. so it was still kind of early to go home. I decided to squeeze in one more attraction, the Seven Tubs Natural Area. I entered the GPS coordinates into my GPS device. Fortunately, I had this in my notes. I managed to find the Seven Tubs Natural Area easily enough after a short drive. The Seven Tubs Natural Area is a gorge where a stream has cut deep into the sandstone to create many pools and waterfalls. It is yet another spectacular rock formation deep in the woods and well worth seeing. I wasn’t prepared for a long hike so I only climbed a short trail to see the various whirlpools. After that I was finally ready to go home. I took the usual route to Interstate 80 West.

This trip really advanced my knowledge of the Wilkes-Barre / Scranton metropolitan area. There are many possible reasons for me to visit this area so learning my way around is worthwhile. Although Wilkes-Barre isn’t a very famous city, it was interesting enough to wander around and that was more interesting than staying home to work on the computer.