The second day of the tour began with breakfast at Boudin Bakery. It was a buffet breakfast. I had orange juice, coffee, sausage, scrambled eggs, pineapple, and sourdough bread. After breakfast I had time to see the small museum and watched bread being made. I also walked outside a bit and took photos of the Musée Mécanique entrance, the Red and White Fleet ships, the Franciscan Crab Restaurant, Alito’s, and Fisherman’s Grotto.

After driving back over the Golden Gate Bridge we drove to the far west of the city to enter Golden Gate Park. This was more interesting to me because I never got this far west on my previous trip. I saw where the Sutro Baths were located and the Cliff House. I also got my first good look at the Pacific Ocean. In Golden Gate Park we drove pass the windmills, the bison paddock, and the beach chalet. I did not go that far west in the park on my previous trip. We stopped near the Music Concourse bandshell to use the restrooms. I saw some San Francisco Police Department cops on motorcycles ride up and down the steps to the bandshell. I’m not sure what they were doing; showing off for the tourists?, practicing their Dirty Harry chase skills? It seemed a little odd but I took some photos since everyone else felt free to take photos.

The bus then took us up the Twin Peaks where there was an excellent view of the city and the Sutro Tower. I don’t think you can get to the top of the peaks using public transportation so this was another unique benefit of the tour. I took some great photos of downtown San Francisco. 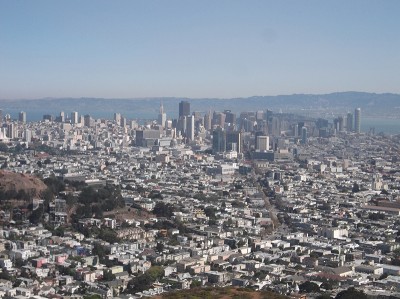 After the tour of the city was over a lot of the tour group took the option to see Muir Woods and Sausalito. We were dropped off at the Gray Line office near Fisherman’s Wharf. I had lunch at the nearby Hollywood Cafe while waiting for the 2:00 p.m. bus to Muir Woods. I had a Bacon, Lettuce, and Tomato sandwich with fries. The bus driver for the drive to Muir Woods acted as the tour guide. He was very outgoing and made a lot of jokes while driving and kept up a running commentary. He said he was from Honduras. The bus drove pass Ghirardelli Square and we went across the Golden Gate Bridge again and into Marin County.

Muir Woods didn’t offer much of a hike but the redwood trees were fantastic! The redwood trees, Sequoia, looked like giants compared to the second growth trees you see in Pennsylvania’s woods. Redwoods have existed since the Pleistocene and Jurassic geological epochs so the woods looked ancient. You almost expected to see dinosaurs. I took a lot of photos but some of them might be blurry because there wasn’t enough light. I made sure to look up to see just how tall these trees are. We had an hour and a half to explore the woods so I walked all the way to Bridge 4 and then walked back. So I saw the Founders Grove, the Cathedral Grove, and the Bohemian Grove. The gift shop did not have anything that I really wanted to but but I settled for a small book Muir Woods Meditations and a 3D bookmark. 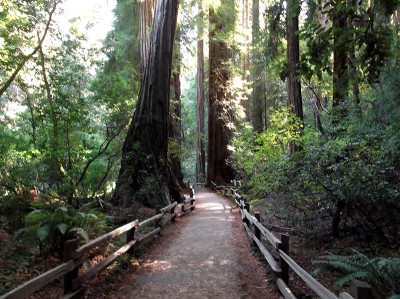 Before heading back to San Francisco we stopped for an hour in Sausalito, a small village with many fancy boutiques. I ate a Three Scoop Sundae at Lappert’s Ice Cream. Then I went into a gift shop where I found some drugstore items for sale. I bought a Pepto Bismol Liquid 4 oz for $10.99 and Pepcid Complete Acid Reducer + Antacid with Dual Action, Cool Mint, 25 Chewable Tablets for $19.99. This was some serious price gouging! Amazon sells that small bottle of Pepto Bismol for only $4.57 and the Pepcid Complete Acid Reducer should be only $9.44. I was extremely pissed by these high prices and decided to forbid any further casual purchases during my trip. After that, I was a lot more cautious in how I spent my money. The store was probably Sausalito Drug Store at 701 Bridgeway. I can tell by their Yelp reviews that they have a history of ripping off tourists. Well they just got one more negative review!