This week I made my second trip to San Francisco. I booked this trip, a packaged tour with Collette, because it included many excursions from San Francisco. This tour really only used San Francisco as a hub city to explore Northern California. I thought this trip was ideal because I got to see many things outside of the city which were described in the travel guides I read. All travel guides include recommended excursions but you usually have to rent a car to go exploring.

The first day of the tour was spent in airports and on planes. It often takes all day to fly from the East Coast to the West Coast. I missed my first early morning flight and had to rebook. I arrived at the airport just after boarding was completed for my flight so I cut it too close. I had a short flight to Philadelphia International Airport and then a longer flight to San Francisco International Airport. Once I arrived at San Francisco International Airport I found a super shuttle to take me to my hotel but I neglected to give them my transfer voucher so that cost me $17.00.

I met the tour guide in the hotel lobby and received some travel documents. She had reported me missing in action. I went to the front desk and got my room key after giving them my credit card. The hotel was the San Francisco Marriott Marquis on Mission Street in the heart of downtown. I had considered this hotel for my first trip, it is sort of a landmark, but it was too expensive. Hotel Mark Twain was fine except for its location, but the San Francisco Marriott Marquis was even better. I was charged $14.95 a day for Internet access which was outrageous. For three nights I paid $44.85 which is more than I pay for a month of Internet at home.

The watchband on my cheap wrist watch was almost split in two and I was in danger of losing my watch so I went to the Target store across the street from the hotel. This is the Target store in the Metreon shopping center. They did not have a very good selection of watches but I eventually settled for a Timex Ironman watch for $32.99.

The only thing we did on the first day was to have diner at Swiss Louis on Pier 39 at Fisherman’s Wharf. We all got on a Gray Line bus to be driven to Fisherman’s Wharf. Gray Line provided all the transportation for the trip. I can see on their web site that every excursion we went on is offered by Gray Line and could have been booked by myself.

I saw a Big Lebowski look-a-like in front of the Hard Rock Cafe and I managed to take a picture of him because he was busy taking a photo of someone else.

Swiss Louis was a nice restaurant with great views of Alcatraz Island and the Golden Gate Bridge off in the distance. The sunset was fantastic because the sun sets behind the Golden Gate Bridge. I had a salad, a bowl of clam chowder, and the Red Snapper Sautée plus two glasses of red wine. I shared a table with Philip and Gail Landers, a couple from Williamsport. They live in my neighborhood and Phil Landers taught accounting at WACC so I probably took one of his courses. He looked a little familiar.

After diner I had a little time to explore Pier 39. I found a great spot where you can photograph Telegraph Hill and the Coit Tower all light up for the evening. I also found the shops a little more interesting than on my previous trip. I bought a nice seashell at The Shell Cellar for $5.00 as a souvenir. 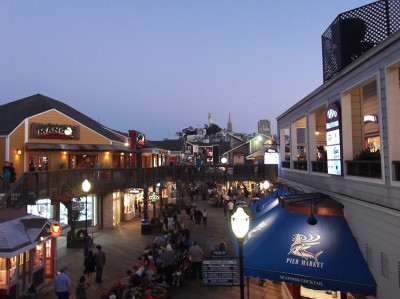 I almost forgot to mention what I was reading on my Kindle during the long flights and waits. I finished reading Little Brother by Cory Doctorow and had time to read the entire novel City Come A-Walkin’ by John Shirley. Both of those ebooks are science fiction novels set in San Francisco. City Come A-Walkin’ had a ridiculous premise but I actually liked it a lot.