Yesterday I made my second day long trip to Scranton PA. This trip proved to be more interesting than I expected. It has been three years since my last visit to Scranton and I don’t think I have fully explored the area. The Scranton / Wilkes-Barre metropolitan area is a large and influential community. I’m sort of familiar with the place names from watching Newswatch 16 back when I had cable TV. Newswatch 16 covers the entire north east and north central portion of Pennsylvania. I’m slightly reluctant to travel to Scranton because of the complex road network and traffic. It takes me two hours to drive to Scranton so it requires a bit of an effort.

I drove to Scranton without using my GPS because the directions are pretty simple. I parked at the Casey Garage on Lackawanna Avenue. It only cost me $5.00 to park from 10:00 a.m. to 1:30 p.m. One of the first things I did was to take a photo of the Casey Garage because it is important to document where you can park without getting a ticket or being towed. Taking photos was a major goal of my trip because it was a very cloudy day on my last trip and I did not get good photos. You also cannot find good photos of Scranton online since the city isn’t a popular tourist destination. Fortunately the day was bright and sunny with excellent lighting conditions for photography. One of the first landmarks I photographed was the Radisson Lackawanna Station Hotel which used to be the Delaware, Lackawanna and Western Railroad Station. I should have gone inside to see the impressive interior but I didn’t really have any business being there.

Next I wandered around Courthouse Square where a large number of statues, monuments, and landmark buildings are to be found. There were many large tents set up, possibly for the big La Festa Italiana festival which will take place next week over the Labor Day weekend. I made sure to take another photo of the Jason Miller bust. Jason Miller wrote a Pulitzer Prize winning play set in Scranton, That Championship Season. There are two different movie versions of the play available on DVD.

I walked down a few other streets in downtown Scranton, taking photos of anything that looked like it might be a landmark building. I will need these photos to expand and improve my notes on Scranton. For example, I took better photos of the Hotel Jermyn which is where several failed theaters have held their performances, most recently, the Vintage Theater which still has their sign over a door. And I took photos of the Pennsylvania Paper and Supply Company which was made famous by the television series, The Office. I enjoy pretending that the Dunder Mifflin Paper Company is a real company located in Scranton. My photos of the building used in the opening credits will be useful in making jokes about it.

Apparently a tire warehouse suffered a major fire in Scranton this week and the blackened ruins of the six story building are being torn down. This made for an impressive, apocalyptic sight. I took a lot of photos of this industrial ruin because it really makes for a good photo. This was totally unexpected and made the trip more worthwhile. One of my goals was to have lunch at Cooper’s Seafood House, the most famous restaurant in Scranton, which was even mentioned in a few episodes of The Office. Cooper’s is located just behind the tire warehouse so I was lucky they were open. I was able to get a great view of the warehouse from the edge of the Cooper’s parking lot where a small number of people were gawking at the smouldering ruins. 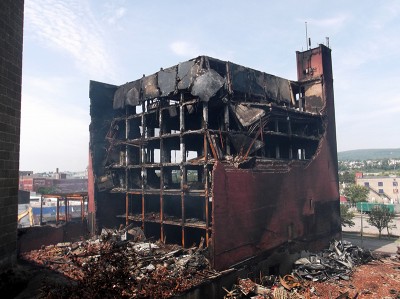 I ordered a Sangria drink, fish and chips, and a root beer for my lunch at Cooper’s Seafood House. As I was eating a Newswatch 16 television crew showed up and interviewed a member of the staff right in front of me. The interview was about the tire warehouse fire which forced the restaurant to close for awhile, but I wasn’t entirely sure what they were talking about at the time. It was thrilling to see a Newswatch 16 television crew during my trip to Scranton since their newscasts were part of the inspiration for my trip. This was the second thing that made this trip more interesting than I expected it to be. Cooper’s Seafood House is decorated with a lot of Scranton memorabilia and everything related to the sea, which is strange since Scranton is far from any sea. There was also a model train going around a train track just under the corners of the ceiling. I watched this train go around the room several times since it took forty minutes to get my order.

After lunch I walked back downtown to reach my next goal, Embassy Vinyl. I visited this record store on my previous trip and I was glad they were still in business. Scranton seems like a tough city for a business to survive in. For example, I noticed that Marquee Cinemas was gone. At Embassy Vinyl I bought two CDs at random, the Run Lola Run soundtrack and Zero One, some sort of electronica music. Then I went to the Mall at Steamtown to use the restroom and do more shopping. I was looking for the Fye store which sells DVDs and CDs but they were gone. I did stop in at the Library Express store where I bought a book, Thousand Cranes by Yasunari Kawabata, a Japanese writer and winner of the Nobel Prize for Literature. I’ve read his novel, Snow Country.

The second part of the trip required me to leave the parking garage and journey into one of the many surrounding neighborhoods of Scranton. There are many satellite towns in the Scranton area but getting to them requires a careful study of the streets to plan a route and then some thought on where you are going to park. I took the North Scranton Expressway to reach North Main Avenue in a neighborhood known as North Scranton or Providence. The major attraction there is the Houdini Museum but I was primarily interested in the Scranton Public Theatre. I parked behind the Houdini Museum in a small parking lot where you actually blocked in other cars. I arrived shortly after 1:30 p.m. which was a half hour late for the only show which began at 1:00 p.m. I did not know that there was only one show per day. Fortunately I only missed the film at the beginning of the tour and managed to catch most of the tour and the magic show.

The Houdini Museum is a curious institution to find in a shabby neighborhood of Scranton. The tour guide told us the story of how it came to be there. The museum was originally located in Manhattan until they were priced out of the city by none other than Donald Trump. This is interesting because I’ve heard that many other artists and people in the creative industries are being priced out of New York City. Scranton has been an economically depressed area for a long time. I think the city might actually be close to being bankrupt now. Anyway, you can find some very cheap property in Scranton and some artists relocate to Pennsylvania to find cheap studios, lucky for us. The point I want to make is that seeing a magic show in a typical suburban community is kind of surreal. It is the sort of carnival occurrence in your mundane surroundings which is only experienced in a dream. This was the third thing on my trip that made it exceptional. I was only expecting a mildly interesting trip. 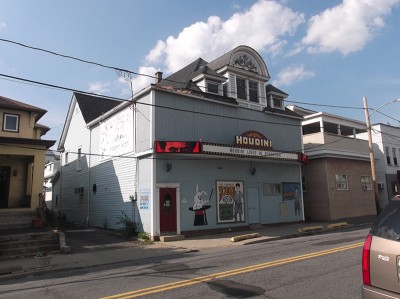 The magic show featured Dorothy Dietrich and John Bravo who also guided the tour of the two rooms filled with Houdini memorabilia. I’m not very interested in magic, but it was interesting from the perspective of entertainment industry history. I’m planning a trip to Los Angeles which requires me to become familiar with old Hollywood and the glory days of the film industry. Harry Houdini was part of that bygone world. I saw many vintage movie posters and entertainment industry memorabilia. The magic show itself was highly entertaining and quite intimate since the museum’s theater could only accommodate a small crowd. I enjoyed it as a kind of theater performance I rarely get to see. Actually I don’t think I’ve ever seen a professional magic show. It was also kind of old fashioned which reminds me of the steam punk aesthetic. Before I left I bought a book, The Secret Life Of Houdini, by William Kalush and Larry Sloman.

The only reason I visited the Houdini Museum was because it was in the vicinity of the Scranton Public Theatre. It has annoyed me that the Scranton Public Theatre doesn’t have a decent photo of their building online. It is hard to find an establishment if you don’t know what to look for. So one of the major goals of my trip was to take photos of the Olde Brick Theatre in North Scranton, which is where the Scranton Public Theatre does its performances. After parking in a closed strip mall parking lot I walked a long way along North Main Avenue to find the theater. I have to admit that it is lame to just take photos of theaters instead of going to a show, but it could prove useful later on. Along the way I encountered a picturesque corner formed by two old banks and a tiny parklet with a village clock. This seemed to be the heart of the old Providence neighborhood, town, suburb, or what? The Olde Brick Theatre was advertising a writer’s showcase which I read about later in the Electric City, a free local entertainment weekly. 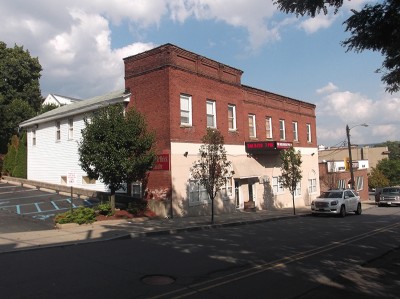 Before going home I stopped in at Main Ave Ice Cream for a large strawberry milkshake because I was dying of thirst. Every festive trip requires some ice cream to make the fun outing complete. I did have to turn on my GPS to find my way back out of the city and onto the harrowing Interstate 81 South.

In conclusion, this was a much better day than I expected. Scranton’s economic woes cause a lot of people to have a poor opinion of the city, but it can still be a great place to visit. I achieved my goal of expanding my knowledge of the region’s culture and I got some more practice navigating the infuriating road system. I should definitely visit Scranton more often. However, I probably won’t go back next week because the La Festa Italiana festival is going to make downtown crowded and it will ruin many photo opportunities.