On Saturday July 18, 2015 I continued my grand tour of Pennsylvania. I once again headed west and visited the Victorian town of Bellefonte. I’ve never been to Bellefonte before but the name is familiar because there are two exits to Interstate 80 from 180, the Bloomsburg exit to East 80 and the Bellefonte exit to West 80. It is slightly confusing because the town names are so similar, so actually visiting Bellefonte and Bloomsburg would help to create a clear distinction.

Bellefonte is mostly famous for its Victorian architecture. It has a few Victorian mansions which have been converted into bed and breakfasts and some Victorian commercial buildings that stretch for an entire block with room for many retail establishments. I did see a lot of empty store fronts so the town does not appear to be too prosperous. Bellefonte is in central Pennsylvania, far from Pittsburgh or Philadelphia, so it probably does not attract many tourists. It is close to State College so it may attract people attending Penn State games.

I parked beside Talleyrand Park. It rained briefly in the morning and the skies were cloudy so there wasn’t very many people going to the park. I saw the Talleyrand Gazebo, the Talleyrand Falls, and the High Street Bridge which was renamed Veterans Bridge. There was also a monument, Bellefonte Governors Memorial, to honor the seven Pennsylvania governors associated with the town of Bellefonte; William Bigler, William F. Packer, John Bigler, Robert J. Walker, Andrew Gregg Curtin, James A. Beaver, and Daniel H. Hastings.

I walked up High Street to the Centre County Courthouse but there was a small farmer’s market set up in front of the Andrew Gregg Curtin statue so I could not take a good photo of the courthouse. So I walked further up the hill to find the Union Cemetery which was completely deserted. I found the grave of Daniel H. Hastings, governor of Pennsylvania, and the grave of Evan Pugh, President of Pennsylvania State University. I did look for a circle of Civil War graves but I did not find it. 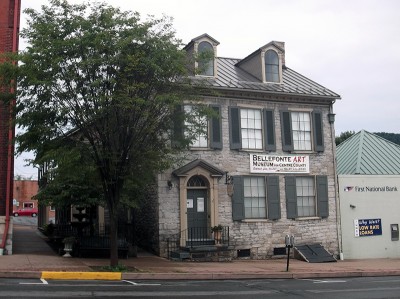 When I returned to the center of town I headed north on Allegheny Street and found the Bellefonte Art Museum, the Centre County Library, the Hastings Mansion, and the Reynolds Mansion. I was particularly careful to take a good photo of the Bellefonte Art Museum because I was unable to find a decent photo online. As soon as it was a little after 10:00 a.m. I returned downtown and went into the Plaza Centre to try to do a little shopping. The Plaza Centre is an antiques mall just like the ones I’ve seen in Lewisburg and the Poconos. Many dealers have booths or stalls in the mall filled with yard sale type junk. You rarely see anything worth buying. After wandering all over the shabby mall, the floors creaked, I finally settled for a Top 10 Boston (Eyewitness Travel Guide) book and a Playstation 2 game, True Crime Streets of LA. The final three major American cities I plan to visit are; Boston, Chicago, and Los Angeles.

I had lunch at The Governors’ Pub shortly after 11:00 a.m. when it opened. I was the only customer in the restaurant. It took me about an hour to eat lunch and at Noon I was still the only customer, a bad sign. I had the Robert Walker Reuben which is their specialty and home fries. The home fries were delicious with seasoning that made them very tasty. I don’t think I’ve ever had better fries. The Reuben sandwich was good but not something that I particularly enjoy. A Reuben sandwich is a hot sandwich composed of corned beef, Swiss cheese, sauerkraut, and Russian dressing, grilled between slices of rye bread. It made for a heavy meal. I had an ice cream sundae for dessert.

I returned to the Talleyrand Park to put more quarters in the parking meter and to put my purchases in the car. I was also on a mission to buy a copy of the Centre Daily Times so I went to a CVS Pharmacy behind the park and bought two local newspapers. I spent some time wandering around Talleyrand Park and I was tempted to leave but the sun finally came out so I decided to get take some more photos in the strong sunlight. When I walked back up High Street I found the farmer market stalls were gone so I was able to take some good photos of the Centre County Courthouse. I retraced my steps along Allegheny Street and got better photos of the Hastings Mansion and the Reynolds Mansion. I also walked a little further and found the two Victorian bed and breakfasts; Our Fair Lady and The Queen. I only checked the room rates for the Reynolds Mansion and they were surprisingly low for the lavish accommodations. You could get a fancy room for under $150 which is about the best price you’ll find anywhere. I’m tempted to stay at least one night at a bed and breakfast but it would be in the Poconos. I would like to stay the night at Jim Thorpe but there isn’t much to do in that town. The Deer Head Inn in Delaware Water Gap is another temptation. 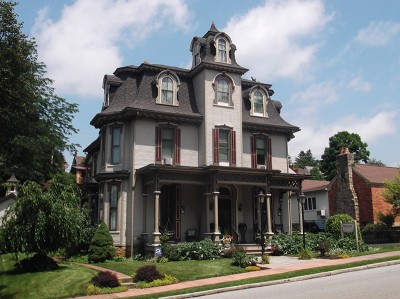 I did stay in Bellefonte just long enough to visit the Bellefonte Art Museum which opened at 1:00 p.m. This was a very small art museum but they did have one Picasso print. Unfortunately it was very hot and muggy out so I did not feel like spending a lot of time outdoors.

Before I went home I drove south on Route 550 to Route 150 and found the Barnes & Noble Booksellers book store near the Nittany Mall. I was hoping to find some Penn State books there but they had very few local interest books. I did buy The Mosquito Coast by Paul Theroux, Fodor’s Los Angeles, and the novel Stoner by John Williams, all books I’ve been looking for at other book stores.

Bellefonte is not far from Penn’s Cave, the major attraction in central Pennsylvania, so I decided to squeeze that into my trip. I’ve been to Penn’s Cave several times before but it is worth a repeat. Penn’s Cave is the only cave in America that you can go through in a boat. The price of a cave tour has gone up $1.00. I have the price in my notes as $16.50 but it is now $17.95. I was tempted to go on the Wildlife Tour too but I heard the cashier say the next Wildlife Tour was for 5:30 p.m. and that was several hours away. I did not want to hang around in the heat that long. I was able to go on the cave tour right away. Penn’s Cave was a bit crowded that day and I had to park on the grass at the overflow parking lot. This roadside attraction is way out in the middle of nowhere, in rural farmland, so it is surprising that so many people can find it. I passed several Amish buggies on Route 192. The cave was nice and cool. I didn’t have a jacket but my long sleeved shirt was good enough and I needed to cool off anyway. There was a lot of mist at the cave entrance and exit because it was hot and humid out. 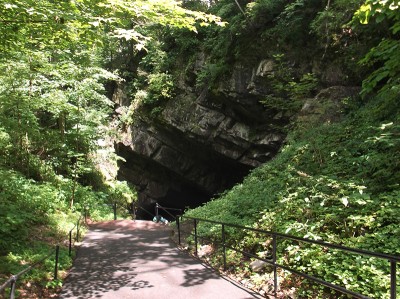