For my second full day in San Francisco my mission was to visit Chinatown and Japantown. This is probably as close as I will ever get to Asia. I would love to visit Japan some day, but not being able to read the writing at all is very intimidating. I think I would feel completely lost there.

I walked to Chinatown since I had seen how easy that was yesterday. I just had to walk north on Taylor Street and then east on Bush Street. Along the way I came across an elaborate French church, the Eglise Notre Dame des Victories, which I don’t remember being mentioned in any of the guide books. I also saw the Goethe-Institut on Bush Street.

I walked all the way to Grant Avenue but most of the stores in Chinatown had their security gates down so I had breakfast at Café de la Presse first. I ordered an espresso and two scrambled eggs with two slices of toast. I had my first encounter with the technology industry in San Francisco because the two men at the next table were discussing databases, MySQL and SQL Server. I eavesdropped on their conversation like a spy. 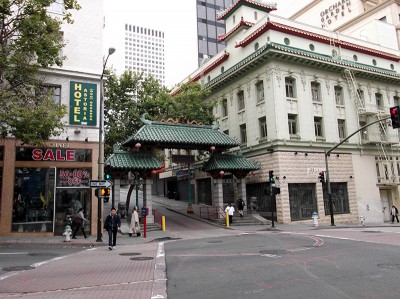 It was a little too early to be exploring Chinatown. All the stores were closed. I can tell by the timestamp of my digital photos that I arrived at the Chinatown Gate at 8:00 a.m., although my digital camera was still set for the Eastern Time Zone. Nevertheless I walked up Grant Avenue and located various buildings in Chinatown based on my Google Street View virtual tour of this street. Eventually I walked all the way to Columbus Avenue and then walked up that street to take photos of Hotel Bohème which I had missed the day before. I had considered staying at Hotel Bohème but their rooms seemed kind of small and shabby for what you are paying. It would have been more expensive than the Hotel Mark Twain for a dingy room. Only the location would have been an improvement.

I then walked to Union Square and waited until 11:00 for the R&G Lounge Restaurant to open. This restaurant is famous for its Dungeness crab but I did not see that on the lunch menu. I think I ordered the Barbecued Pork which was served with rice and a vegetable I’ve never seen before, bok choy or “Chinese cabbage”. The dining room was downstairs and they had forks on the tables so I didn’t have to use chopsticks.

When I walked through Chinatown again, more of the stores were finally open so I entered the Far East Flea Market hoping to find DVDs or some interesting bit of Chinese culture. I only found “Made in China” crap but I eventually settled for a beetle in lucite keychain.

I found the Chinese Historical Society of America but it wasn’t quite ready to open at Noon so I walked to the nearby Cable Car Museum. I wasn’t going to visit the Cable Car Museum at all but it is free. I bought what might be the best souvenir of my trip, a San Francisco HD Video Tour on Blu-ray DVD for $14.99. Although this video focuses too much on cable cars and the Golden Gate Bridge, it does have some vivid footage which almost transports you back to the city.

When I went back to the Chinese Historical Society of America the museum was open. It did not take very long to see the exhibits. I did see the Underground Chinatown exhibit, about a 1915 San Francisco World’s Fair attraction which presented the Chinese community in a false light.

I walked all the way back to my hotel and found the room had been cleaned in my absence. There was at least one day when my room was not freshened up. Although I had only planned on visiting Chinatown for the entire day, there wasn’t enough to do there so I decided to squeeze in a trip to Japantown. I walked up to Sutter Street and took the 3 Jackson MUNI bus to Japantown. I got off the bus at Laguna Street and immediately saw the Soto Zen Mission where Shunryu Suzuki was the chief priest, although this was just where the temple moved. I did take some photos of the original Bush Street Temple where Shunryu Suzuki actually taught Zen back in the 1960s. I’ve read several books on the San Francisco Zen Center so this was very interesting to me. There isn’t much to Japantown except for three interconnected shopping malls. The original neighborhood was destroyed when the Japanese were rounded up and sent to internment camps during World War II. But I actually preferred Japantown to Chinatown since the shopping was better. I entered the Japan Center mall and found Japan Video right away where I bought a DVD, Bushido: Cruel Code of the Samurai for $24.98. I have so many samurai movies that I wasn’t sure if I didn’t already own this DVD but fortunately I did not. I then found a cafe where I bought a bottle of orange juice because I was very thirsty. For some reason, I had a craving for orange juice on this trip and always bought that when it was available. I then searched through the malls until I found the Kinokuniya Bookstore where I spent considerable time trying to select the best book. Eventually I decided upon A History of Japan by R.H.P. Mason and J.G. Caiger published by Tuttle ISBN: 978-0-8048-2097-4. I don’t know anything about the history of Japan so this seemed to be the best introduction to their culture. 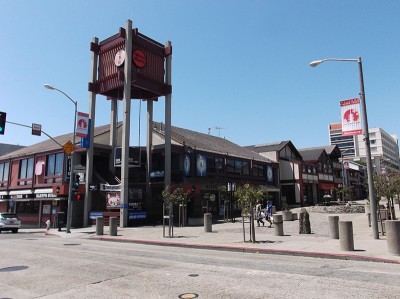 When I left the Japan Center mall I located another bookstore on the Buchanan Plaza, Forest Books. There I found a book by Gary Snyder, He Who Hunted Birds In His Father’s Village: The Dimensions of a Haida Myth. I had no idea what this book was about. Gary Snyder is one of the Beat poets whose work I have not read. According to Amazon it is a study of a single Native American myth.

Before leaving Japantown I walked around the area taking lots of photos. I could have visited the New People entertainment complex but I was getting tired so I decided that was enough for one day. I took the 3 Jackson MUNI bus back to Taylor Street.

At 7:00 that evening I had a reservation for a show at Biscuits and Blues, a music club not far from my hotel. This was one of the neatest things I did on this trip, since I often don’t get a chance to try any nightlife on my one day bus trips. Although the show seemed like a bargain at $20.00 that did not cover the food and drinks. I had to pay $20.00 cash at the door since my credit card was not actually charged for the online reservation. The hostess had to give an explanation for that. I ordered a Mississippi Tea Cocktail for $11.00, Nachoes with Guocomole for $14.00 and a basket of biscuits for $5.00. I ate the four biscuits first and was unable to finish the nachoes. The musical act was the Daniel Castro Band with special guest guitarist, Terry Hiatt. I’m not really into the blues but this was a real treat. The music was great! Daniel Castro and Terry Hiatt are real guitar virtuosos. It was like watching Jimmy Hendrix do his thing. They had a sense of humor and kept you guessing when the song was really over, with lots of false stops. They even showed a sense of humor when somebody in the audience complained that the music was too loud. The rest of the audience seemed shocked that somebody would complain. This is live music! It is supposed to be loud! After the show I bought a CD of their latest album, Desperate Rain. 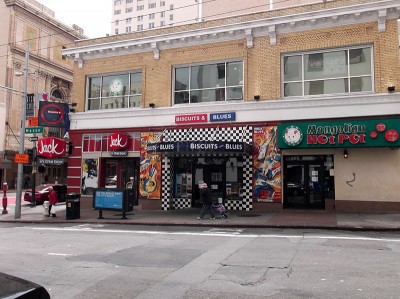 I rarely hear live music and this was my introduction to the blues so I thought this show was really something special. Travel offers an excellent opportunity for new experiences that will expand your horizons. San Francisco is a very multicultural city and I discovered a lot of new things on this trip.