For my first full day in San Francisco I wanted to visit North Beach. Being a bibliomaniac, I was eager to visit City Lights Bookstore and do some shopping. I tried to use Uber outside my hotel but I was harassed by a homeless person so I walked to the Hallidie Plaza and bought a single ride ticket for the cable car. A black man was singing next to where passengers get on the cable car. He was using an iPad to play his music. Even the buskers have gone high tech! I got off the cable car where it makes a turn in Chinatown, near the Cable Car Museum. I found Broadway Street and walked east until I found Columbus Avenue. I soon found Jack Kerouac Alley since it connects Chinatown’s Grant Avenue to Columbus Avenue.

At City Lights Bookstore I headed upstairs to find the Beat Literature and the Poetry sections. There was only one other tourist up there taking photos so I felt comfortable taking a photo as well. I bought four books because this book store has a great selection for anyone interested in serious literature.

It was hard to find the Kenneth Rexroth book since it was shelved in the basement under Asian Classics and not upstairs in the Poetry section. This trip has gotten me to read some poetry again, but I really prefer drama. 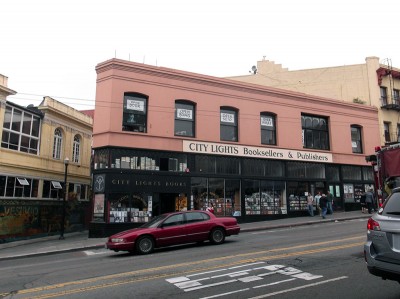 I found Caffè Trieste nearby which is also a famous Beat writer hangout. It did not look too busy or crowded so I stopped in for lunch. I had a grilled cheese sandwich and iced latte.

My next stop was the Beat Museum which is pretty interesting for a writer. I saw lots of typewriters. They also had a nice collection of paperback books on display in the museum. You could also buy rare books in the museum store. There was some material on Charles Bukowski. I don’t really consider him a Beat poet. He was more closely associated with Los Angeles. I sat in the museum’s little movie theater for quite a while, watching a good documentary on Jack Kerouac. Before leaving the museum, I bought a DVD, The Source, a Beat documentary which was very expensive considering it was burned onto a DVDR, and not a commercial DVD. I should have bought a rare book instead.

After that I walked up Columbus Avenue taking photos of all the North Beach landmarks. I saw lots of fire trucks near the Transamerica Pyramid so I got a few instances of fire engines in my photos to add interest to them. 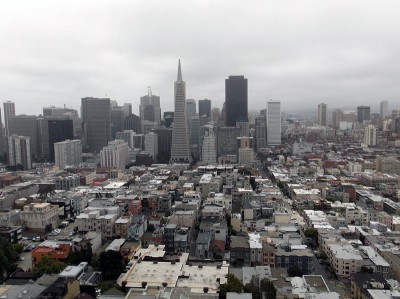 After visiting Coit Tower, I continued to walk up Columbus Avenue until I reached the San Francisco Marriott Fisherman’s Wharf hotel. This is where I’ll be staying on my second trip to San Francisco scheduled for September so I wanted to check out the neighborhood.

Instead of walking all the way back up Columbus Avenue, I took a MUNI bus. This was the first time I used my Clipper card. I was going to try Uber again but I found that my smartphone battery was too low to use my phone. Apparently the ReadySim SIM card had drained the battery with 3G data requests. This was unexpected since I usually don’t have a SIM card in my smartphone. I had to find Kenneth Rexroth Alley without my travel notes. Fortunately I managed to find the alley even though there is only a street sign to see.

I had lunch at Mona Lisa Ristorante. This restaurant wasn’t in my notes but it seemed convenient. I’m proud of the fact that I didn’t eat at the same restaurant once during my entire trip. I always went to a different restaurant. Usually I don’t consider this important so I can be very unadventurous in eating out. This must have been an authentic Italian restaurant because I heard someone speaking fluent Italian. I think I ordered Gamberoni con Cozze alla San Marino, prawns with mussels in pink sauce.

After lunch I walked down Kearny Street until I found the Chinese Cultural Center. From there I located Portsmouth Square Plaza and then Grant Avenue. I walked all the way down Grant Avenue to the Chinatown Gate, which was sort of a preview of Chinatown which I intended to explore the next day. I then walked east to Union Square where I found a lot of construction going on that partially ruined any photos I could take of this landmark.

Further walking led me to Biscuits and Blues, a music club where I had a reservation for Tuesday night and theaters on Geary Boulevard. 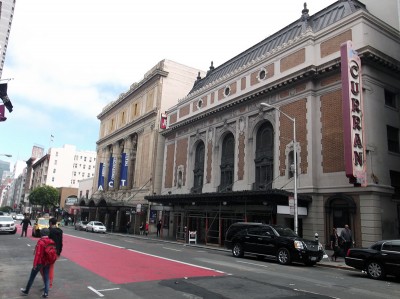 After a brief rest at the hotel I went back out and just walked a few blocks to locate the Bohemian Club, Alcazar Theater, Tides Theater, and San Francisco Playhouse. I didn’t waste much time in my hotel room on this trip. I was always out and about if only to take photos. I had dinner at Lori’s Diner which had some neat decor. They had an Edsel parked right in the diner and my table had a framed laserdisc of the film Gigi. I still own a laserdisc player and it amused to me to see a laserdisc used as a bit of nostalgic decor. I ordered a Moon Doggie (hot dog) and a coffee milkshake.

And that was how I spent my second day in San Francisco. Although I’m just a casual writer, it was thrilling to visit one of the most famous literary spots in the country. For this trip, I researched more writers for my notes than on any other trip. I’m always interested in the culture of any city I visit and San Francisco is particularly rich in culture.