I spent this weekend hiking to enjoy the outdoors now that the fall foliage is at its best. I plan to stop making weekend trips in November. I’m going to be very bored and depressed over winter. I plan to focus on four things this winter; study Dutch, research my Amsterdam trip, do some writing (SciFi novel and playwriting), and attend to financial matters (I need to make more money).

On Saturday I hiked the Loyalsock Trail from Mead Road to the Haystacks. This was only a section of the Loyalsock Trail. The entire trail is almost 60 miles long and would take several days to hike with overnight camping required. The section I hiked was remarkably easy and may become my favorite hiking spot. Most of the trail was along an old railroad grade (the railroad tracks were gone). That part of the trail was perfectly flat and made for easy walking. You do have to climb down to that part of the trail and then climb down to Loyalsock Creek to see the Haystacks, which means you have uphill climbs on the way back.

Walking along the Loyalsock Trail was very relaxing and enjoyable. It was basically a deserted road through the woods. Fall leaves covered the road bed and the aisle of trees were many shades of yellow. I did see some other hikers from time to time because this part of the trail is very popular. Eventually I reached Loyalsock Creek and saw the famous Haystacks. The haystacks are mound-like hard sandstone formations in the middle of the creek. Geologists don’t know how these rock formations were formed. I climbed onto the haystacks and took lots of photos. There were several pools in the haystacks and the rock was very strange, like cement polished into mounds of rock. I tried to use my smartphone to get my GPS coordinates but I couldn’t get a signal so I guess I may need a better GPS device to avoid getting lost in the woods. I did slip on the slippery rocks and fell flat on my back. Fortunately my backpack took the brunt of that fall and I had hand wipes and paper handkerchiefs to clean my hands. 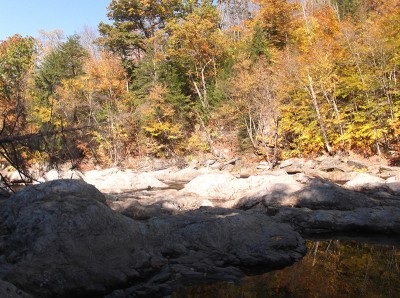 On my way to the Lycoming Mall, where I did a little shopping to reward myself, I stopped in at Katie’s Country Store. I didn’t find much of anything worth buying but eventually I settled for a bookmark. This was all located in Sullivan County to the east of Lycoming County. The only place I have visited in that county is Eagles Mere.

On Sunday my main goal was to attend the Fall Festival at the Little Pine State Park. But since that did not begin until noon, I drove to Lock Haven first. There was only one thing I wanted to see in Lock Haven and that was the Clinton County Community Center. The Clinton County Community Center is associated with STEP Inc, my employer. Although I have never been asked to go to this place, I figured I should know where it was and Google Maps was very imprecise on its exact location.

Before going to Little Pine State Park I stopped at McElhattan to follow up on my previous visit. I parked near Henry W. Shoemaker’s old estate, Restless Oaks, and took better photos of the old house by walking along the road. After that I went to the Restless Oaks Restaurant and found their gift shop, to the left of the cash register near the entrance. They had several books of folklore for sale but none of them were by Henry W. Shoemaker, which was kind of disappointing. Fortunately I got two more of his books in the mail on Saturday. I ordered breakfast at Restless Oaks Restaurant; coffee, an omelet with bacon, and an apple danish. The place seemed pretty busy. 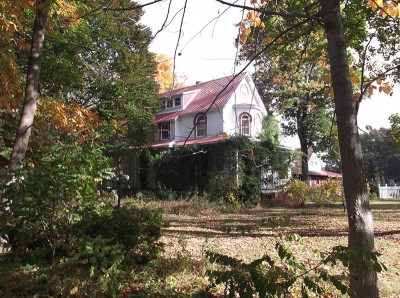 After breakfast I finally drove to Little Pine State Park and did some hiking until the Fall Festival started. I hiked the easier trails, the Carsontown Trail and the Bluebird Trail. Unfortunately I got my hiking shoes wet in a stream which seemed higher than on my previous trip so I had to change into my hiking boots. There were a lot of people in the park and some people were even using the shooting range so I heard several rifle shots. The Fall Festival was held at the main parking area near the lake. It was a small festival devoted to outdoor recreation so I didn’t find it very interesting. One picnic table had two aquariums containing a snake and a turtle. There was a large spread of Indian craft items in one of the pavilions. The most interesting sight was an old trapper wearing buck skin clothes. He had a lot of animal furs laid out on a table. This old trapper looked like an authentic mountain man. It did not look like this Fall Festival could provide enough amusement to last the afternoon so I decided to do some more hiking at Rider Park. 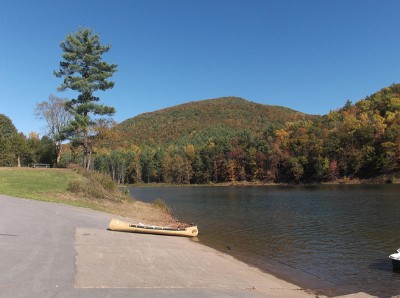 Before heading out to Rider Park I went home to get another pair of socks and my hiking poles. The drive to Rider Park went perfectly even though my driving directions require finding several rural roads. I even managed to follow these directions in reverse to make my way back home without taking a wrong turn anywhere, a minor miracle. At Rider Park I only hiked the easier trails, the Francis X. Kennedy Trail and the Cheryl’s Trail. It was interesting to see how the trails looked in the fall. Some of the ferns were brown and the late afternoon sun illuminated the yellow trees so they shined like gold. I hiked all the way to Charles Ludwig’s Homestead and then as far as Caleb’s Run Trail. I don’t know where that trail goes. Maybe it connects to the Loyalsock State Forest. Caleb’s Run Trail led me to a steep descent and I didn’t follow it too far because I don’t like uphill climbs. At the Doe Pen Vista I noticed that the sign identified Smith Knob far in the distance. Smith Knob is definitely on the Loyalsock Trail which has a Smith Knob Vista. Before leaving Rider Park, I took lots of photos of the Norman S. Wheeland Homestead because the stone basement ruins are the most interesting remains of a bygone era. There are many more state parks and hiking trails within a short drive from where I live but I feel like I’ve hiked enough. 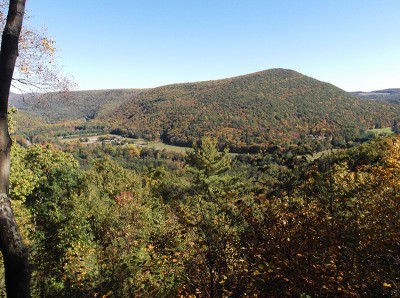 This will be my 529th blog post on my WordPress blog. As an aspiring writer, I’m glad I have written that much. I need to do some serious writing to produce something substantial because that is something I have always wanted to do.