The third day of my vacation in New York City began with breakfast at Applebees on West 42nd Street. We don’t have an Applebees in Williamsport but there is one in Lewisburg. I like West 42nd Street even though it is tacky. I ordered a breakfast sandwich with sausage which came on toast. I also had coffee and potatoes although I barely ate any potatoes. I rarely eat breakfast so I wasn’t looking for a foodie experience. My hotel room appeared to be cleaned early in the morning from around 8:00 a.m. to 9:00 a.m. so I made a mental note to be out of my room by then. After breakfast I climbed the TKTS ticket booth steps because I don’t remember if I’ve ever done that before.

My goal for this day was to visit the Lower East Side to take a tour at the Tenement Museum and buy a Raspberry Pi 4 at Tinkersphere. I also had a list of establishments to photograph that I had missed on previous trips to the Lower East Side. I took an F train downtown from Bryant Park to the Lower East Side’s 2nd Avenue Station and arrived around 9:24 a.m. I located the Marc Straus Gallery with some difficulty but it was closed. I had a second breakfast at Dudley’s but I only had a cup of coffee and a bowl of granola and yogurt with blueberries and strawberries. The bowl was larger than I expected! 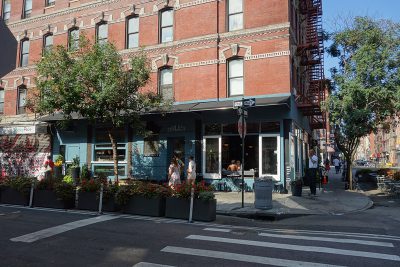 After that I walked far east on Grand Street to photograph the Abrons Arts Center. Along the way I passed massive apartment complexes like the Seward Park Housing, Seward Park Extension II, and off in the distance a residential skyscraper, One Manhattan Square. I also came across the Harry De Jur Playhouse next to the Abrons Arts Center and saw the Doughnut Plant. This neighborhood seemed a little gritty so I retraced my steps back to the center of the Lower East Side.

I located and photographed the entrance to Slipper Room which is next to Pizza Beach and hard to spot since it is just a door. I had completely failed to locate this establishment on a previous trip to the Lower East Side. I did find one art gallery open, Benjamin’s Art Gallery on Orchard Street. When I went inside I was greeted by a sales person who seemed more eager to chat up a customer than is usual for an art gallery. She showed me the work of Jeon Nak, a Korean artist who does lenticular lens paintings. This is a technique that makes images that appear to change or move as the image is viewed from different angles.

I found a new CVS store at 194 Orchard Street where I used a Santander ATM to withdraw another $80.00 from my checking account.

Tinkersphere did not open until noon so I walked far west on Delancey Street and found the Bowery Ballroom, a music venue I wanted to photograph because Mother Feather has played there. I walked up the Bowery street and saw the Germania Bank Building which is kind of famous for being in many punk rock photos. I went inside and found it was now home to Supreme, a skateboard clothing boutique. Next I thought I would find the MoMA Design store but I went west on Prince Street instead of Spring Street. Prince Street is directly opposite the New Museum. So I wound up walking past McNally Jackson Books and eventually reached the Prince Street Station at which time I knew something was up. From there I walked north on Broadway back to East Houston Street to eventually find Allen Street. Before going to Tinkersphere I went into Stop 1 Gourmet Deli and bought a small bottle of Starbucks Frappuccino because I was dying of thirst. At Tinkersphere I bought a Due R3 Arduino and a Raspberry Pi 4 (1 GB model). I haven’t really done anything with the Arduino or the Raspberry Pi but I plan to get into that over the winter.

After making that purchase I thought about heading back uptown to leave it at my hotel and get the print out for the Tenement Museum tour which I forgot. I even entered the subway, but as I waited for a train to show up, I began to worry that I would be cutting it too close so I left the subway. I found another deli store to buy something to drink because I was dying of thirst again. The weather was very hot for September and every day of my trip was hot. 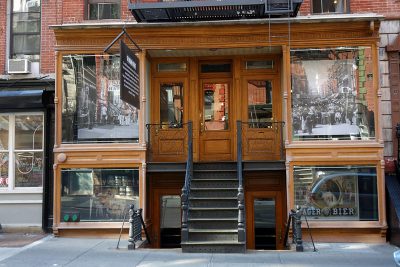 At the Tenement Museum I was scheduled to go on the Shop Life tour at 1:35 p.m. I got there about an hour early so I went to the checkout counter to get my ticket. Then I went downstairs to use the restroom and got a drink from a water fountain. I could not use their storage lockers because I did not have a quarter. I watched a 15 minute film and looked through the books in the gift shop. They were selling that New York Non-Stop A Photographic Album in the museum store! That book has a few of my photos in it. The Shop Life Tour did not leave at 1:35 p.m. because there was only two of us and two other people did not show up on time. I had to wait until 2:15 p.m. for another tour which had a different guide. For the Shop Life Tour we walked to 97 Orchard Street and entered a basement store which was once used as a German saloon. We were led to the cramped meeting room and kitchen behind the saloon. There was also a bedroom. From there we entered a room that was left in ruins and finally into a room with sophisticated flat screen tables. You could place an object on the table and read details about the merchants.

After the tour was over I looked for the I Need More punk clothing store but it was closed even though it should have been open. I didn’t feel like spending any more time in the Lower East Side so I took an F train uptown to the 47th-50th Streets – Rockefeller Center Station which brought me closer to my hotel than Bryant Park. 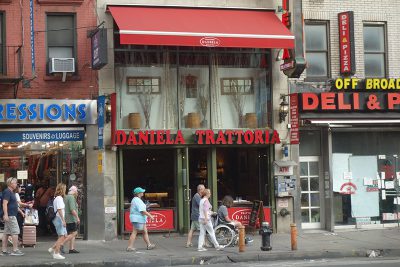 I had dinner at Daniela Trattoria on 8th Avenue. I had a reservation there for 5:00 p.m. I ordered the Chicken Scarpariello with lemon, white wine, sausage, vinegar peppers. There was only one sausage. I had tiramisu for dessert. The total was $58.36 with tip so that was a pretty expensive place to eat. Afterwards I walked down West 42 Street to photograph theaters. I saw Theater Row which had been renovated and I notice Stage 42 which is a theater I’ve overlooked until now. 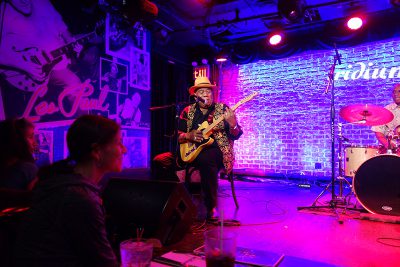 That evening I finally got to visit a Jazz club in New York City, something I could not do on a day trip. I chose to go to the Iridum Jazz Club because I’ve seen that place on just about every one of my trips to NYC. It is between Ellen’s Stardust Diner and the Winter Garden Theatre. The band I saw was the Harlem Blues Project. I would have preferred some Jazz but there were none scheduled that would have fit my schedule. Although I had a TicketWeb ticket they didn’t actually take it. I was given a white card instead. The stage was actually down a flight of stairs. I was seated pretty close the stage and in the center.  There was a two drink minimum so I ordered a Prosecco and a Mai Tai. The drinks came to $38.65. I paid $40.00 in cash and actually got $2.00 change back. The Harlem Blues Project was made up of four elderly black men. Three of them had guitars and one played drums. They appeared to be pretty laid back and friendly. Some of them worked for New York City in education. I’m not very familiar with Blues so I did not recognize any of the songs but they were quite soulful.