On the second day of my vacation in Richmond Virginia my sister drove me to the Virginia State Capitol for a free tour of this government complex on a hill in downtown Richmond. Richmond is the state capitol of Virginia. We had trouble finding street parking downtown so my sister eventually had to park in a public parking deck. After parking the car, we walked to the Capitol Square and took photos of various statues on the grounds. I found the Edgar Allan Poe Statue under the trees in the north west corner of Capitol Square. We couldn’t miss the Washington Monument. I also saw the Virginia Civil Rights Memorial and the Governor’s Mansion.

We used the Bank Street entrance which leads to an underground extension of the statehouse under the hill. While June used the restroom I browsed the gift shop. While we waited for the tour to begin, we looked at some costumes in a display case. A tour guide lead us through the modern underground lair, under the steps of the statehouse, and into the actual building which Thomas Jefferson designed. There was a statue of Thomas Jefferson in the stairwell. Once inside the building we entered a room with a large statue of George Washington. George Washington was born in Virginia so the state is very proud of our first President. After that we were led to the Old House and Old Senate chambers where we saw a model of the Capitol building and various historical paintings. Then we were led into the Old Senate Chamber room dominated by a large statue of Robert E. Lee standing with his hand on his sword hip, looking before him as if to say “Well lookie here”. We were told the story of how the third floor collapsed killing 62 people. Next we were allowed into the House Chamber where actual state legislative business is conducted. The tour guide mentioned that the 2012 film Lincoln was shot in this House Chamber room so I have since bought a DVD of that film. 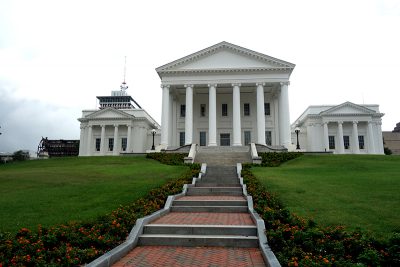 It cost June $30 for the parking garage since we were there for over two hours. She was indignant over the amount and I agreed to cover half of the cost. Next we went to the Science Museum of Virginia. We ate lunch in the car before entering the museum. At the Science Museum of Virginia June rushed to the special exhibit, Pompeii: The Immortal City which featured a few artifacts from the ancient doomed city and even two plaster casts of bodies. Then we went outside and saw the steam locomotive and the Aluminaut, the world’s first aluminum submarine. We also saw an IMAX movie, Volcanoes – The Fires of Creation, at 2:00 p.m. Before the film began, the screen was advertising other museum offerings and the Forge, a maker space, caught my eye. I was expecting this to be a workshop for open source hardware and Arduino electronics but it proved to be more material oriented for wood working and the like. The museum gift shop also disappointed me with its poor selection of science books and no maker books. The Science Museum of Virginia is really just a kiddie museum with no exhibits on hard science, computer science, or any serious stuff. After that we wandered around some more and found some aquariums for lizards, snakes, turtles, spiders, and other small critters. 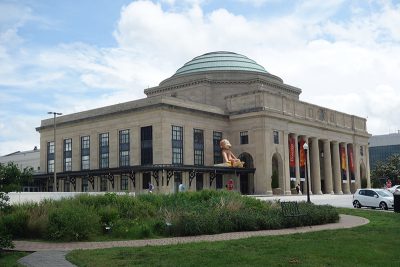 Next we drove to the Crossroads Art Center, a gallery for hundreds of artists where they can present and sell their work. This was like a free art museum with affordable art work. First I bought some Tums antacid tablets and Invisible Solid Powder Fresh anti-perspiration deodorant at a Bremo Pharmacy next door. At the Crossroads Art Center I bought a Byrd Richmond International Film Festival art print for $35.00 and a bunny card for $4.00, ZouZou’s Basement. We browsed the West End Antiques Mall next door which looked more like an interior designer’s showroom. Curiously there was a cafe in the store, Lulabelle’s Cafe.