Yesterday I went on a rare bus trip to Philadelphia which including seeing a play in the afternoon. Although I make such trips frequently to New York City, it is rarely that I can do the same for Philadelphia. Susquehanna Trailways rarely offers trips to Philadelphia for a day on your own. And I was just lucky that there was show I could see as a Saturday Matinee.

The bus dropped up us off at the Pennsylvania Convention Center. I saw a few homeless people camping out there in the tunnel formed over 12th Street. I walked along Arch Street until I reached City Hall where I took photos of many of the statues in the area, including the statue of John Wanamaker, Citizen. Then I walked down South Broad Street which is also known as the Avenue of the Arts due to the many theaters along that street. My first goal was to take some photos of a new mural outside the Drake Hotel which now houses many performance spaces.  The signs read Louis Bluver Theatre at the Drake and the Proscenium Theatre at the Drake. I really should try to see something at the Drake theaters but that would require an overnight trip. 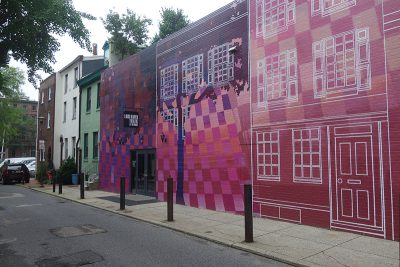 Louis Bluver Theatre at the Drake

My second goal was to visit an art gallery which I had overlooked on all previous trips, the Philadelphia Art Alliance. Located in the Rittenhouse Square neighborhood, this arts institution has an art gallery open to the public on its first floor. The front door would not open for me and I almost walked away but somebody came out of the building to invite me in. I guess the front door is just really hard to open. Unfortunately, there was practically nothing to see there. The Uniting Two Legacies exhibit did not feature any artifacts or artwork. All there was to see was information panels such as you find in museums. It would have been really lame but the material was kind of interesting. It just would have been better as a pamphlet. 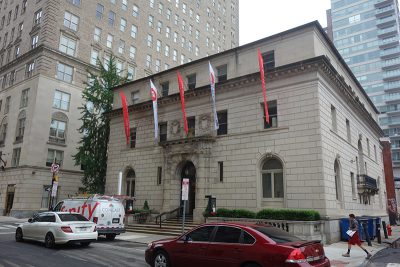 Naturally I checked out Rittenhouse Square which resembles one of the smaller New York City parks. I was considering trying the Parc restaurant but all of the outside tables were full and the place looked really crowded. This kind of surprised me because it was not a nice day. It rained that morning and it was still very cloudy and gloomy. I carried my umbrella with me but it turned out that I never really needed it on this trip. It certainly did look like it might rain again, but it never did.

Next I went to Joseph Fox Bookshop which is not far from Rittenhouse Square. I could have gone to Barnes & Noble right on Rittenhouse Square but I decided to support this independent bookstore instead because they seem devoted to fine literature. I could not find any books on the theater or plays so I bought The Book of Imaginary Beings by Jorge Luis Borges. According to my reading database I actually read this book a long time ago but I remember nothing about it.

From there I quickly found the Macy’s department store which used to be the famous Wanamaker’s department store. Inside I saw the giant bronze eagle in the Grand Court which inspired the phrase “Meet You at The Eagle”. I also saw the “Wanamaker Organ”, the largest fully operational pipe organ in the world which was playing something. This was something I had read about in my travel guides but never bothered to see on previous trips. When I left Macy’s I encountered a parade which had begun. I didn’t know what this parade was for at the time but it was the Philadelphia Juneteenth Musicfest & Parade. Because of the parade some streets were blocked off by police cars or garbage trucks but this actually made it easier for me to cross some streets as a pedestrian.

I was getting nervous about missing my play so I located the Lantern Theater Company on 10th Street and Ludlow Street. I thought the theater was located within St. Stephen’s Episcopal Church but it is actually located towards the rear of the church and the entrance was on the side street beside the church. I had over an hour before the play began so I decided to go to the Reading Terminal Market to try to find something to eat. I had to cross the parade route to get there. Unfortunately the Reading Terminal Market was really crowded and I didn’t want to wait in line for my food or wait a long time to be served. I did use the restroom and got a cup of ice cream from Bassett’s Ice Cream. I returned to the Lantern Theater Company but it was still too early for the play so I walked down 10th Street to Walnut Street and took some photos of the Walnut Street Theater. 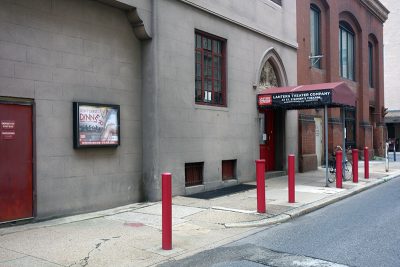 The play I saw at the Lantern Theater Company was called “Don’t Dress for Dinner”, a French farce. It resembled the sort of play you would see at a dinner theater or summer stock theater. Ordinarily I would prefer something a little more daring but I did appreciate that this play was unabashedly heterosexual. Unfortunately theater has become so overwhelmed by social justice warriors that you can hardly find a play that does not celebrate homosexuality or at least condemn traditional gender roles. Not that I hate homosexuals in the theater, but it gets a little old when every play has to be a didactic political statement promoting gender diversity. It has gotten so bad that watching a play where all the characters are straight and not making any apologies for it is a breath of fresh air. Maybe the Lantern Theater Company is more conservative in their play selection than other Philadelphia theaters. I enjoyed this play and found it to be very funny. The stage set required five doors to allow for all the entrances and exists into various rooms. A farce really needs a lot of doors. Towards the end of the play all the actors were dressed in pajamas or negligees which was a little racy. I was greeted with a Bonjour as I took my seat which I thought was a little pretentious until I remembered that this was a French farce. They played some interesting French pop songs from the 1960s before the play began. I noticed that my program had a crease down the middle so I swapped it with the program lying on a seat next to me. I like to keep theater programs as a souvenir. 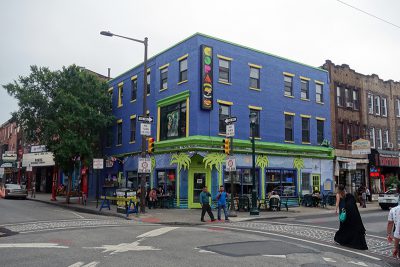 After the play was over I walked to Washington Square and took a photo of the Tomb of the Unknown Revolutionary War Soldier. Then I walked several blocks south to South Street. I was planning on doing a bit of shopping and eat at a restaurant along this street but I didn’t really have enough time to check everything out. I only managed to do a little browsing in the Eyes Gallery . Then I went to Copabanana where I ordered a cheeseburger and a margarita. I ate the cheeseburger as fast as possible, in like 20 minutes, because I was getting worried about missing my bus. It was a long walk back to Arch Street and 12th Street. I gave myself 40 minutes for the walk and left Copabanana at 5:20 p.m. While walking back to Arch Street I did take some photos of the Strange and Unusual store which I did not have time to enter, Repo Records which had moved, and the Philadelphia Bourse and Wyndham Hotel. I did not take many photos along Arch Street because I really had to hustle to make it to the bus pickup on time. As it was I got there 10 minutes before 6:00 p.m. but I was the last person on the bus.

Instead of heading directly for the Pennsylvania Turnpike, the bus took us far into Northern Philadelphia for some strange reason. At first I thought the bus driver was trying to take us through the notorious Kensington neighborhood, maybe to scare the passengers into not putting him through this trip again, but I think we only rode through the Fishtown neighborhood which is rapidly gentrifying. It was a bleak area but I still saw some interesting architecture. We stopped at the Allentown Service Plaza on the way home where I got a cup of coffee at Starbucks.

The weather could have been better but this was a very successful trip. It had been two years since I had last visited Philadelphia. I spent two weeks before the trip updating my travel guide notes on the city. I only had seven hours in the city and two hours were taken up by the play so I was feeling very rushed to meet my goals, but I managed to see most of what I had planned to see.