By Wednesday I had truly run out of ideas on what to do in Boston so I decided to do something far down on my list which I had not even scheduled. I decided to visit the Forest Hills Cemetery which was mentioned in some of the travel guides I had read. I took the Silver Line bus to South Station where I transferred to the Red Line. I got off at Downtown Crossing where I transferred to the Orange Line. I rode the Orange Line all the way to the last stop in Forest Hills.

I managed to find the grave of the playwright Eugene O’Neill. Just before I found it, a lost driver asked me for directions. He did not know anything about Eugene O’Neill. I mentioned that he won the Nobel Prize. 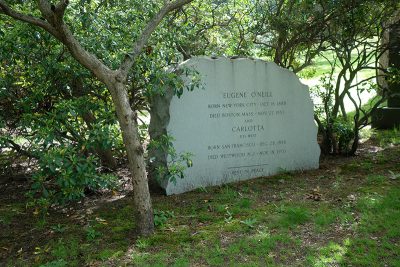 Next I attempted to locate the grave of poet E. E. Cummings but this proved to be extraordinarily difficult. I almost gave up on it. Eventually I found the right area by looking at a photo in the brochure. His gravestone was buried flat in the ground. There was a small collection of pens and pebbles on the flat marker so I was sure I had the right one. 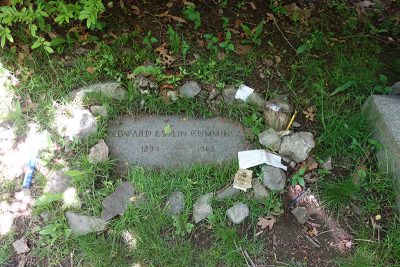 Finally I located the grave of Anne Sexton which was located far to the south of the cemetery on a hill with concentric circles of graves. Along the way there I encountered a dead fish which was rather ominous. The dead fish looked half eaten, like something a bear had been chewing on. It was a fair-sized fish about the size of a trout. I took a photo of it. Anne Sexton had a flat marker but her name was also on the Sexton family monument. Unfortunately I did not bring any flowers or poems to leave on the graves. Anne Sexton is one of my favorite poets. I have a small collection of books on her poetry and I’ve read her biography. In preparation for my trip, I finally read The Fading Smile by Peter Davison, a book about her generation of Boston poets. 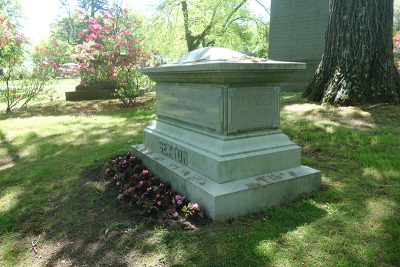 I only rested at the hotel for about half an hour before the maids showed up to clean rooms at around 1:38 p.m.

I took the Red Line to Kendall Square in Cambridge. First I went to the List Visual Arts Center where I saw a few large paintings and a huge art video. I took more photos of the MIT Dome in strong sunlight. Then I went to Miracle of Science where I ordered a cheeseburger and an IPA beer. At the nearby MIT Press book store I bought the book Deep Learning by Ian Goodfellow, Yoshua Bengio, and Aaron Courville. I spent a lot of time searching for just the right book since they had a good selection that suited my many interests, but eventually I decided this book would be the most significant one I could buy at MIT. I may have been slightly drunk from the beer I drank. Finally I located and photographed the Akamai building, one of the technology companies I had researched. 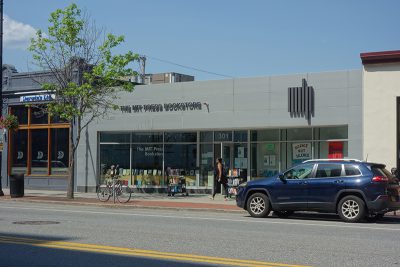 I then took the Red Line back to the Seaport District where I photographed the Institute of Contemporary Art in strong afternoon sunlight.

At 7:15 p.m. went to CVS and bought Arthriten, Harpo Happy Cola gummies, Monster Java, Callus Cushions, and Dr. Scholl’s Callus Cushions. All that walking had left many blisters on my feet. I really should have bought new padded socks for this trip. Only a constant intake of aspirin and Arthriten kept me on my feet.