I had breakfast at Caffe Nero again and this time I got a new loyalty card. I took the Silver Line bus to South Station and got out at South Station. I took photos of both sides of South Street which had a traffic jam. Lots of delivery trucks were blocking the establishments, making it difficult to get a good photo. I also took photos of the Chinatown Gate and then a few more Chinatown establishments. I walked all the way up Washington Street to the Park Street Station where I took a Green Line train to Boston University. I took photos of the Marsh Chapel, but the BU Castle was draped in red plastic for renovations. I wound up walking all the way down to Kenmore Square where I photographed the Citgo Sign and the Buckminster Hotel. As I was walking west on Commonwealth Avenue it began to rain but not too hard, just a light sprinkle. I found the Boston Playwright’s Theatre but my digital camera began to act up again and I could not zoom. Later on in my hotel room I think I figured out how to solve this problem. Hold down the shutter button as you turn the camera on. I took the Green Line train all the way back to the Park Street Station and transferred to the Red Line to return back to my hotel. They were cleaning the rooms so I quickly got my umbrella, took a few pills, and headed back out. 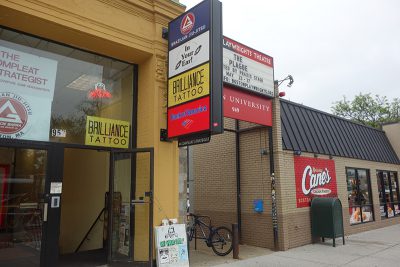 I took the Silver Line bus to South Station and then transferred to a Red Line train heading towards Ashmont / Braintree and got off at the Broadway station. There was some new construction of condominiums going on there. I crossed the bridge over the train tracks and then the highway underpass. It looks like Quinzani’s Bakery was torn down and some more high rise residential tower may be built there. Anyway, I found Thayer Street and entered a few art galleries. Lanoue Gallery was the first gallery I visited where I saw artwork by Marc Harrold and Laura Schiff Bean. I also picked up a SOWA guide book. I visited Gallery Kayafas where I saw work by Christine Collins and Joe Johnson. At SOWA Artists’ Studios I just picked up some postcards. I also visited the M Fine Arts Galerie which was showing the work of Robert Baart. And I visited the International Poster Gallery. 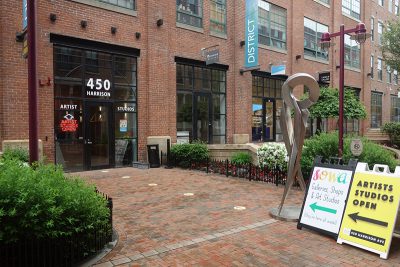 I had lunch at Ali Baba Restaurant where I ordered the Kofte Kebab – char grilled Turkish meatballs, served with rice, salad, and homemade bread. Service was extremely bad in this restaurant and I had to get a bottle of coke myself after waiting forever for it. The food also took a long time to prepare but it was extremely good. I ate all three huge meatballs and a good bit of the rice. After lunch I returned to my hotel.

At 4:30 p.m. I went across the street and saw Deadpool 2 at the Showplace Icon Theatre. This was a superior movie experience. The seats were like padded armchairs or your living room recliner, and the audio system was true surround sound with deep bass. 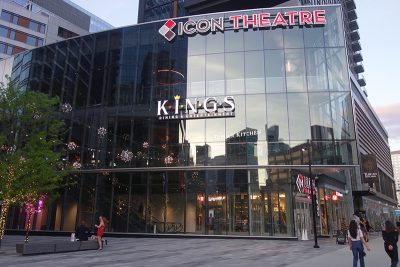 At 8:00 p.m. went to Bastille Kitchen were I ordered a glass of Harpoon IPA beer and Parisian Gnocchi – morel mushrooms, fromage blanc, shaved black truffles. This proved to be a very small dish so I also had desert, passion fruit sorbet. That cost me $40.00 with tip and I paid by cash. 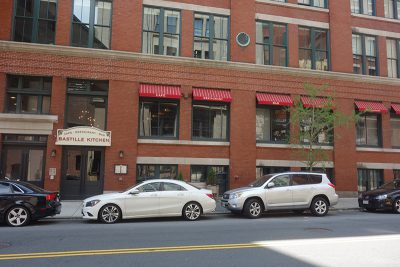