On Friday I explored the Back Bay. I left for the Prudential Center at 9:00 a.m. and got there at 9:30 a.m. I saw the Barnes & Noble store at The Shops at Prudential Center and then followed signs to find the Skywalk Observatory which was down some escalators to an elevator bank. The elevators were not working until 5 minutes after 10:00 a.m. Once I reached the observation deck I took lots of photos in all four directions. There was a hotel skyscraper being constructed right next to the Prudential Tower. When I was finished up there, getting back down to the correct floor was a little confusing since I was alone in the elevator. I had to press B for the basement. 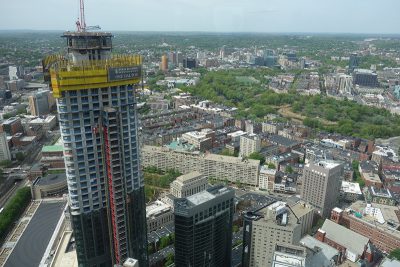 I located the Bukowski Tavern which I walked pass on the way to the Mary Baker Eddy Library. I got there at 11:10 a.m. but the next tour was not until 12:00 p.m. so I bought a tour ticket and then walked to the Huntington Theatre Company and got my ticket to Top Girls. I did not get my ticket in the mail before I left for Boston. Come to think of it, it was not in the mail held for me by the post office. I returned to Mary Baker Eddy Library for the tour of the Mapparium. We were not allowed to take any photos inside the Mapparium. The Mother Church was being renovated so I could not take any good photos of the church and its dome. I don’t know much about Christian Science but it seems to be based on the healing power of Christian faith which makes it somewhat shamanistic. Spirituality is often linked to healing although the benefits may be mostly psychological.

After the tour was over I went to the Bukowski Tavern where I drank two bottles of Mangers (Irish apple cider) and ate a Chili Cheese Mad Dog, topped with 3 bean chili and shredded cheddar cheese on a buttered and toasted New England style bun. I’m not sure how Charles Bukowski is associated with Boston. It is not like he ever taught at Harvard. 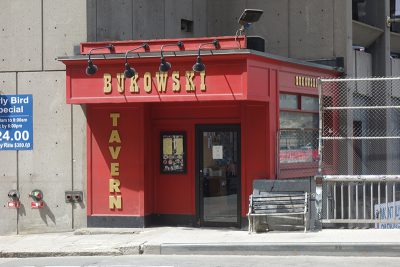 After eating I walked down Newbury Street but I began one block past Newbury Comics and Trident Booksellers so I missed them. I did come across the Guild of Boston Artists gallery where I saw a lot of mediocre paintings on sale for thousands of dollars. It made me think about doing a little painting myself. I would like to get that kind of money for my creative work. 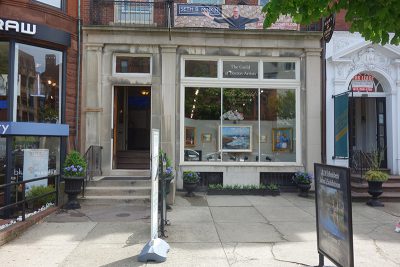 The Guild of Boston Artists 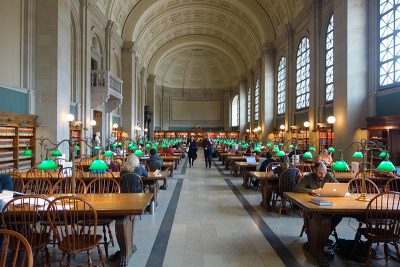 After that I walked all the way to the Public Garden and photographed every statue I could find. I even got a few photos of a squirrel. That was more than enough walking for one day so I took the Red Line back to South Station, and then the Silver Line back to the Seaport District. 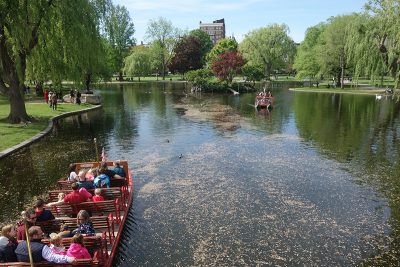 That evening I took the Green Line to the Symphony Station. I left around 6:50 p.m. and almost did not get to the Huntington Theatre Company in time to see the play Top Girls. I actually got there at 7:37 p.m. and had plenty of time because the show started at 8:00 p.m. Top Girls is a 1982 play by British playwright Caryl Churchill. I have read this play and was thrilled by the prospect of seeing it performed. This play featured an all female cast just like The Women Who Mapped The Stars. I was never entirely clear on the message of this play but the program notes explained how capitalism encourages women to become competitive and to do nothing for the stupid, weak, and helpless. The career girl Marlene has left her daughter Angie in the care of her sister Joyce. Angie is not very bright and probably does not have much of a future in Thatcher’s United Kingdom. So the play is pondering women’s adoption of the dominance hierarchy as if this were the masculine perspective. 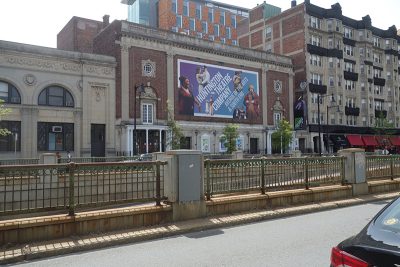 I thought the production was marred by excessively non-traditional casting. The characters in the same family were all of different races which destroyed any illusion of a family. There was no explanation in the play for this. The actress playing Angie was overweight and seemed too old for the role, as well as not being the same race as her mother. This was yet another example of casting that is meant to draw attention to itself, to seem virtuous to the champions of diversity, at the expense of the play and its artistic needs. However the kitchen sink stage design at the end was very convincing and made me feel like I was spying on a real residence.