I began the fifth day of my vacation with a complimentary breakfast at my hotel. Today they served omelets, French toast sticks, and Canadian bacon. I then went to the Walgreens on State Street but their ATM was not working so I went to Walgreens on Monroe Street and withdrew $80.00 at 9:58 a.m. I did not use my credit card much on this trip. I paid cash everywhere and wound up with a lot of change.

My main goal this day was to visit the Museum of Contemporary Art. I took the Red Line subway in the direction of Howards to the Chicago Station. I then walked four blocks east on Chicago Avenue to reach the museum. Along the way I saw the Chicago Water Tower and the Water Works Pumping Station. The first thing you notice upon entering the Museum of Contemporary Art is a huge skeleton of a cat, Felix by Maurizio Cattelan. It looks like a dinosaur skeleton at the Field Museum, serving as a witty homage to a Chicago icon. I had planned on spending hours at this museum but it was a small museum so it only took me an hour and a half to see all the exhibits and artwork. I saw artwork by Jasper Johns, Andy Warhol, Cindy Sherman, Cindy (1988) by Chuck Close, and Study for a Portrait (1949) by Francis Bacon. The special exhibit taking place at the time was Backstroke of the West by Iraqi-American artist Michael Rakowitz which included The Ballad of Special Ops Cody, a specially commissioned animated short film that features a version of a doll that was used in a 2005 fake hostage image. One of the more famous paintings I saw was The Wonders of Nature (1953) by Rene Magritte. 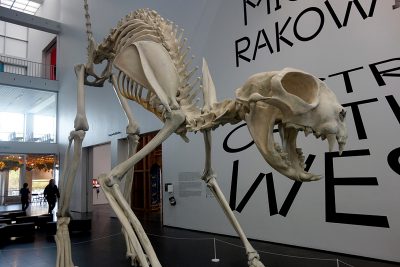 At the museum store I bought the book 33 Artists In 3 Acts by Sarah Thornton. This a book about how various artists pursue their careers in the art world. I thought it might offer an interesting glimpse into that world. Every profession does seem to create its own world around itself and your world tends to narrow to that. For example, programmers live in the Information Technology world which has its own forms of creativity and celebrity entrepreneurs. The theater community is also its own world which rarely manages to produce any plays that offer a window unto other professions and their world. Personally I like to explore other professions if only to escape the narrow confines of my career for awhile. Having a career is like being in college, stuck in the same course for the rest of your life. Actors probably have the best job for work variety because they get to pretend to be detectives and various characters which requires research into unfamiliar professions.

My plan was to do the 360° Chicago attraction at the John Hancock Center after the Museum of Contemporary Art but my timed ticket for the TILT platform was for 5:00 p.m. so I had to return to this area later in the day. I decided to visit the Intuit: The Center for Intuitive and Outsider Art instead. First I returned to my hotel to drop off the book and found the room had been cleaned before noon. I took the Blue Line from Monroe Station to the Chicago Station. There I photographed the Chicago Dramatists building again and visited the Intuit: The Center for Intuitive and Outsider Art where I was welcomed as soon as I got through the door. The greeter asked if I was familiar with outsider art. I am quite familiar with outsider art and the work of Henry Darger, the original outsider artist known for his illustrated story of the Vivian Girls.

Outsider art is art by self-taught or naïve art makers. Typically, those labeled as outsider artists have little or no contact with the mainstream art world or art institutions. In many cases, their work is discovered only after their deaths. Often, outsider art illustrates extreme mental states, unconventional ideas, or elaborate fantasy worlds.

Personally I consider this categorization to be very elitist. The impulse to create art is universal and cannot be considered the special privilege of those trained to be artists working within the established art world. I don’t think there is anything unusual about creating art as a hobby or producing representations of your elaborate fantasy world. I find outsider art fascinating precisely because its motivation is so understandable. 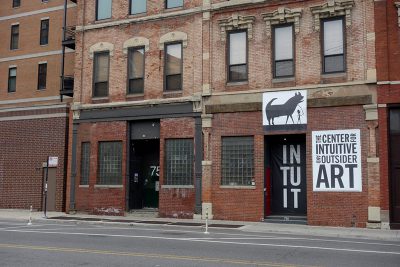 Intuit The Center for Intuitive and Outsider Art

The Intuit: The Center for Intuitive and Outsider Art is a very small museum which did not take much time to visit. I was only allowed to take photos in the Henry Darger Room, a dingy recreation of his messy living and working space. However I saw other visitors taking photos of whatever they wanted using their smartphones. I feel a little more conspicuous using my digital camera. I dropped a $5 bill in the donations box to cover the suggested admission. I was pleased that I managed to squeeze in a visit to this museum during my trip because it was a little out of the way.

I took the Blue Line subway back downtown and got off at Washington Station to find Block 37 but you don’t actually need to go out to the street. You can go into Block 37 directly from the subway. I ordered a Classic Grilled Cheese at Gayle’s Grilled Cheese and a Filberts Soda, Cola flavored, but there was no place to sit and eat so I used the escalators to go up several levels looking for an available table. Eventually I had to sit on a bench to eat my lunch without the benefit of a table. This mall didn’t really seem to have a food court as advertised.

I had noticed a temporary used book store on the lower level so I went back there. At the Carpe Librum used book store I bought Bob Miller’s Calc for the Clueless because I’m learning some basic calculus for deep learning. Although I have always disdained to get too heavily into math, I’m willing to study it when there is a legitimate need for higher math. I was still a little hungry so I went to a Pret A Manger store at 1:48 p.m. and bought a tuna baguette, a Honey Banana Bowl, and a can of coke. I think the food is a little too expensive at Pret A Manger but I like the cafeteria style of casual dining. 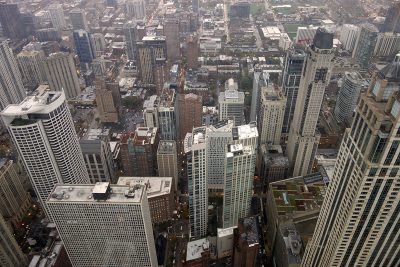 After returning to my hotel room I waited until early in the afternoon to return to the Museum of Contemporary Art area. The subway to Chicago Station was extremely crowded because it was the rush hour. Also, an incident involving the police caused a few minutes of delay. It was raining when I went to the John Hancock Center. There were no lines to get in and it was practically deserted on the observation deck. I was able to do the Tilt Experience by myself. The visibility was not great with some mist and fog but you could still see the city below you in all directions. I was tempted to wait until later in the evening when the lights would come on in all the skyscrapers but there wasn’t anything to do on the observation deck. I did buy a Robin Ruth Chicago Beanie Hat with Pom Pom at 4:57 p.m. I think this may have been a woman’s hat but it was the only winter hat they had for sale. I did wear it one the trip back to the hotel because it was still raining and I didn’t have my umbrella. I didn’t take any more photos that evening because I did not want to get my camera wet.