Yesterday I spent Thanksgiving In New York City. This posed some special challenges because everything was closed for the holiday but I still managed to explore the city. I went on this trip courtesy of my older brother who bought me a bus ticket as a belated birthday present. After traveling alone so often it was nice to have some relatives come along. But I mostly went my own way while they watched the Macy’s Parade. The whole purpose of the one day tour was the Macy’s Parade so the bus left Williamsport at the ungodly hour of 3:00 a.m. It left New York City at 3:00 p.m. which is also much earlier than usual. We rode on a brand new Susquehanna Trailways bus which was much nicer than their other buses. 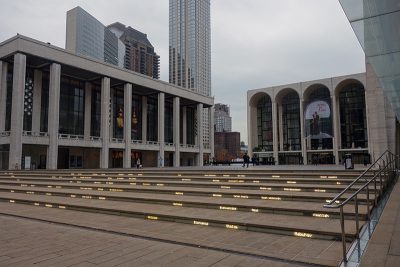 But then I proceeded to my primary mission which was to track down the underground arts scene in Brooklyn. My focus on this trip was Bushwick, the neighborhood currently being colonized by hipsters after they were priced out of Williamsburg. There are many murals and other forms of street art in Bushwick, mostly by the Bushwick Collective art group. This was the perfect thing to do during a holiday since Bushwick was practically deserted. There wasn’t anyone around to get in the way of my photographing. And of course street art isn’t going to be closed for a holiday. 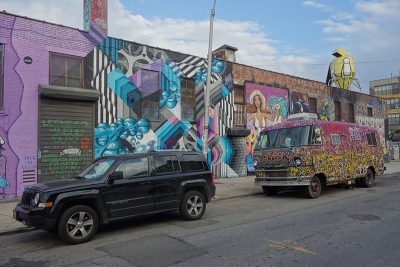 Bushwick is still a very gritty urban area. There were a lot of run down industrial buildings and heavily gratified garages. It would have been a very dismal and depressing area without the street art. But there are also lots of venues for really wild performances and edgy parties. I located House of Yes, Lot 45, Bat Haus, and Bizarre. You can’t find any decent photos of these establishments online because these places are on the bleeding edge. Lot 45 was particularly shabby and you would not suspect that anything interesting goes on there. Bizarre required a long walk along Troutman Street but I particularly wanted to see it because it is featured in the film Brooklyn Bizarre. Bizarre is a bar and a performance space which really lives up to its name since a lot of burlesque and drag shows take place there. 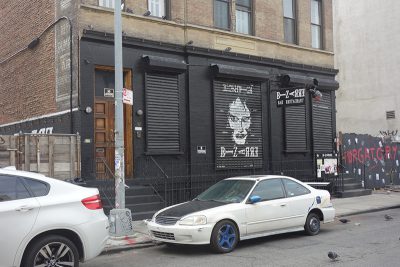 I did not spend much time in Bushwick because there was really nothing to do there. I could have checked out some hipster restaurants, bars, or coffee shops but everything was closed. So I took the subway back into Manhattan.

I didn’t really have any plans for the rest of the day and many streets in Manhattan were blocked off for the parade. Almost everything was closed for the holiday so there really weren’t a lot of options. I went to Times Square since that is always spectacular but I wasn’t interesting in checking out all the Broadway theaters again. I walked all the way to 11th Avenue to find the Gotham West Market but it was closed. I was hoping to use their public restrooms. I must have walked up West 44th Street because I passed the Actor’s Studio and New Dramatists. I took plenty of photos of the New Dramatists, housed in a former church, because this organization is of great interest to aspiring playwrights. 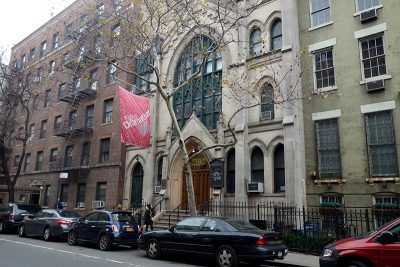 Duane Reade pharmacy and convenience stores were open for Thanksgiving so I stopped in at one to buy a bottle of Honest Peach Tea. I was dying of thirst. Surprisingly it only cost a dollar and that was the only thing I bought on the entire trip making this the cheapest New York City trip ever. But only because everything was closed. I drank my tea at the One Worldwide Plaza. I’m so familiar with the Hell’s Kitchen neighborhood now that I knew exactly where to go.

After that I walked up Broadway until I came across Ken and Karen near the Ed Sullivan Theater, aka the Late Show. It was quite unexpected to run into them. I was just wandering around and they did not know what to do next so I led them to Central Park. Along the way I showed them Carnegie Hall, the famous concert venue where every classical musician dreams of playing, but they were unfamiliar with it. It began to rain as we approached Central Park but fortunately it was just some light sprinkles and we did not get seriously wet. In Central Park I led them to Strawberry Fields, the memorial to John Lennon. I pointed out the Dakota Apartments where John Lennon lived and we saw the iconic black and white Imagine mosaic which had a crowd of people around it as usual. Fortunately everyone stayed off the mosaic out of respect so I still managed to get some good photos of it. That was a long walk so Ken and Karen decided to head back to the Lincoln Center. But we still had plenty of time before the bus would leave so I set myself the goal of seeing Cleopatra’s Needle, an ancient Egyptian obelisk. Along the way I came across the Bethesda Terrace and the Bethesda Fountain. I also saw the Alice in Wonderland sculpture which is difficult to photograph since somebody is always posing in front of it. But I did manage to get one decent photo. When I finally found Cleopatra’s Needle I took lots of photos of it and even walked up to the terrace and saw the plaques with a translation of the hieroglyphs. 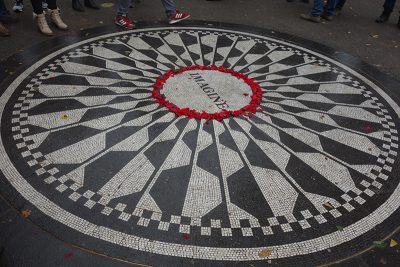 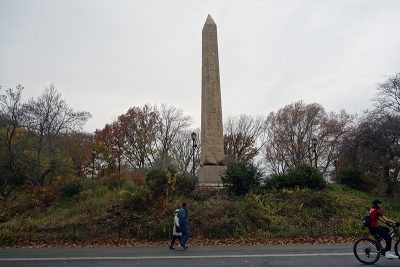 I began to get anxious about catching the bus so I hurried through Central Park to get back to its southern edge. Along the way I did stop to photograph some the famous apartment buildings that overlook the park; The San Remo, The Century, and The Eldorado all on Central Park West. I also took photos of every statue or monument that I came across. When I finally got back to the Lincoln Center I still had over an hour before the bus left so I had plenty of time to explore the immense plaza. I saw the Guggenheim Bandshell which is something I overlooked on previous trips. I saw our Susquehanna Trailways bus parked behind the Lincoln Center in front of the New York Public Library for the Performing Arts so they really didn’t go far to park the bus for the day. The library was closed for Thanksgiving so I suppose it was OK to park there. 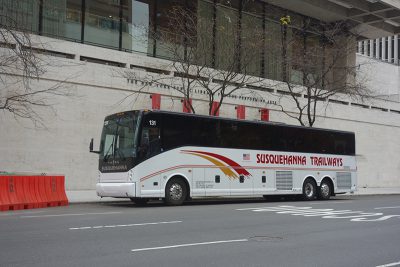 It took the bus over an hour and a half to get to the Lincoln Tunnel because we got stuck in a gigantic traffic jam. I don’t know what the problem was but maybe everyone was leaving the city at the conclusion of the Macy’s Parade. We stopped off at the Tick Tock Diner in New Jersey for dinner. I was famished because I had not eaten anything since breakfast at McDonald’s. By the way, we did not stop at the Lake Harmony McDonald’s as usual. Instead the bus took us to a McDonald’s in New Jersey just before we got into New York City. I ordered the Thanksgiving special meal which was roast ham. The diner served large portions but the roast ham was thin slices, not thick slices, so even though it looked like a lot, I was able to finish it.

All during the bus ride home I was jazzed with inspiration. It is always very inspiring to visit New York City. Unfortunately, I’ve never done much with all my inspiration but I’m trying to be more focused on a serious goal. I really expect to eventually make a substantial breakthrough in my play writing. In the meantime I am finally discovering where underground art has hidden itself in New York City. Maybe next year I will make on overnight trip to check out the cutting edge performances which only occur in the evenings.