On Friday my goal was to explore the Little Tokyo historic district in Downtown Los Angeles. I took the Metro Red Line to the Union Station. From there I took the Metro Gold Line to Little Tokyo / Arts District Station. It was raining when I got off the train but I had my umbrella with me. This was the only day when I really needed it.

First I photographed the Japanese American National Museum and then the Geffen Contemporary at MOCA. Neither museum was open yet so I had plenty of time to walk around Little Tokyo. I walked through a parking lot behind the Go For Broke memorial and found the East West Players theater. Next I found Astronaut Ellison S. Onizuka Street with Weller Court, Challenger Memorial and Los Angeles City Hall in background.

I had a lot time before everything opened at 11:00 a.m. so I walked south on Main Street to locate the Los Angeles Theatre Center which I forgot on my last trip downtown.

After walking back to Little Tokyo I went through the Onizuka Street again and saw the Friendship knot. Then I went to the Japanese Village Plaza. I located the Aratani Theatre and found a Japanese Garden which was not open to the public. I noticed a Jodo Shinshu and one other temple which was entirely gated and behind a fence. That was probably the Higashi Honganji Buddhist Temple. I also saw the Centenary United Methodist Church. On the way back to the museums I saw the Honda Plaza across South Central Avenue.

I went back to the Japanese American National Museum and sat on the steps until it opened. Some school groups had shown up by then. Admission was $10.00, not the $9.00 in my notes. I saw three exhibits; Uprooted: Japanese American Farm Labor Camps During World War II, Common Ground: The Heart of Community, and Tatau: Marks of Polynesia. I used the restroom at this museum. 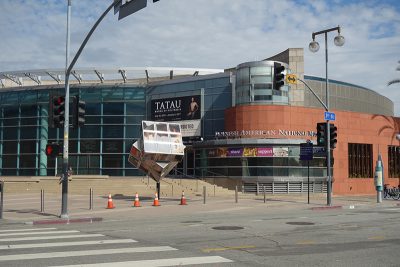 Next I went to the nearby Geffen Contemporary at MOCA. I paid $12.00 admission and got a ticket which was good for MOCA on Bunker Hill on the same day. Geffen Contemporary was a darkened museum featuring art installations, mostly large-scale video installations. I sat and watched a film which appeared to follow an urban explorer venturing into abandoned places. I saw a sculpture of the numbers 1968 in broken mirrored type. This was by the artist Doug Aitken who also did most of the video installations I saw. For example, there was a black mirror room playing a video of a woman checking in / checking out. This was “Black Mirror” (2011) a disorienting, octagonal mirrored room. Its video imagery of a rootless drifter (actress and clothing designer Chloû Sevigny) terminally disconnected in spite (or perhaps because) of our communication-stuffed environment is reflected into a kaleidoscopic, Cubist-style infinity. I also saw a translucent public pay phone, also by Doug Aitken. I didn’t take any photos in this museum because it was too dark and I didn’t see anyone else trying to take any pictures. 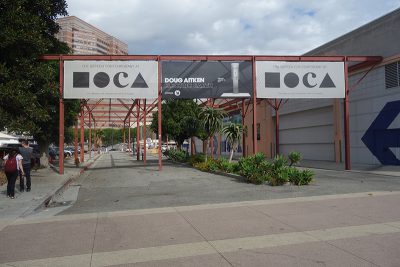 After leaving the museum the sun was finally shining bright so I walked back to the East West Players theater to get a better picture. On the way back to Weller Court I made a side trip to City Hall to get better photos. I saw a KTLA film crew setting up their camera, yet another instance of a television news crew encounter during my trip. One of the Star Line Buses roped in the woman reporter for their celebrity sighting. She must have been flattered to go along with that. 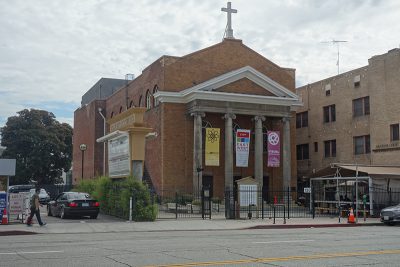 I went to the Kinokuniya Bookstore at Weller Court and bought The Rough Guide To Tokyo and the anime film Paprika on DVD. I’m not sure if I will ever visit Tokyo because I can’t even decipher the written language. Little Tokyo will have to suffice for now. I had lunch at the Kagura restaurant in the Japanese Village Plaza. The spicy pork balls were so hot that they burned the roof of my mouth. I was afraid I would be in intense pain for the rest of the trip, but fortunately it was not that bad. I had to eat with chopsticks which I still don’t know how to use. My trick is to simply not pull them apart so I can use the chopsticks like pliers.

My next goal was to visit the other MOCA (Museum of Contemporary Art) museum on Bunker Hill because my ticket from the Geffen Contemporary at MOCA was good for that museum too on the same day. I walked from Little Tokyo to Bunker Hill and along the way I climbed the steps next to the Angels Flight funicular railway which was shut down after several accidents.

At the Museum of Contemporary Art I saw a small Jackson Pollock painting, a Picasso, Andy Warhol’s Telephone, and several Alberto Giacometti statues. I used the restroom at this museum after a short wait since only one person could be in there at a time. At the MOCA store I bought Station To Station DVD, a film by Doug Aitken. I also bought the November 2016 edition of POETRY magazine since for some reason they had that.

I walked to the Pershing Square Station. I accidentally took an escalator down to a parking garage because I thought it was a shortcut to the subway. I took the Red Line back to the North Hollywood Station. My room was not cleaned when I got back so I took a stroll down Burbank Boulevard. I photographed my hotel, the California Institute of Abnormal Arts, the Circus Liquor sign, the Lonny Chapman Group Repertory Theatre, and Tom’s #7 Diner. I had dinner at Tom’s #7 Diner. I ordered a strawberry milkshake and a cheeseburger. After eating I walked down Cahuenga Boulevard and photographed; a car on a roof, the Acting Bootcamp, a mannequin Palm Reader, and the Iliad Bookshop where I could not resist going in to buy; Churchill Plays: One, Euripides Bacchae Cambridge Translations from Greek Drama, and Euripides The Bacchae translated by Michael Cacoyannis. I’ve been buying various editions and translations of Euripides Bacchae because this is probably the oldest shamanic play and expresses the triumph of the irrational over the rational mindset. 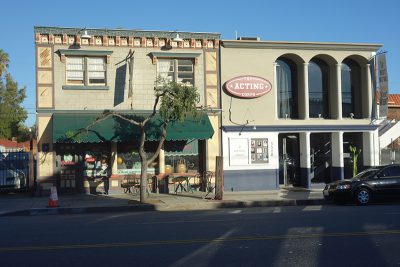 That evening I saw the musical Weed Shop The Musical at the Eclectic Theatre Company at 8:00 p.m. I took the Orange Line to Laurel Canyon Boulevard just as I practiced. I arrived too early so I went to a 7-11 and bought a small package of Twizzlers and a bottle of Starbucks Frappuccino. I ate that while sitting on a bus stop bench. I waited outside the theater after that. The Playbill program served as the ticket.

The musical was very funny and quite professional. It looked ready for Broadway. The cast was multi-racial. To reach the restrooms you actually had to go onstage, behind the Hollyweed Hills. Somebody’s phone began playing music during the show and one of the actresses responded by working it into the show, “Do you hear that music?”. I think this may have been the first performance of this musical since some of the audience were carrying congratulatory bouquets of flowers.