Yesterday I made my first extensive trip to Brooklyn. I have thoroughly explored Manhattan and my recent trips to New York City have gotten very repetitive. Fortunately  Brooklyn is like a whole other side of New York City for me to explore. Brooklyn is in the process of becoming another Manhattan. I saw plenty of evidence of that on this trip because some parts of the city are like a massive construction project with numerous skyscrapers going up. This wasn’t my first venture into Brooklyn since I’ve walked across the Brooklyn Bridge and wandered around DUMBO before. I’ve also made a trip to the Brooklyn Museum. But yesterday I spent most of the day in Brooklyn and saw more than one neighborhood.

There was a street fair on 8th Avenue which caused a traffic jam and forced our bus to find an alternative drop off location. Eventually the bus made its way to 49th Street and left us off at the Worldwide Plaza. I walked to the 49th Street Subway Station located outside of Olive Garden on the north end of Times Square, across from the TKTS Ticket Booth, and took a N train heading downtown. My big concern was to determine how much travel time to allow for getting back to Manhattan from Brooklyn. I think 25 minutes is about right. The subway goes across Manhattan Bridge so I got a good view of the Brooklyn Bridge before the subway went back underground to reach the Atlantic Avenue / Barclays Center station where I got off.

When I exited the subway I was on the far side of Atlantic Avenue and could see Williamsburgh Savings Bank Tower directly in front of me. The Williamsburgh Savings Bank Tower is one of the tallest buildings in Brooklyn and serves as a good landmark for orienting yourself. My first goal was to locate all the theater in the Brooklyn Cultural District. Most of these theaters are associated with the Brooklyn Academy of Music (BAM). Unfortunately there was quite a lot of construction going on in the area which made getting good photos difficult. In addition to the BAM facilities, I saw the Mark Morris Dance Center, the Polonsky Shakespeare Center, and the BRIC Arts Media House. I walked a little further that I intended to and found Junior’s Restaurant and Long Island University. 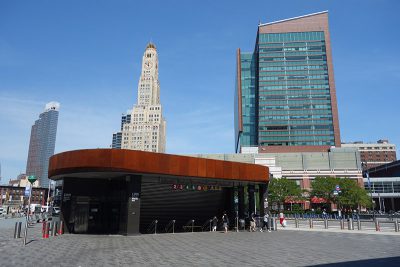 But eventually I walked back towards Atlantic Avenue and found South Oxford Street because I wanted to see the South Oxford Space, a performance space run by the Alliance of Resident Theatres/New York. Several theater companies are using that as their address. Unfortunately this building was having its facade restored. The entire building was covered in a black drape so I couldn’t even see what the place looks like. As it turned out, this wasn’t far from the Fulton Street entrances of the Lafayette Avenue Station where there were several things I wanted to see. I found the mural of Comandante Biggie (aka The Notorious B.I.G.) and the bookstore, Greenlight Bookstore, which was one of many book stores I wanted to check out. I searched practically the entire store for the drama/theater section where I found the perfect book, Bacchae: A New Translation by Robin Robertson. This is like the fourth translation of this ancient Greek play by Euripides which I have bought. Ordinarily, I would not read multiple translations of the same play, but Bacchae is a very significant play since it is the earliest example of shamanism in drama. I have been reading multiple translations of Anton Chekhov’s plays but that is only to become very familiar with them after forgetting most of their plots. 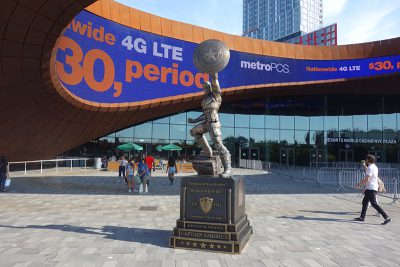 I was going to walk all the way down Atlantic Avenue to the Grand Army Plaza and Prospect Park but after coming across the intersection with Fifth Avenue I decided to go down that street instead. Fifth Avenue was the street I did a Google Street View walk through of just before my trip so it was fresh in my mind. I took a lot of photos of establishments on the street corners for my notes. Fifth Avenue cuts across many side streets so you need to look for distinctive establishments to determine your progress along the street. Eventually I reached 1st Street where there was a Mexican restaurant I added to my notes as a probable place to have lunch, Calexico. I did indeed stop in at Calexico for a bite to eat. But all I ordered was a drink and a single taco, which didn’t prove to be much of a meal. At least I got to use their restroom although I think I blew a fuse using the hand dryer. I almost left my book at this restaurant but fortunately it occurred to me that I was a little light handed before I got too far down the street. I located the Brooklyn Superhero Supply Company and the Record and Tape Center store before leaving Fifth Avenue. 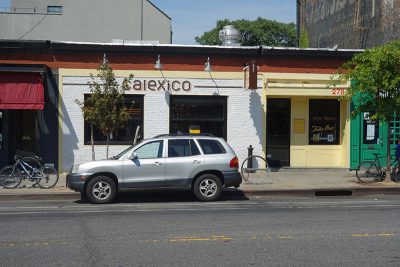 I want to say a little more about this street since it was a typical urban experience which I find particularly fascinating. These kinds of main drags are like retro city retail streets before the shopping mall and Walmart killed downtown. Fifth Avenue was lined with diverse retail stores, restaurants, boutiques, and other sorts of establishments. Some of the stores where old and decrepit and some were brand new and cutting edge. It seemed like a magical street offering all sorts of unusual dining options and stores with hidden treasures. This alone makes Brooklyn worth exploring even though I did not spend much time going into various establishments.

After returning to 1st Street I walked up the street to look at the brownstones and eventually reached Prospect Park. But before I went to Prospect Park I did make a side trip on 7th Avenue to find the Community Bookstore, a famous Park Slope bookstore. There I bought a copy of Humboldt’s Gift by Saul Bellow. This novel was on my wish list because it is a a roman à clef about Bellow’s friendship with the poet Delmore Schwartz. To be honest, I don’t know when I will find the time to read this book. I’ve probably bought books six years ago in New York City which I still have not read. I have a huge backlog of books to read. 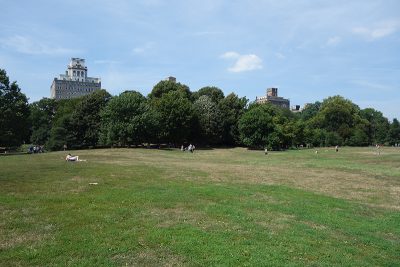 I didn’t spend a lot of time researching Prospect Park so I only walked across the Long Meadow until I reached the hiking trails of the Midwood, Brooklyn’s oldest remaining forest. I felt like I was back in Pennsylvania! Eventually I managed to find the entrance to the Brooklyn Botanic Garden which I sort of remembered as something to check out. But I didn’t really have any details on it in my notes so I was surprised by the $12.00 admission fee. I thought it was worth it because the Brooklyn Botanic Garden is an extensive series of gardens including a rock garden, a rose garden, a cherry tree esplanade, and a Japanese pond. I also saw the Celebrity Path and took photos of many of the stepping stones. This was a pleasant break from the urban environment but it was a very hot day, too hot to be outside. 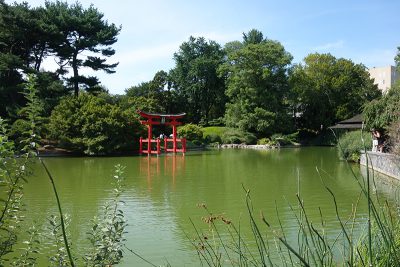 When I left the Brooklyn Botanic Garden I managed to find the portion of Flatbush Avenue that cuts through Prospect Park and followed that to the Grand Army Plaza. I did walk pass the Prospect Park Zoo which was tempting but it was getting late and I wanted to leave enough time to complete my planned itinerary. I definitely didn’t want to miss the Soldiers’ and Sailors’ Arch or the Brooklyn Public Library which I photographed in addition to many other sights in the area. 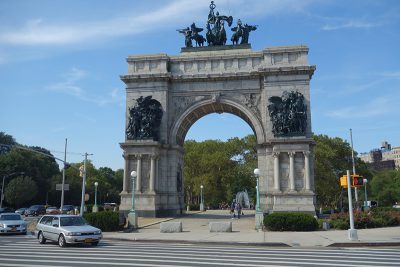 I circled around the Grand Army Plaza to find Vanderbilt Avenue, another major thoroughfare which I explored on Google Street View. I walked up Vanderbilt Avenue until I located yet another bookstore, Unnameable Books. Unnameable Books was a very cramped book store but after finding their drama / theater section I found a book to buy, Aunt Dan & Lemon by Wallace Shawn. Wallace Shawn is best known as an actor. He had a role in The Princess Bride. But he is also a playwright and well respected in the New York City theater community. Now I had three books to carry around. I stopped in at the coffee shop and bakery next store to drink an iced latte since I was dying of thirst.

When I reached the corner of Vanderbilt Avenue and Atlantic Avenue I walked west back to the Barclays Center and entered the Atlantic Avenue / Barclays Center Station to take the subway back into Manhattan. This subway ride was not uneventful. First a group of young black men insisted on doing some subway dancing for tips on the journey back to Manhattan. Then a black woman suffered a seizure on the subway car I was in, forcing the train to halt at the 34th Street Station. Everyone had to get off that train and take the next train to arrive on the other side of the platform.

Once I was back in Manhattan I immediately went to the Drama Book Store where I bought a copy of The Weir and Other Plays by Connor McPherson. Then I walked to Bryant Park and took photographs of a few literary statues there. Since I hadn’t eaten much all day I went to Obao on 9th Avenue where I ordered a drink at the bar because the restaurant was too busy to get a table. It didn’t look like anybody was going to take my order at the bar so I left and walked down the street to Two Boots Pizza where I had a slice of a pizza called The Bird and an unsweetened tea. While eating my pizza I overheard a playwright talking to a woman. It may have been an interview with a journalist. For the rest of the evening I didn’t do anything in particular except wander around taking odd photos of anything that caught my eye. Nevertheless I did take some interesting photos this way; policemen on horses in Times Square, The Little Theatre near Sardis (don’t know the story behind this place), the trash left by the 8th Avenue street fair, a sneak shot of a homeless person, and Engine 54, Ladder 4, Battalion 9 fire station. 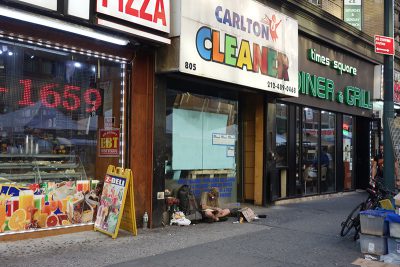 This trip to New York City was inspiring because it opens up an whole new borough to explore. It will be like finding a virtual duplicate of New York City with entirely new neighborhoods to wander around and new experiences to be had. Brooklyn might not have as many attractions as Manhattan, but I am eager to explore its culture and check out the creative scene as far as possible. I think I will visit Williamsburg during my trip to New York City next month.