Over the weekend I made a rare overnight trip to a small town in Pennsylvania. I spent the entire weekend in New Hope PA. Ordinarily, I wouldn’t stay somewhere overnight when I can just drive home, but New Hope is three hours from Williamsport so driving for six hours in one day would be tedious. The main purpose of this trip was to see a play at the historic Bucks County Playhouse. So technically this was a theater trip.

On July 23rd I did make a preliminary trip to Doylestown and New Hope in order to visit two museums and take some photos in preparation for this lengthier trip. Based on that trip, I had a better idea of the route and adjusted my notes with a few details on tricky turns. I just want to add that I passed the Buckingham Green Shopping Center before reaching Lahaska.

Upon reaching New Hope I parked at the American Legion on the Delaware Canal Towpath again which cost $10.00 for the day. I arrived at 10:30 a.m. and had to kill some time before the play began at 2:00 p.m. I walked along South Main Street and took more photos but the sky was cloudy so my photos are a little dark. One thing I made sure to find was Lenape Park, a small park next to the railroad tracks which is easy to overlook. I also walked across the New Hope-Lambertville Bridge into Lambertville where I took more photos of various establishments since I had failed to explore North Union Street on my previous trip.

I did stop in at The People’s Store Antiques Center which opened at 10:00 a.m. This antiques mall has four floors of dealer spaces. Much of the merchandise was high quality and very expensive. I saw a lot of tempting antiques but eventually I only bought a fancy arts and crafts pin which had an interesting design. That was only $20.00. Looking at the antiques was like visiting a museum with an interesting collection of cultural artifacts. There were many other antique stores in Lambertville but I did not have the time to explore them all.

After walking back across the bridge into New Hope I went to Farley’s Bookshop where I bought the DVD Gods and Monsters starring Ian McKellen and Brendan Fraser. This movie was on my wish list because it takes place in Los Angeles which will be the destination for my vacation this year. I also bought the book Introducing Jung but this turned out to be a book I’ve already bought and read. It had a different cover so I did not recognize it. I am currently getting back into studying some aspects of Jungian psychology for my playwriting. After that I had lunch at Karla’s Restaurant on West Mechanic Street where I ordered a crab cake sandwich and a cocktail, a Sidecar. I sat on the enclosed patio which was full of hanging plants. It reminded me of the sort of cafes you find in New Orleans. 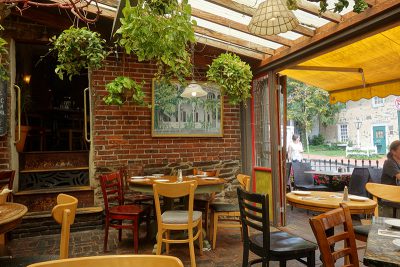 After lunch I think I went for walk along the canal towpath and eventually wandered up North Main Street where I took a photo of PNC Bank. This is practically the only place in town with an ATM so I wanted to document that for my notes. I stopped in at Phantasm Comics where I bought a paperback book, Sin-A-Rama: Sleaze Sex Paperbacks of the Sixties Expanded Edition. This was probably the most adult thing in the comic book store. I bought it because I like paperback books. I returned to my car to store my purchases and then proceeded to the Bucks County Playhouse for the highlight of my trip.

The play I saw was The Divine Sister by Charles Busch. I somewhat familiar with Charles Busch since he is famous in Off-Broadway theater in New York City. I’ve read a few of his plays and bought his novel, Whores of Lost Atlantis,  which I haven’t read yet. Charles Busch is a famous playwright and transvestite. The Divine Sister is a farce and a parody of all the movies featuring nuns. Although this play was not quite my cup of tea, it was sufficiently interesting to justify my trip. Since it was a Saturday afternoon matinee show I could have avoided an overnight stay in New Hope, but there were several other things I wanted to do in town. I noticed that the entire row in front of me failed to return after the intermission. I don’t know if they were offended or just wandered off. I almost fell asleep during the show because the heat had left me exhausted and the cool, dark theater encouraged taking a nap. Several old songs from the 1950s were played during the show and I was so tired that I began to have curiously vivid visions of the 1950s. 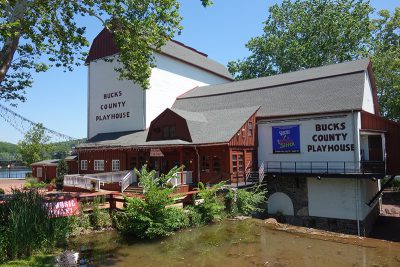 When the play was over I drove to Rodeway Inn And Suites about one mile out of town in order to check into my room. I selected this hotel because they offered an one night stay. All the bed and breakfast places in town required a two night stay for the weekend and that would have been more expensive. After freshening up a bit I drove back to New Hope. This time I parked at Union Square which has 268 parking spaces so it as easier to find a place to park. This parking lot had parking kiosks which required some study to use. I feed in some quarters and got a printed receipt which I had to display on my dashboard. If using a credit card, you had to insert your card first, remove it, and then add time before printing the receipt. This parking lot was right next door to the New Hope and Ivyland Railroad excursion train station.

I had a dinner reservation for 8:00 p.m. so I intended to remain in town until after that. The first thing I did was arrange for a Wells Ferry Boat Ride. There was one final boat ride at 5:00 p.m. and they almost cancelled that because they were expecting thunder storms. But fortunately I was able to go on the final boat ride of the day. The boat tour was a 45 minute ride on the Delaware River up to the toll bridge and back down to the Bucks County Playhouse to end at the far side of the New Hope-Lambertville Bridge on the Pennsylvania side. The boat landing was below the Landing Restaurant. There wasn’t a whole lot to see on the river but I saw many lavish river homes. I did get some great photos when the sun was lighting up part of the river bank against the dark and threatening storm clouds. When we returned to shore I rushed back to my car before my parking ticket expired and to get my umbrella which I had forgotten to take with me. That was very lucky because there was a thunderstorm and pouring rain shortly after I reached my car. I waited it out in my car. After the rain was over I saw a rainbow over the New Hope and Ivyland Railroad. I got a kick out of that because it reminded me of all the rainbow flags around New Hope that show gay pride. 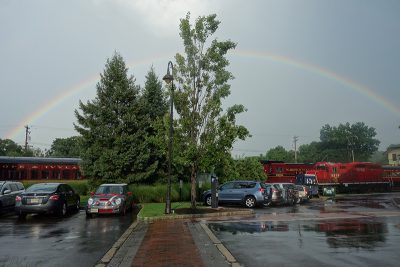 Since many establishments closed at 5:00 p.m. it looked like there would be nothing for me to do for three hours until my dinner reservation. So I decided to go for a long walk on the canal towpath. I walked all the way north to the Route 202 toll bridge to New Jersey. This was a very pleasant stroll along what looked like a swampy, flooded road through the woods. I passed some abandoned railroad cars and saw a few lavish homes along the towpath. Some of the homes had pools and various types of rustic stairs up to the towpath. A saw a yellow house with its light on that looked especially idyllic along the canal. Towards the Route 202 toll bridge I even saw a few cars on the towpath which must be allowed to reach a few residential homes. On the walk back I noticed an entire family of deer watching me from the other side of the canal. I took a few photos of them but the light was growing dim by that time so those photos aren’t that great. 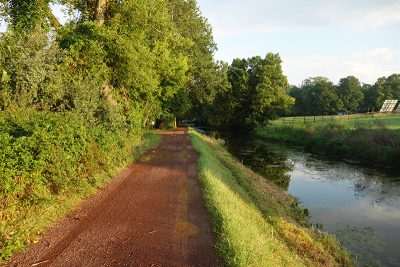 I got back just in time for my dinner at Marsha Brown Restaurant. I saw a rabbit on the lawn of the Mansion Inn right next door to the restaurant. Since he didn’t run away I was able to get some good photos of him. It is hard to get a photo of a wild rabbit. At the Marsha Brown Restaurant I ordered an Ice Tea and the Chalmette Scallops atop New Orleans style pork bacon and greens. I’m not sure if the Ice Tea had any alcohol but it did not seem to have any effect upon me so probably not. This was an expensive meal, over $50 with tip, so I put it on a credit card. I saw a bit of the Olympic Games Rio 2016 playing on the widescreen TVs. Although I was going to go right back to my hotel after dinner, I did wander down South Main Street as it was getting dark. I entered the Three Cranes Gallery Boutique where I was a bit tempted by the wooden Buddhas and gem stones but the prices were a bit high. Overall, the quality of merchandise in the New Hope stores was excellent and could tempt a person to spend a lot of money. The shopping was a little high end compared to comparable Pennsylvania small towns. For desert I had two scoops of Coffee Ice Cream at Moo Hope Ice Cream which was still open and quite crowded at around 9:00 p.m. 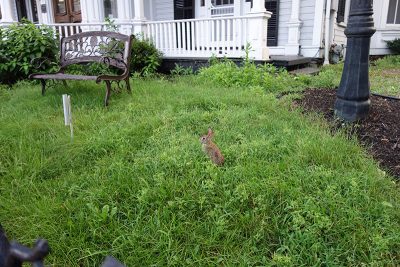