Yesterday I made yet another trip to New York City because I just can’t get enough of that city. For this trip I focused on Greenwich Village even though I’ve explored that neighborhood many times before. I did manage to find many new establishments to see and discovered a few things.

Upon arrival in New York City I walked to the Worldwide Plaza subway station and took a C train down to West 4th Street. I had to add value to my Metrocard. It is mark of sophistication to add value to your Metrocard instead of just buying a new one, but I still struggle a bit with the vending machines. There were some people hovering around the vending machines to offer assistance, but they were not MTA employees. They were hustlers looking for a tip.

I emerged from the subway on West 4th Street just outside the IFC Center. From there I quickly located some nearby establishments of interest; the Minetta Lane Theatre, the Blue Note Jazz Club, and the Village Underground. My next goal was to find the Edna St. Vincent Millay House, one of the narrowest residential buildings in New York City at just nine and a half feet wide. I was particularly interested in finding this because I read the biography of Edna St. Vincent Millay, Savage Beauty, and mention this tourist attraction in a play I am writing. Nearby I found the Cherry Lane Theater. I was actually going to see the play Out of the Mouths of Babes there but the performance was canceled when one of the elderly stars fell ill. I still saw plenty of advertisements for this play around the village. I saw a few tour groups being lead around the area and the Cherry Lane Theater was one of their stops. 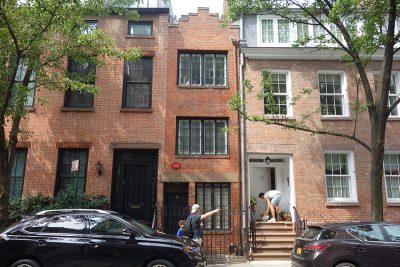 After that I went on a long walk locating various establishments of interest to me. For example, I located Stick, Stone & Bone on Christopher Street. This store sells crystals, dreamcatchers, sage, and various other items for shamanic rituals. I will explain my interest in that a little later. I also found the White Horse Taven where Dylan Thomas drank himself to death. That bar has many other literary associations. I visited the Westbeth Artists Community and saw the entrance to the LAByrinth Theater Company. I even entered the public courtyard and took a photo of that since I did not find any decent photos of it online. The Westbeth Artists Community is a former industrial building which has been converted into residences for artists. There is such a demand for affordable housing for creatives in NYC that Westbeth Artists Community has a long waiting list for new residents. I almost walked pass HB Studio, an actors training studio, without noticing it but that was on my list too.

From there I basically just wandered around Greenwich Village taking better photos of landmarks that I’ve already seen before. I did notice a police presence outside the Stonewall Inn, but it was just one cop and a squad car with its lights flashing. The Christopher Park is now the Stonewall National Monument and I saw the new signage.

For lunch I went to Umami Burger on 6th Avenue in Greenwich Village. I’ve read about this burger chain in all of the travel guides to Los Angeles where the restaurant chain originated. I order a Pepsi with real sugar, the Maple Fries, and the Truffle Burger. The Maple Fries were insanely tasty; like candy, bacon, and crispy fries all rolled up into one delicious package. I regret that I could not finish the fries after the burger filled me up. Seriously, you could have made a meal out of just the big helping of Maple Fries.

After lunch I tried to locate a few more places on my list; Patchin Place, Henrietta Hudson (a lesbian bar), and finally Barrow Street Theatre where I was going to see the play, The Effect. This was my major reason for spending the day in Greenwich Village but this play was a replacement for the play I was going to see at the Cherry Lane Theater. After locating the theater I wandered very far trying to find some other places on my list but I got a bit lost and eventually had to return to the theater in time to see the play.

Although The Effect wasn’t the play I wanted to see, in many ways it was a better choice because it concerns the same subject matter that my play The Shaman is about, how to cure depression. The Effect is about how psychiatrists try to treat depression using drugs while my play is about how spirituality can be used to cure depression. Actually that just provides the excuse and dramatic action for my play. It’s real purpose is to convey my radical ideas on inspiration and visionary art. Lately I’ve been struggling to expand my play so that it is at least 90 pages for a typical full length play, so anything that gets me thinking about it serves that purpose. I bought the published version of The Effect and finished reading it just a few days before my trip. This staged version changed the dialogue a little for American audiences since this production was brought to the United States by the National Theatre of Great Britain. The play had a impressive hospital setting. In fact, the stage set looked better than the theater itself which had a very shabby lobby and decrepit restrooms. 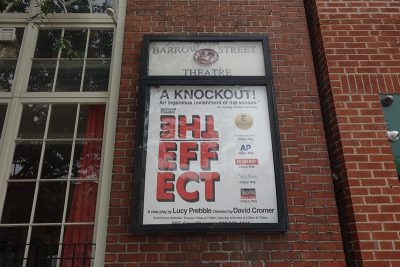 When I left the theater I found it was raining. Fortunately I had bought an umbrella at a CVS pharmacy earlier in the day when there was a mild rain shower. But for the rest of the day it was raining. I went ahead with my plans in spite of the rain. First I went back to the Stick, Stone & Bone store on Christopher Street. Since I’m currently polishing my play on shamanism I thought it would be appropriate to visit a store in Greenwich Village devoted to shamanism. I found many photos of the store interior online which suggested the store sells books on shamanism, but I did not see many books in the store. All they really had in abundance was polished stones and crystals. I bought a large carnelian gemstone for $34.00. This was just a token purchase since I don’t really think crystals have any magical properties. I was hoping to find books like the one I’m currently reading, The Nature of Shamanism by Michael Ripinsky-Naxon which provides a scholarly analysis of how shamanism functions as a religious metaphor. Still, my token purchase of something at a shaman store after seeing a play about the purely medical treatment of the dispirited state establishes a symbolic connection which has a certain significance given the play I have written. Maybe it will provide a curious biographical detail for future scholars. 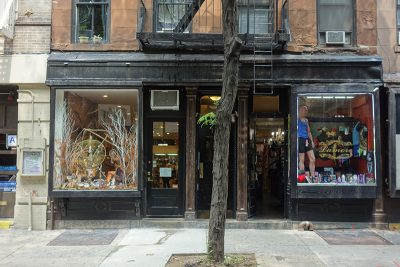 Just pass the Stick, Stone & Bone store I noticed that there were stars set into the sidewalk in front of the Lucille Lortel Theater on Christopher Street. Maybe the carnelian gemstone had the mystical effect of making me notice this detail. I would not have noticed the stars if I had not gone shopping at that store. These stars, like Hollywood stars set in the sidewalk, where definitely of interest to me since they were all for playwrights. I took photos of the stars for Israel Horovitz, Neil LaBute, Lee Blessing, Paula Vogel, Tennessee Williams, and Charles Ludlam.

My goal was to do some more shopping. I found Casa Magazines near Abingdon Square Park but the store was very small and crowded and I couldn’t find any French magazines so I left without buying anything. Then I finally located the British restaurant A Salt & Battery. I considered going in for a small bite to eat but they did not appear to have any table space and eating outside in the rain was not an appealing proposition. So I walked far to the east and located the Gothic Renaissance store on 4th Avenue. I’m way too old to dress goth so I just took some photos of the exterior. I saw several other people taking photos of the extravagantly strange window displays but you can’t find such photos online for some reason. Next I went to the Strand Bookstore which was annoyingly hot and crowded in spite of the rain. Fortunately they had plastic bags for umbrellas so everyone didn’t have to drip water over the books. The Strand Bookstore has an impressive selection of used books on their drama book shelves. I found a rare book that was on my shopping list, Divine Fire: Eight Contemporary Plays Inspired by the Greeks by Caridad Svich for only $10.00. Not far from the Strand Bookstore was the geek paradise of Forbidden Planet and although I did walk on by I quickly made the decision to peek inside. I wasn’t going to buy anything since I’m not into comic books but I did buy a graphic novel, Monstress, because the artwork was particularly fantastic and kind of mystical.

I was getting tired of the rain so I walked to Union Square and took the subway back uptown to 42nd Street. At Times Square I saw some huge billboards for the film Suicide Squad and I took lots of photos of them. The character of Enchantress is particularly intriguing to me because she seems to personify the anima, the shadow side of the male psyche which often takes the form of a femme fatale. I walked up to West 44th Street and headed east to find the Algonquin Hotel which has some literary significance. Finally I went to Barnes & Noble on Fifth Avenue. This is supposed to be their huge flagship store but it looked no larger than a typical Barnes & Noble. I bought two books there; Chinglish and Playwrights Teach Playwriting. 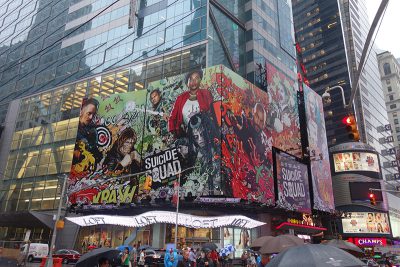 For my next trip to New York City, I plan to explore Brooklyn. Manhattan is getting a little boring even if I can still find more obscure details to discover. Brooklyn is still the great uncharted territory for me, the unknown. Recently I’ve come up with the theory that travel lifts my mood because there is something really satisfying in exploring uncharted territory, as long as you feel perfectly safe doing so. This could have something to do with how man evolved from a hunting and gathering society. The mind isn’t built to settle in one place for too long. It needs the stimulation of exploring new environments.