For my last Pennsylvania weekend getaway this year, I went to Harrisburg, the capital of Pennsylvania. I have not been to Harrisburg for over 5 years but I have been there before. The city is bankrupt and kind of seedy. However, Harrisburg might have a lot of technology jobs associated with state government so I should probably do more research on the region. The location of Harrisburg would not be an improvement over Williamsport, because Harrisburg is still far from Philadelphia and Pittsburgh. It is just further south than Williamsport.

Driving to Harrisburg from Williamsport is pretty easy since you just drive south on Route 15 practically the whole way. Everyone likes to circle around Harrisburg but I prefer a simple route and follow Route 15 all the way down and cross the Susquehanna River over the Harvey Taylor Bridge. I parked at the Walnut Street Garage which cost me $18.00 for four hours. I need to find someplace else to park!

The first place I visited was the State Museum of Pennsylvania. I’ve been to that museum before and even remembered most of the exhibits. But I think that was before I had a digital camera since I don’t have any photos of the museum. The State Museum of Pennsylvania is right next to the Pennsylvania State Capitol building so I took lots of photos of the capitol dome as I walked pass. I might even be able to use these photos at work if we need a photo to represent the state government. You can tour the Pennsylvania State Capitol building but I did not have time for that on this trip. 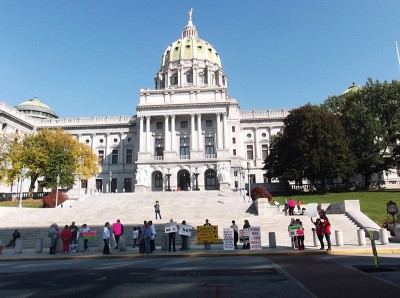 The State Museum of Pennsylvania doesn’t represent the state very well in my opinion. It is more of a natural history museum mashed together with a historical society museum. For example, it has a Civil War exhibit which accounts for Gettysburg but practically nothing on the Amish. Lycoming County is only represented by a Textron Lycoming airplane engine. Some of the highlights of the museum include; a huge statue of William Penn, dioramas of mammals found in the state, the Marshalls Creek mastodon skeleton excavated in the Poconos, and many Native American artifacts. There was an art gallery with a decent collection of modern art by artists in Pennsylvania.

I paid an extra $3.00 to see a half-hour show in the museum’s small planetarium. I saw Back to the Moon for Good, a documentary on the Google Lunar XPRIZE competition. Penn State University is trying to win that prize with their Lunar Lion Team. When I first heard about that, I joked that Penn State charges enough tuition to fund its own space program.

I had to wait until 1:30 p.m. to visit the museum store because the staff was out to lunch. I bought the book Better In The Poconos: The Story of Pennsylvania’s Vacationland by Lawrence Squeri. I’ve come across this book while researching the Poconos but I did not buy it because it is an expensive book. However, it was the most interesting book in the museum store so I bought it then. 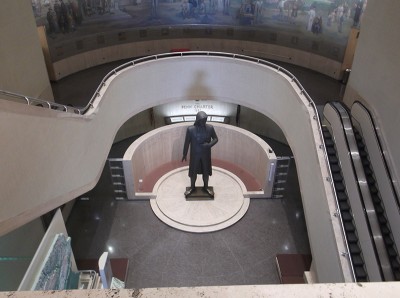 I walked back to the Walnut Street Garage to put my purchase in my car. As I walked pass the Pennsylvania State Capitol building I noticed a group of protesters. They appear to have been protesting cops shooting dogs but I’m not aware of any recent incidents.

There is a theater located in the Walnut Street Parking Garage, Open Stage of Harrisburg. I saw the entrance to the theater right across from the elevator to the parking garage so I snagged one of their brochures and took a picture. It is a strange place for a theater. I wonder where their stage is located?

The second item on my itinerary was the Midtown Scholar Bookstore, a huge bookstore in Harrisburg. I love bookstores! They are usually the first thing I add to my custom travel guides. The Midtown Scholar Bookstore is practically a tourist attraction in its own right since you can find their brochure in some of the state’s interstate rest stops. The Midtown Scholar Bookstore has three or four floors of books. They specialize in used academic books. The selection of local interest books was impressive. I even saw an original edition of Henry W. Shoemaker’s Juniata Memories but it was $70.00. This bookstore has a cafe, a balcony, and plenty of easy chairs and couches. It would be a great place for a writer to hang out. I eventually found two books to buy; Philadelphia Guide to Visual & Performing Arts (a very thin book) and Alternative Japanese Drama published by the University of Hawaii Press. 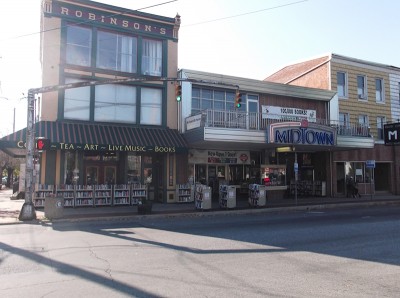 I almost did not have time to visit the National Civil War Museum. It closes at 5:00 p.m. and it took me until 4:00 p.m. to find the place. Fortunately the museum is fairly small and it only took me a half hour to tour the exhibits without really examining every little detail. I almost skipped this museum since it was extraordinarily difficult to find the right streets to the Reservoir Park where it is located. My GPS was being particularly unhelpful and had me driving around in circles. I’m not very interested in the Civil War but the exhibits in this museum were very professional and well designed. I saw lots of pistols, swords, and Civil War uniforms. I bought the book Guide To The Gettysburg Battlefield Monuments in the museum store. I suppose I will eventually visit Gettysburg. 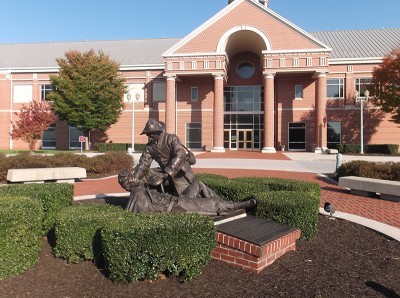 Before I left Harrisburg I spent some time at Reservoir Park. The park is located on a hill and provides an excellent view of Harrisburg. Unfortunately, the sun was low in the sky directly over the city so I didn’t get any good photos. However, the light was excellent for photographing some of the park monuments and statues.

This trip to Harrisburg was a great way to conclude my exploration of my home state. I shall now turn my attention to San Francisco, one of the greatest cities of the United States.