On my last day in Berlin I tried to cram in as many items on my to do list as possible. I had breakfast as usual at Bell Chico. Then I took the U8 U-Bahn line to Osloer Strasse where I transferred to the U9 line. I am rather proud of how I mastered the Berlin U-Bahn. I never got lost or headed in the wrong direction. I took the U9 line to Hansaplatz which is the closest I could get to the Victory Column in the Tiergarten Park. From there I had to walk but fortunately my feet were not bothering me yet. Unfortunately there was a lot of construction going on around the Victory Column and I arrived before it was scheduled to open. I did not see a way to cross the traffic circle. Eventually I saw there is a tunnel but that was covered in scaffolding too. I decided to be satisfied with just seeing the Victory Column close up. I took a few photos and left. 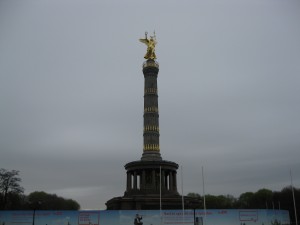 I went to the Kurfurstendamm U-Bahn station and took the U1 line all the way to Gorlitzer Bahnhof in Kreuzberg. I knew which street to go down because I previewed the area on Google Maps last evening. I walked down Oranienstrasse and snapped a few photos of the local stores I found while doing my research, including the famous SO 36 nightclub, sort of like NYC’s CBGBs where Iggy Pop and David Bowie played while in Berlin. But I only went into the NGBK Buchhandlung and bought a small book of photos, Backstage Berlin: A Look Behind the Scenes by Markus C. Hurek . They had a lot of your typical tourist books. 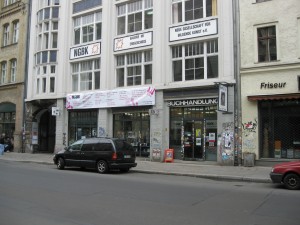 I did not spend much time in Kreuzberg because I’ve read that the locals don’t appreciate the tourist invasion and gentrification. I walked to the Kottbusser Tor U-Bahn station and took the U8 line back to Alexanderplatz.

After resting my feet in my hotel room, I went back to the Schlecker drugstore and bought a small bottle of shampoo because I ran out of hotel shampoo and forgot to pack my own trial size bottle of shampoo. I also bought some proper blister pads.

My final goal was to visit the remaining museums on Museum Island. This was really hard on my feet, but I managed to see the Alte Nationalgalerie, the Bode Museum, and the Altes Museum. At the Alte Nationalgalerie I was thrilled to see several paintings by the Symbolist, Arnold Böcklin, including his Isle of the Dead and The Surf. The Bode Museum contained a lot of sculpture which I was unfamiliar with. The Altes Museum had a fine collection of Greek art including a red figure kylix showing the Oracle of Delphi. I was thrilled to see that because it is used on the cover of a book I read on the Oracle of Delphi, Classical Athens and the Delphic Oracle: Divination and Democracy by Hugh Bowden. In my professional life, Oracle is a database system that answers business queries. All that standing around in the museums kept my feet in severe pain. But I’m inclined to suffer for art. 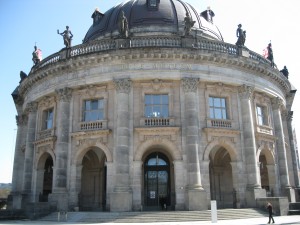 And that should conclude my trip to Berlin. My research really paid off as I managed to pack in quite a lot in just 5 days. In the United States we don’t get much vacation time and a trip to Europe is seen as a major luxury so I didn’t want to waste this opportunity. Now I will always have pleasant memories of Berlin. 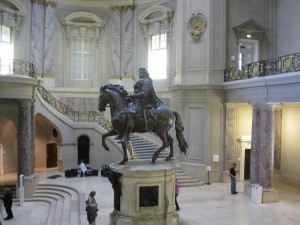 I think I will go to London next year for my next European adventure. It is important to factor the UK into your exploration of Europe because everyone associates English with the UK in Europe. I noticed that the Germans tended to use UK cultural references as soon as I spoke English (pence, lift). Of course, I would probably treat the Swiss the same way because I don’t know the cultural differences between Switzerland, Austria,and Germany. And since I won’t need to learn English to travel to London I can concentrate entirely on the city. Getting the know London better should also clarify many aspects of British comedy, literature, and films which Americans tend to consume lazily without much study of the British culture.