Saturday, September 28, 2019 was the final day of my historic New York City vacation. However, there was a slight problem. An invoice from the hotel was slipped under my door which indicated that I needed to check out that day. My bus ride home would not leave until tomorrow morning. I had to go down to the lobby and straighten that out. Fortunately I was able to extend my stay for an additional day. I didn’t even need to change rooms.

After I had taken care of that problem, I went to Pret a Manger for breakfast. I had a cup of coffee, a parfait berry yogurt, an egg and cheese baguette, and a small bottle of orange juice. I gave a dollar to a homeless man in the restaurant and he bothered me for an additional 10 minutes. After eating breakfast I made another ATM withdrawal at 7:34 a.m. for $80.00.

The hotel mix up and being bothered by the homeless man made me dread having a bad day, but fortunately nothing else happened to ruin my day. My goal for this day was to visit the Hudson Yards development site which now has a shopping mall, a theater, and a tourist attraction. Although I had a ticket to see a show at The Shed, the theater at the Hudson Yards, I intended to see if I could see a matinee of a Broadway show instead. 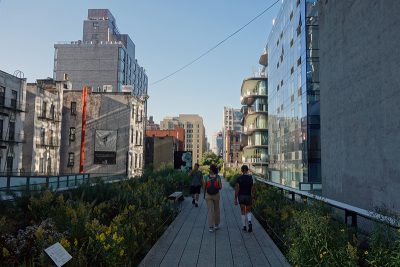 I walked to the Times Square station and took the 7 train to the 34th Street–Hudson Yards Station which was only one stop away.  The 34th Street–Hudson Yards Station is a brand new subway station which looks quite different from other NYC subway stations. I took a lot of photos of the turnstiles, the escalator, and the platform. I took some photos of the Vessel which is a cool attraction that I planned to do later in the day. I found the stairs to the High Line and saw the spur which had a Brick House Statue by artist Simone Leigh. I followed the High Line all the way to its end at the Whitney Museum of American Art. Along the High Line Park I saw lots of condos with interesting architecture like the 520 West 28th Street condos by Zaha Hadid Architects, the 512W22 Office Building, and the Lantern House by Heatherwick Studio.

I located the Twitter headquarters on West 17th Street but it was covered by a sidewalk shed. So I went to the 18th Street Station entrance for the 1 train and took it uptown to the 50th Street Station. At 10:00 a.m. I went to the the TKTS Booth and bought a ticket for the matinee performance of Beetlejuice, the musical. Seat H 114 for $109.20. This turned out to be a pretty good seat. This was the very first time I bought a ticket at the TKTS Booth. It turns out that you can only buy tickets for the day of the performance. 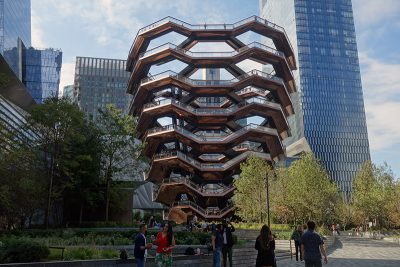 After getting that taken care of I retraced my steps to return to the Hudson Yards neighborhood. I added value to my MetroCard in the amount of $20.00 because my 7 day pass had expired. I presented my printed ticket for the Vessel and climbed the stairs to the topmost level. I took photos of the interior, the skyscrapers, people around a hotel pool that was visible from the Vessel, and the trains in the train yard. I thought it was a pretty cool experience and not too tiring even with all those stairs. 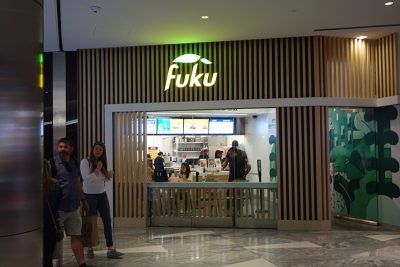 I went into the Shops & Restaurants at Hudson Yards and ate lunch at Fuku at 11:53 a.m. I had the Finger Sando Meal with Waffle Fries and a large strawberry slushie which was difficult to drink through a straw. I checked out a few stores but most of the clothing stores were too high end for my budget. The b8ta store sold electronics and gadgets which did tempt me a little.

Not long after eating lunch I took the 7 train uptown to Times Square station and walked as fast as I could up to 50th Street to the Winter Garden Theatre. I stood in line with my ticket until about 1:25 p.m. I bought a souvenir cup of wine for like $27.00 which was outrageous. They even made a joke about the expensive wine during the show. The white wine made me a little bit tipsy and I did not bother to get a refill during intermission.

I was supposed to see Arca Epilogue: Boundary at The Shed at 2:00 p.m. but I ditched that because it struck me as being intended for a youth audience. It was also going to go on for five hours and they insisted on locking up your smartphones in a case. I also don’t think there would have been any seats so I would have been standing for five hours. I only paid $15.00 for a ticket to that so I think I made the right decision to do something else instead. 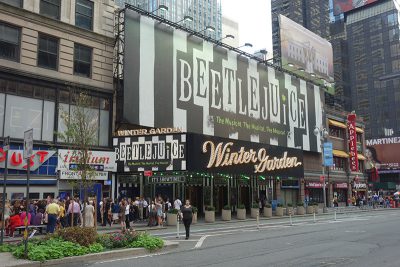 Beetlejuice at the Winter Garden

Beetlejuice, the Musical was a fun show. It was like being in a goth fun house. I don’t know why I didn’t realize that this show would be ideal for me when I was planning my trip. I have not seen the movie in ages so it was very nostalgic for me. The show featured special effects like fog and lightning and it used giant puppets. Beetlejuice was almost good enough to inspire an infatuation in me.

After the show I returned to my hotel and then immediately went out to Duane Reade to buy a bottle of Starbucks Frapacino Vanilla for $3.79 because I was very thirsty. In fact, I only bought the wine at the show because I was so thirsty.

After that I took a long walk along West 50th Street to the Rockefeller Center. I took photos of; Radio City Music Hall, St. Patrick’s Cathedral, the Atlas sculpture, Villard Houses, St Bartholomew’s Church, the MetLife Building, the Seagram Building, the Grolier Club, French Institute : Alliance Française, the Plaza Hotel, the Sherman Memorial, and the Apple Cube. It had been a long time since I had walked that far east in MidTown Manhattan.

I stopped in at a Central Park South Pret a Manger and ordered a Honey Banana Bowl and a can of Blood Orange Soda at 6:40 p.m because I was thirsty. By 7:00 p.m. I was back in my hotel room. I would have gone back out to experience Times Square at night but I’ve seen it so often that I didn’t feel the need to eek out anything more from my trip.

With this vacation, I think I have finally had my fill of New York City. I have another day trip scheduled for October 26 but after that I shall focus on a new city. For my next major trip I’m thinking of returning to Europe, Amsterdam or maybe Dublin, but first I have to get my passport renewed.