Yesterday was a beautiful sunny day so I decided to get out of the house for the day. But I did not want to spend a lot of money so I relied on my previous experience to put together a cheap day trip. First, I drove to Eagles Mere which is a small village in Sullivan County. I often visit Eagles Mere on my way to Worlds End State Park. There is not much to do in Eagles Mere except to visit the book store and the sweets shop. Fortunately, the book store was open but the sweets shop was closed. At the Eagles Mere Bookstore I bought the paperback book Medea and Other Plays by Euripides, Penguin Classics. I selected this book because I’ve been reading multiple translations of Euripides’ The Bacchae and thought it would be useful to read some of his other plays. I was tempted by a large hardcover book Madame Sarah by Cornelia Otis Skinner, a biography of Sarah Bernhardt, but I was reluctant to commit to reading a long book. Now I kind of regret not buying that book so I may buy it later.

Since The Sweet Shop was closed I decided to spend a little time exploring Eagles Mere just to make stopping there worthwhile. I went into the park to photograph the gazebo and then walked down one side street, Jones Avenue, to takes photos of the Eagles Mere Post Office. I noticed a large blue house which was being remodeled. It was big enough to be a hotel. I don’t know if I’ve seen it on previous trips. It may have been obscured by more trees and landscaping. At the end of Jones Avenue I saw the Episcopal Church and two benches overlooking a field. There was a bit of a vista view there so I walked over to the benches. I saw a strange sight in the grassy field below, a vintage pickup truck stuck high on a pole. It looked like somebody’s idea of art work, a sculpture. The residents of Eagles Mere are very wealthy as evidenced by the splendor of their summer homes. This statue was down the hill from a particular large and fancy ranch house so it may have been artwork on the grounds of this country estate. Nobody was in sight so I walked down the hill to take a few closeup photos. 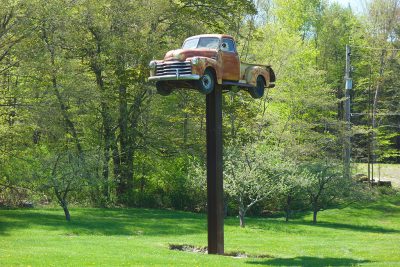 After that I proceeded to Worlds End State Park. I didn’t intend to do any serious hiking. First I stopped in a pull off near the Loyalsock Creek to take some photos of the boulder strewn creek. I saw a pure white piece of quartz rock which I took as a souvenir. Most of the rocks are unremarkable but this one looked like a chunk of ice, rough but with no blemishes. Then I pulled in at the parking lot for the Canyon Vista Trail trailhead and walked a short ways on the trail along the creek. This part of the trail is perfectly flat and goes through some thin woods. It was very tranquil and relaxing without required much physical effort. Next I drove to the main parking lot and used the restroom. Unfortunately the Snack Shop was closed, maybe because it was Mother’s Day. There were surprisingly few people in the park, probably because it was Mother’s Day. Ordinarily, the parking lot would have been full on such a nice day. I walked down to Loyalsock Creek and shot lots of photos of the cliffs and the boulders in the creek. This is the most picturesque place in Worlds End State Park. It is also the area with the most picnic tables and camping grounds. Before leaving the park I checked out the beach area and walked across the bridge to find a trailhead for the High Rock Trail which I did not know was there. The High Rock Trail is a very difficult trail according to the warning sign so I was not tempted to try it. 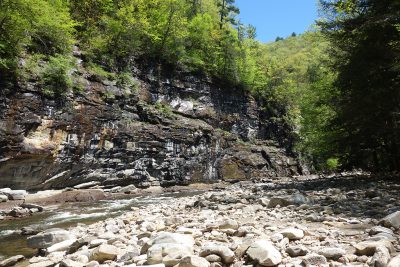 On the way home, driving south on Route 220 I made two further stops just to avoid ending my adventure too quickly. First I stopped in at D&D Brew Works. This is a restaurant and bar located in a large red building which I have not seen in operation on previous trips. I ordered a coke, a grilled cheese sandwich, and some French Fries. This meal cost less than $10.00. A but further along Route 220 I drove to the Overlook and checked out Wrights View. This vista overlook is nothing fancy and the view was not particularly fantastic but it is the sort of humdrum attraction that feels authentic. 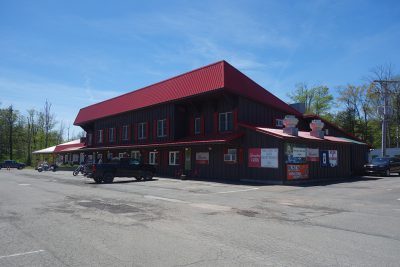 My final stop on the return trip home was Walmart in Montoursville where I bought a new dress shirt and two inexpensive DVDs, Tomb Raider and Murder on the Orient Express. Both of these films are newer versions of the old classics. I bought a new dress shirt for my upcoming trip to New York City because I want to look presentable for dinner at a good restaurant where I have a reservation.

When I got home I dragged out my bike for a long ride along the bike path, aka the Lycoming Creek Bikeway. I rode all the way to the end of the bikeway in Hepburnville. This bike path can be found at the end of my street but I usually access it by going to the end of the gravel lane behind my house. The bikeway is somewhat scenic although I think it could be better since you mostly see nothing but grassy fields along a long stretch. The best part is the railroad bridge over Lycoming Creek. For me it is a very convenient recreational activity and it would probably add a lot of value to my property if I lived near a bigger and more prosperous city. 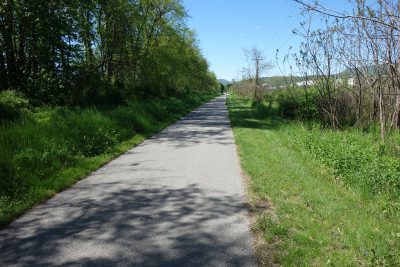 In conclusion, I enjoyed a perfect Spring day without spending a lot of money.