For my latest trip to New York City I decided to focus on exploring the Lower East Side. Although I have been in that vicinity before, I never realized how many art galleries and rock music venues are located in that neighborhood. Fortunately my exploration of New York City has gone beyond the major tourist sites phase and now I can dig below the surface and find unusual establishments to visit. Instead of getting to know the city in broad strokes I can now get into the details. Increasingly my trips to the city are tailored to my special interests and serve my broader goals.

While walking through Times Square I saw a strange sculpture featuring a figurehead of 19th century opera star Jenny Lind with whale ribs. Apparently it was put together by UNC Asheville engineering students and one art student to make a statement about climate change. I also saw the Naked Cowboy doing his thing in Times Square. I walked to Bryant Park to take a F train downtown to the Second Avenue Station. But before I could do that I had to put more value onto my MetroCard. I mailed my expired MetroCard to MTA and got a green card back with just 44 cents on it. I spent more than that on the postage! Out of frustration I insisted on putting more value on this card instead of getting a new one. Fortunately this operation went very smoothly.

The Second Avenue Station put me on West Houston Street, the northern boundary of the Lower East Side. I had a long list of art galleries to visit but ultimately I only ventured to enter one. Mostly I just located various establishments in my notes and took photos of the exteriors because I had found them poorly documented on the Internet. This is kind of lame but I wasn’t feeling too adventurous. Unfortunately I had not worked out a route to take me through the neighborhood so I proceeded in a very haphazard manner. The following is roughly the order in which I encountered my target establishments; The Box on Chrystie Street, Le Turtle, Russ & Daughters, Bitforms Gallery next to the Church of Grace to Fujianese, Tinkersphere (not on my list, but interesting), Bluestockings book store, Katz’s Delicatessen, Dirty French, Arlene’s Grocery, the Tenement Museum, Blue Moon Hotel, Castle Fitzjohns Gallery, Art d’Aurelle, Lesley Heller, Mama Spa, Rockwood Music Hall, the Mercury Lounge, Souvlaki GR, Clayton Gallery and Outlaw Art Museum, Parkside Lounge, Dixon Place (a theater), the New Museum, and Sperone Westwater. Finding all those establishments took a lot of time, from 10:53 a.m. to 12:36 p.m. and had me crisscrossing the neighborhood several times. The only place I actually visited was Bitforms Gallery which specializes in art created though technology. I watched quite a bit of a video at this gallery but there wasn’t much to see. I’m starting to develop a feel for art videos because they tend to be in the same style. This one used a vague narrative that seemed deliberately cryptic yet bland, the same tactic used by modern poetry. 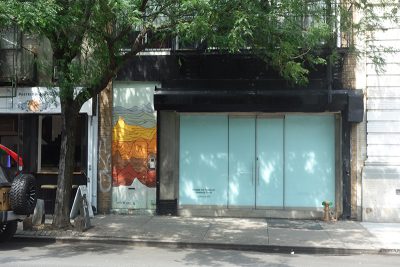 At around 12:30 p.m. I made my way up the Bowery and crossed West Houston Street. I stopped to take some photos of the Blondie mural which was still up and turned left onto East 4th Street to reach Lafayette Street to walk past the Public Theater. The play I was to see at the Public Theater did not start until 2:00 p.m. so I stopped in at Starbucks for an iced coffee. I was really stressed from the heat so I definitely needed something to drink. I also wanted some caffeine before seeing the play to prevent me from nodding off. Since I still had plenty of time I walked further up 4th Avenue until I came across Gothic Renaissance when I realized I must be close to the Strand Bookstore. I was tempted to stop in at the Strand but I didn’t want to miss the play so I walked back to the Public Theater. Outside the Public Theater I saw a tall, elderly man in a wheelchair. This gentleman looked a lot like Charles L. Mee, the famous playwright, but I didn’t speak to him so I can’t be sure. It would make sense for Charles L. Mee to be at the Public Theater. Across the street I noticed a banner for Playwrights Downtown which was a mystery to me. This is two floors of space at 440 Lafayette Street which is used for playwrights rehearsal studios. 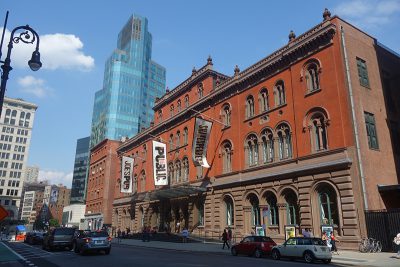 The play I saw at the Public Theater was Cyprus Avenue by David Ireland. What a name! The play was all about Ireland. David Ireland is a Northern Irish-born playwright and actor. He is entitled to say “I am Ireland”. This play starred the Irish film and stage actor Stephen Rea. I’m familiar with him from the film Interview with the Vampire. Ironically this film is actually mentioned in the play which must seem weird to Stephen Rea. Cyprus Avenue was supposedly a shocking play that audiences could barely stomach but I thought it was really tame. The murders were not done very convincingly and the blood was nothing more than some carpet stains being spread by some curious devices. I guess this play was meant to be in the In-Yer-Face tradition but I was not impressed. I choose this play because I’ve been interested in Irish Theater for awhile. The Irish Repertory Theatre wasn’t doing anything I wanted to see.

After the play was over I walked back to the Lower East Side and took photos of more establishments until 5:00 p.m. when I had a reservation at Souvlaki GR. I took photos of Van Der Plas Gallery, Economy Candy, Benjamin’s Art Gallery, Remedy Diner, and the Angel Orensanz Center. One of the establishments I was unable to find was The Slipper Room, a burlesque club which I assumed had closed. Now I can see online that it was located next to the Pizza Beach restaurant but all there was to see was a door so naturally I missed it. At Souvlaki GR I ordered the Loukaniko Pita which is Greek sausage wrapped in a pita, and a lemonade soda which may have been a Greek product. This meal was very affordable and came to less than $20.00 even with a generous tip. After I was finished eating I went back to Economy Candy and bought some Edgar Allan Poe Candy and a tin of New York After Dark chocolate by Astor Chocolate. I figured the tin would make a nice souvenir since it features a photo of Times Square. I also located and entered the Canada Gallery but they don’t appear to have anything on the walls so I only popped in for a brief minute. 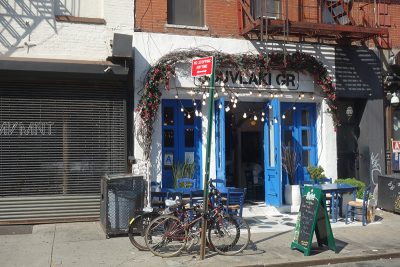 After that I retraced my steps up the Bowery (which is the name of a street) and up Broadway until I reached the Strand bookstore. At the Strand I had my heart set on plays by Jean Racine because he is mentioned in a book on tragedy which I am reading. However there were not many books by Jean Racine so I settled for Shining City by Conor McPherson. I also looked for some fiction titles on my shopping list but I could only find The Imago Sequence and Other Stories by Laird Barron. From the Strand bookstore I walked to Union Square Park where I took an N train to get to 42nd Street Times Square. For the rest of the evening I just wandered around Times Square checking out what was playing at the Broadway theaters. During this time I reflected that I should fulfill my responsibilities to my artistic vision and not stress over how the theater community is not meeting its responsibilities to artists. Inspiration creates a heavy responsibility because you are given visions of great beauty which will not come to be if you neglect your duty. The theater community in turn has a responsibility to visionary artists. However, if they fail to do their duty then that is on them, not you. 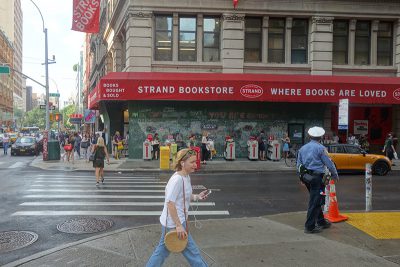 The bus was unable to leave New York City until 8:30 p.m. because an elderly woman failed to show up at the pick up spot. They contacted her via cell phone but they had a hell of a time directing her to 8th Avenue and 51st Street. Eventually she managed to get a cab. There was some talk of putting her on a Do Not Ride list which alarmed me because I didn’t know Susquehanna Trailways could refuse service. I’ll have to be more careful to show up at the pickup spot myself. On the long bus ride home I felt a real rush of inspiration which reminded me of what that feels like. I was reminded that nothing the theater community offers could compare to what I already possess. There is something peculiar in how the world inspires me which creates wonder for me but which cannot be invested into anything.