This weekend I made my first overnight trip to New York City making all the arrangements myself. An overnight trip is far more expensive than a day trip, but I had to make this type of trip to see the play I wanted to see. I learned a lot about this alternative way of traveling to New York City. It should prove useful for the future. Actually there was nothing terribly different about this trip. I just used the regularly scheduled Susquehanna Trailways bus service to New York City instead of going on a special tour. However there were a few changes in the procedure which are worth noting. I should mention that I left on a Friday and this was possible because Pennsylvania has not passed the state budget. My hours have been reduced at work so I have extended weekends. This gives me the opportunity to make worthwhile weekend trips.

I was able to order my bus tickets online and print them out at home. Although these tickets have a bar code and a QR code, it was still necessary to hand the bus driver the printed tickets. This is important to note because although I had images of the tickets in my notes on my smartphone as a backup, that would not have sufficed since the bus driver cannot scan the tickets. I had to switch buses at Lehighton, a small city near Jim Thorpe. There isn’t a proper bus station in Lehighton. The buses just park in front of a small park. When you need to transfer to another bus, hand the driver both tickets when boarding the first bus. My luggage was transferred from one bus to the other. I saw the Church Street Station in Hazleton and the Easton Bus Terminal. It was interesting to be driven through those cities because I have not explored them yet as part of my grand tour of Pennsylvania. The bathroom in the Easton Bus Terminal is a single occupant bathroom, although I did not learn that until my return trip. It took five or six hours to ride the bus to New York City because the regular bus service stops at a lot of cities on the way and does not take a very direct route. Therefore it is important to note when and where you could take a bathroom break.

The bus took me to the Port Authority Bus Terminal. This was the first time I’ve been inside the Port Authority Bus Terminal, even though I’ve seen the exterior many times. Finding my way around the interior was another learning experience. Susquehanna Trailways appears to always use Gate 2 which is on a lower level. I didn’t really exit through the terminal. Instead I found my way to the streets by cutting across the bus lane.

I had booked two nights at the Skyline Hotel. This is the same hotel that Susquehanna Trailways uses on its overnight New York City trips so I knew it was affordable and a quality hotel. Plus it is in the Hell’s Kitchen neighborhood so I knew where it was located. There are actually some other inexpensive hotels right next to the Port Authority Bus Terminal which I may try on a future trip. As it was, I had to drag my luggage for seven blocks! Fortunately that was not too bad and only took me 15 minutes. I saved money by not taking a taxi. I added a help topic on Tenth Avenue to my notes and really improved my knowledge of the Hell’s Kitchen neighborhood. I also took a lot of photos to improve my notes. Hell’s Kitchen is to the west of the Theater District so I’m always straying into it. 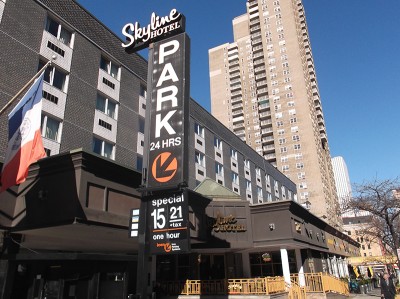 After checking in at the hotel, room 737, my first priority was to have lunch since I had not eaten anything during that six hour bus ride. I found my way to the Obao restaurant on 9th Avenue. This Thai restaurant was highly recommended online and their prices were comparatively low. I ordered two appetizers and a glass of Thai Iced Tea for less than $25.00. The crispy pork belly was insanely delicious! The spare rib on sugarcane skewer was also extremely delicious, especially if dipped in the peanut sauce. Even the Thai Iced Tea was better than expected. It tasted like a Starbucks frappuccino only not as sweet. Obao will definitely be my first pick for an inexpensive restaurant on all future trips!

My second goal was the obligatory visit to the Drama Book Shop where I splurged on five books:

These books were all thin actor’s editions or single plays so they didn’t take much room in my luggage although I could have carried more than the usual amount of purchases home. I bought the Topdog/Underdog by Suzan-Lori Parks script in order to participate in the online conversation at the Reddit Play Club. Neighborhood 3: Requisition of Doom by Jennifer Haley was actually the play I was going to see that evening. 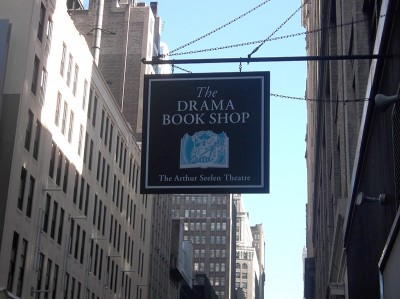 I returned to my hotel room to drop off my books. That is what I like about having a hotel room. On a day trip I would have had to carry those books everywhere for the rest of my trip. My next destination was the Whitney Museum of American Art. I had to rush through the museum on my last trip to New York City so I decided to kill some time by revisiting the place at my leisure. I only had to repeat the subway ride from my previous trip. I did add $20 value to my Metro card to last me for this two day overnight trip. While I was in the Meatpacking District near 14th Street, I managed to locate Google’s New York office and the Chelsea Markets. As before, the key to getting oriented to find the Whitney Museum of American Art was to locate the High Line and follow it downtown. I was a bit early for my 3:00 p.m. timed ticket so I sat on a chair outside the museum. They conveniently had some chairs arranged on the patio. Once inside the museum I made sure to visit all the floors which had art exhibits and I ventured out on all the terraces to take photos of the New York City skyline. The terraces of their new building are a major part of this new attraction. There is a lot of interesting architecture in view including a large water tower. Nevertheless I only spent an hour there. 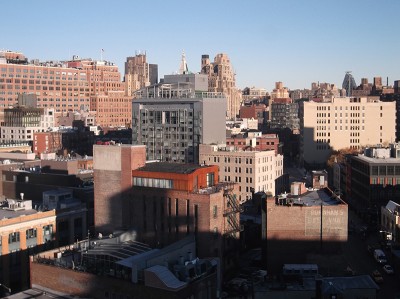 From the Whitney Museum of American Art I walked east to Union Square Park in order to take the N train downtown to Tribeca. But along the way I came across The New School which has completed their new building. I remember seeing a conceptual drawing of this new building but I never realized it was built so now I must update my notes. I needed to be in Tribeca to see a play at 7:00 p.m. In order to make this expensive trip as worthwhile as possible, I bought tickets for three shows. I could see two shows on Saturday by attending an afternoon matinee. Since I usually make day trips this was a rare chance to see an evening performance at the smaller theaters. Actually I would have picked something on Broadway but the ticket prices were outrageous. At their most expensive, Broadway tickets used to be $150 for a good seat at a hot show but now a ticket can cost as much as $375! I could not afford to see three plays at that price. So I choose two Off-Off-Broadway plays for a more reasonable ticket price. On this trip I was able to check out two Off-Off-Broadway theaters which I frequently hear about.

This evening’s show was Neighborhood 3: Requisition of Doom at The Flea Theater. This play was written by Jennifer Haley, a Los Angeles based playwright I had already come across while planning my trip to Los Angeles. I’m still planning that future trip. Unfortunately I arrived in Trebeca very early so I had to kill some time by drinking a coffee at a Starbucks. I needed some coffee to keep me awake for the play. It is not that I find these plays boring, but getting up early to make a bus trip to New York City is very tiring and I immediately want to sleep upon entering a dark theater. It is so tempting! While drinking my coffee I noticed a wireless charging powermat. You just plug your device into a Duracell Powermat ring and place the ring over a powermat. Your device then begins charging. I was able to charge my smartphone a bit while I was drinking my coffee! But I was still too early for the play so I went to a Pret a Manger food chain store and selected some gourmet items for a meal. I’ve never been to a Pret a Manger before and it seemed a better option than a fast food place like McDonald’s or Burger King which I passed. I had a slim chicken Caesar with bacon, a smoked ham and egg salad sandwich, some honey banana yogurt, and a lemon and lime soda. That meal cost me less than $20.00 and took a good while to eat. I also used the rest room before I left. I had to enter a four digit number to enter the single occupant rest room. This is worth noting because I have Pret a Manger food chain stores in my notes as having public rest rooms but this seems less than ideal. 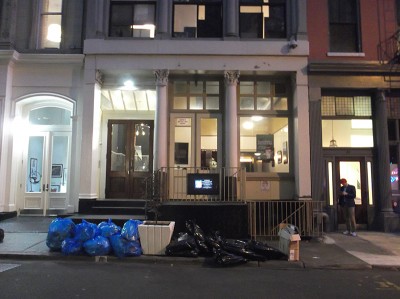 The play was pretty interesting if you are a nerd. It is sort of inspired by text-based adventure games for the PC or online role playing games. The computer game, Neighborhood 3, uses GPS maps based on your real neighborhood and eventually the game play spills over into real life. The characters begin to kill their parents who are represented as zombies in the game. I would have thought this a dumb idea for a play but the trick is in the execution of course. You can write a decent play based on popular culture as long as it is well written, but I would avoid doing so because the concept might get your play dismissed out of hand. There were very few stage props and the stage set itself was very minimal with just a backdrop that curved upwards from the floor. It basically looked like a cheap community theater production. However, the acting was definitely better than average. I thought the play was an excellent example of theater finally beginning to acknowledge contemporary life which is heavily influenced by technology. The theater will have to deal with our addiction to technology to accurately reflect contemporary life and to appeal to a contemporary audience. You mostly see this in the use of cell phones in new plays. Characters are always on their cell phones in some plays just like real life people are always on their cell phones. Personally I am not always on my cell phone so I don’t create characters with the habit. One of the things that got a big laugh in this play was the actor’s AFK performance (away from keyboard). He swayed in place like a Second Life avatar and the hip audience roared with laughter over this clever reference to that ridiculous action.

After the play I took the subway back uptown to my hotel. I made sure to visit Times Square first since I can never resist seeing that spectacle at night. This was really just a half a day in New York City since I arrived at approximately 1:00 p.m. But since I was able to stay until late at night I managed to fit in a typical day trip’s worth of activities. I still treat every trip to New York City as a special occasion to be enjoyed as fully as possible.