Philadelphia is the cultural capital of Pennsylvania. I had an extended weekend so I decided to make a long overdue trip to Philadelphia to experience some world class theater. It has been three years since I last visited Philadelphia and there have been some major changes to the city. The night before I left, I finished reading The Philadelphia Connection: Conversations with Playwrights by Betty Jane Burton. This is a collection of interviews with Philadelphia’s playwrights. I figured it would be a good introduction to the movers and shakers of the Philadelphia theater scene. The cover features a great photo of the Avenue of the Arts (aka Broad Street) which is the Broadway of Philadelphia.

I usually drive down to Philadelphia which takes four hours. I usually stay overnight since I don’t want to drive four hours twice in one day. Since I had Friday off I was able to spend two nights in Philadelphia. I did encounter a traffic jam on Interstate 80 near the Milton Travel Plaza due to a traffic accident. Other than that the trip went very smoothly. I stayed at the Sheraton Philadelphia Downtown Hotel. On previous trips I preferred the Holiday Inn Historic District hotel but it has become more expensive. That hotel is also located further away from the Avenue of the Arts where all the theaters are and the Benjamin Franklin Parkway where all the museums are located. I parked in the underground parking garage of the Sheraton, parking level 2 section 6F. I took a ticket but in fact you use a room key when you leave, not the ticket. There was a separate elevator from the garage to the lobby of the hotel. It let me out right next to the concierge desk. I’m describing everything in case I want to use this hotel in the future. My room was on the 9th floor. The nice thing about a road trip is that you can bring as much luggage as you like in your car and bring back as much stuff as you like. But I packed light since I was only going to be in town for a few days.

After dropping off my bags in my room, my first goal was to visit the Rodin Museum. This museum has been on my to do list for a long time. The Rodin Museum is a fairly small museum filled with bronze statues by Auguste Rodin. I’ve seen his work in New York City (at the Museum of Modern Art), in Washington DC at the Hirshorn Museum Sculpture Garden and even in Paris when I came across the Monument to Balzac. However I did not visit the Musée Rodin. I paid $10.00 to visit this museum but you could actually pay what you wanted. I waited around until noon for a guided tour. There were a lot of young art students wandering around the galleries drawing the sculptures. The students may have been from the University of the Arts which had a lot of campus buildings in Center City. 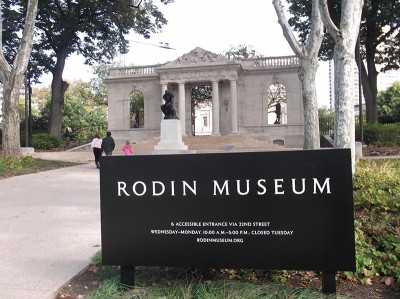 I found the Book Corner near the Barnes Foundation museum. This used book store is run by the Friends of the Free Library of Philadelphia. I bought a copy of the Dramatists Sourcebook, 25th Edition. I didn’t really need this book since I have a newer edition, but I wanted to make this trip a dedicated theater excursion. I returned to my hotel to drop off the book and to drink a little water. Then I headed back out to walk down the Avenue of the Arts so I could take photos of all the theaters on Broad Street. This was also my first opportunity to see the new Dilsworth Park which has replaced the Dilsworth Plaza on the west side of City Hall. Philadelphia has completely redesigned this area and it was one of the big changes I wanted to check out. The most striking change was the clear glass headhouses that serve as the entrances to SEPTA transit lines. I walked into the City Hall courtyard and discovered some SEPTA Broad Street Line entrances there for the city office workers. I never knew those existed.

I didn’t really need to photograph everything along Broad Street since I’ve done that on previous trips to Philadelphia but I figured I might get better photos on these bright October days. I particularly wanted to get a lot of photos of the Suzanne Roberts Theatre and the Wilma Theater where I was going to see shows.

My next goal was to explore Chinatown and have lunch at a Chinese restaurant. Philadelphia has the only Chinatown in Pennsylvania. After seeing San Francisco’s Chinatown earlier this year, I was more interested in the one in my home state. I had lunch at Sakura Mandarin on Race Street which seems to be popular with the local Chinese. I ordered the Seafood Delight which was vegetables and seafood in a sauce. It was very hot and I thought it was pretty good. I was glad it came with a fork and spoon because I was worried I would have to use chopsticks. I still have not learned how to eat with chopsticks! I also drank a glass of ice water and some tea because I was dying of thirst.

Next I walked all the way down Race Street trying to find the Race Street Pier but first I encountered Elfreth’s Alley, the cobblestone lane of Colonial houses. I stopped to wander down the lane with the other tourists since I was there. Actually before that I walked pass the new Metroclub Condominiums, a very modern building with a rounded facade and the United States Mint which I should add to my notes. My main interest in this part of the city was the new FringeArts building across from the Race Street Pier. FringeArts is the Philadelphia Fringe Festival which seems to have become a permanent institution with activities year round. My second trip to Philadelphia way back in 2002 was just to see the Philly Fringe Festival. There is also a restaurant, La Peg, located in the FringeArts building but I wasn’t hungry after eating in Chinatown. I got a great view of the Benjamin Franklin Bridge from the Race Street Pier. This was the second big change to the city that I wanted to see. The FringeArts building and the Race Street Pier did not exist three years ago. Please note that I had walked clear across Center City at this point. 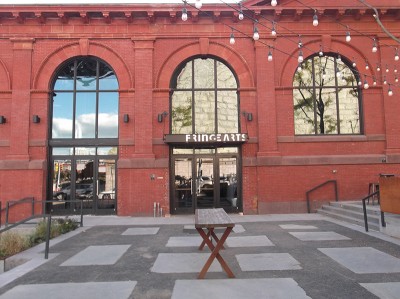 I walked a little bit in Old City and found the Arden Theatre Company and The Book Trader. I did stop in at the Book Trader because I cannot resist a bookstore. I bought two books of plays to continue my theater focus for the trip. I bought The Miser and Other Plays by Moliere and The Complete Plays of Joe Orton.

As I headed back toward City Hall, I passed and photographed the Benjamin Franklin Museum, the Ritz movie theater, the National Museum of American Jewish History, and finally Independence Park where I did slow down to take photos of Independence Hall and the Liberty Bell through the window of its building. I did not actually get in line to see the Liberty Bell. Eventually I walked all the way back to Broad Street where I took even more photos of the cultural establishments concentrated along this street. By this time I had sore feet so I returned to my hotel to rest until the evening’s big event.

On Friday evening, my first night in Philadelphia for this trip, I saw the play Disgraced by Ayad Akhtar. This play won the Pulitzer Prize for Drama in 2013. The Pulitzer Prize is probably the major award for a serious play. The play was put on by the Philadelphia Theatre Company at the Suzanne Roberts Theatre. I’ve been to this theater before on July 9 , 2011 to see the one man show Long Story Short by Colin Quinn. 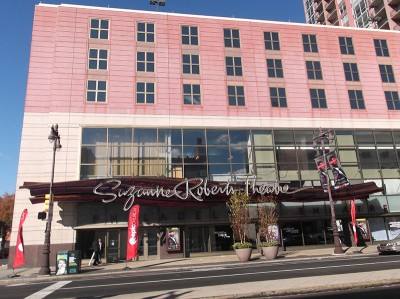 The theater was half empty for this play. I was the only person sitting in my row and all the rows behind me were completely empty. I was seated in the mezzanine, or balcony, so I was looking down at the stage from a distance. This seat was cheaper, only $36.00. I thought the set design was very impressive. It looked exactly like a fancy New York City apartment with a small patio. The play was a realistic drama about young professionals, including a Muslim lawyer who hates Islam. He gets in trouble with his law firm for appearing to defend an imam arrested for contributing to a terrorist group.

I did not go anywhere for diner after the show. I did buy a bottle of coke from the vending machine in my hotel. I really like vending machines in hotels. They are better than minibars in your room with outrageously expensive items. I did have to swipe my credit card to buy the soft drink since the vending machine would not accept coins or bills. I also had to pay for an hour of Internet time to check my email and post some photos of social media web sites.

In conclusion this was a good half day in Philadelphia. I had visited an art museum and saw a play. This satisfied my need for a little culture but tomorrow would be even better.