Today I visited a small, abandoned park in Clinton County. Clinton County is to the west of Lycoming County. There are a few state parks in Clinton County which I plan to visit. I will also explore Bellefonte and State College in Centre County but that is probably as far west as I will go. Zindel Park is located near McElhattan. I actually found the road to this park last year when I located Henry W. Shoemaker’s old estate, Restless Oaks. You just take the McElhattan exit going west and make a left turn to go under the highway overpass. Then keep going straight along the road with the No Outlet sign. Go as far down this road as you can until you reach a parking area with a gate preventing entry onto the road to the Keller Reservoir. From there you have to hike along the reservoir road to reach Zindel Park. There is also a small gate over a small bridge that you have to climb through. 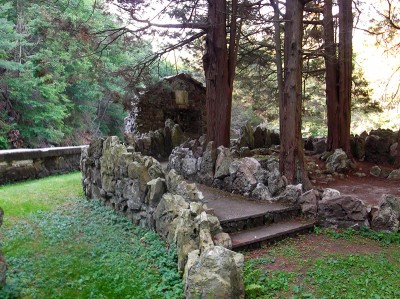 Zindel Park is a very small park with interesting stone monuments, stone bridges, a waterfall, a small lake, and a small house. It looks like an elaborate private estate since the grounds are not very extensive. It was created in 1929 and then abandoned in 1954. But since the park is in the City of Lock Haven Public Water Supply Area it has not been left to fall into ruins. I thought it was pretty cool, sort of a secret place only known to local residents. 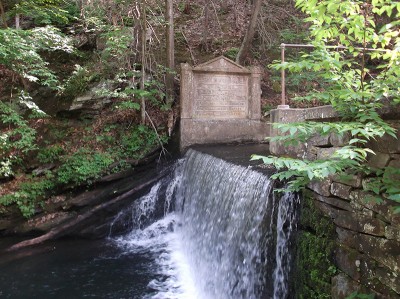 The reservoir road seemed very popular with joggers and hikers. I saw quite a few people on the road. I only found two hiking paths. The Goat Path was a steep uphill climb but I did enjoy the view and it leads to an interesting cliff with a lot of exposed rock. Eventually this trail became so steep that it was almost a vertical climb so I turned back. At the end of the reservoir road I found a trail to Kellers Bench, whatever that is. This trail began with a very steep uphill climb that left me completely exhausted. But eventually the trail leveled off and followed the reservoir road through the woods above the road. I got tired of this trail and cut through the woods at a place that seemed relatively close to the reservoir road. 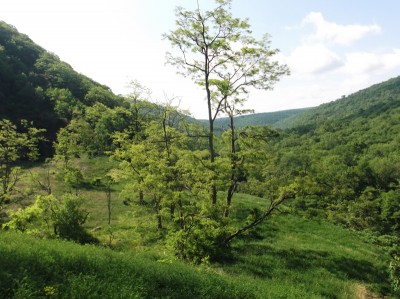 The bugs were a big problem on this hike. They really plagued me. Later on in the day I bought some bug spray to keep in my backpack.

When I got back to Williamsport I did stop downtown to check out a restaurant. I had lunch at Joy Thai Cuisine. Lots of people think this is the best restaurant in Williamsport, although I think the relatively new restaurant Sticky Elbow might be quite good. I was inspired to check out Joy Thai Cuisine by my trip preparation for San Francisco. There will be a Thai restaurant near my hotel where I will probably eat often. I ordered the Seafood Jungle which was shrimp, scallops, mussels, and other seafood with vegetables in a curry sauce. This came with a small bowl of rice on the side. The service was prompt and efficient. I think I might eat here again since there are few ethnic restaurants in Williamsport. Having lunch at a new restaurant made this seem more like a real trip than just a staycation.