On Saturday, August 27, I made another trip to the Reading area. My goal on this trip was to see the famous Reading Pagoda and to check out the Goggleworks Center for the Arts. I have been wanting to do this for years, but never got around to making the long drive down to Berks County. Although I was planning to do a mini-vacation in Reading PA, I don’t think I can afford to do that now. A day trip was sufficient to see these two attractions. I also spent some time wandering around downtown to take some photos.

I had no trouble on the drive down to Reading except for missing a turn on PA 901. I stopped in at a Sheetz to use the restroom and get a bite to eat. I bought a small ham sandwich. I was then able to get back on PA 901. Once I reached Reading I followed my directions to drive through downtown on Penn Street to Perkiomen Avenue. There I found Hill Road and drove up the mountain to the Pagoda. Fortunately there was a car going the same way which I could follow. There are no signs directing you to the Pagoda. 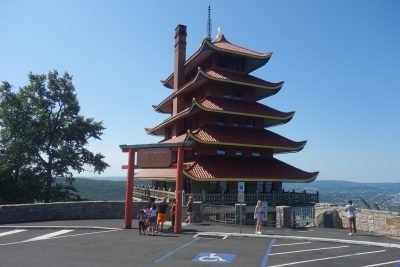 The Reading Pagoda was closed but you could walk around the veranda and see the view of the city. There were a few other tourists there. I took lots of photos. I did not spend much time there. I did not manage to go back down the mountain quite the same way and had to drive through a narrow street with cars parked on both sides of the street. But eventually I found my way to Washington Street which I followed west to reach North 3rd Street. There I found the parking lot for the Goggleworks Center for the Arts.

The first thing you see when you enter Goggleworks is the gift shop. I did not buy anything here because the prints were crazy expensive, like $125. I saw two galleries and then used the restroom. Then I went to the elevator and explored the other floors. There are five floors. I did not find any more art galleries but I did see many artist studios. Some were empty and a few had artists working inside the room. Lots of art work could be seen along the hallway walls. It was quite similar to the Pajama Factory in Williamsport. On the top floor, the 5th floor, there were offices for various arts organizations. I also saw some dance studies for ballet. The only interaction I had with anyone in Reading was with some people in the elevator. I told them I was just a tourist from Williamsport and they expressed surprise that anyone would want to visit Reading PA. 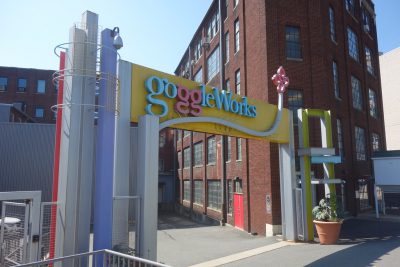 After spending only an hour or less at Goggleworks I spent the rest of my time walking around downtown Reading PA. I walked all the way up Penn Street to North 10th Street so I could find the Genesius Theatre. From there I walked to Washington Street which I followed back to the Goggleworks parking lot. I could have spent more time exploring the downtown area but it was very hot and I saw most of what I wanted to see. Technically I never did finish my research for this trip. 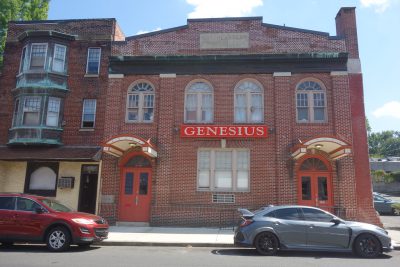 Reading PA has a large Spanish speaking population and I saw some evidence of that. The signs in Goggleworks were also in Spanish. I saw a group of people surrounding someone speaking Spanish in a megaphone. I assumed this was a small political rally. And I saw many Spanish establishments which make Reading PA look like Spanish Harlem in New York City. Unfortunately my Spanish still isn’t good enough to embolden me to enter a Latino establishment. 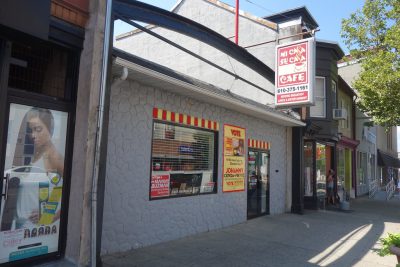 Before going home I went to the Barnes & Noble store in the Broadcasting Square Shopping Center and bought two books in Spanish; Poesia completa / Complete Poetry by Jorge Luis Borges and Eva Luna by Isabel Allende. Unfortunately these literary works are probably too challenging for me given my level of Spanish. I also bought a science fiction novel, The Long Way to a Small, Angry Planet by Becky Chambers. I was going to pick up the latest Jurassic World,  Jurassic World: Dominion on DVD but it was twice as expensive as it should have been. I waited until I got home to buy this at Target.

This entry was posted in Pennsylvania, Travel and tagged Goggleworks, Reading Pagoda, Spanish. Bookmark the permalink.